Greek government calls the departure of the Oruc Reis from disputed area after weeks of tension ‘a positive step’. 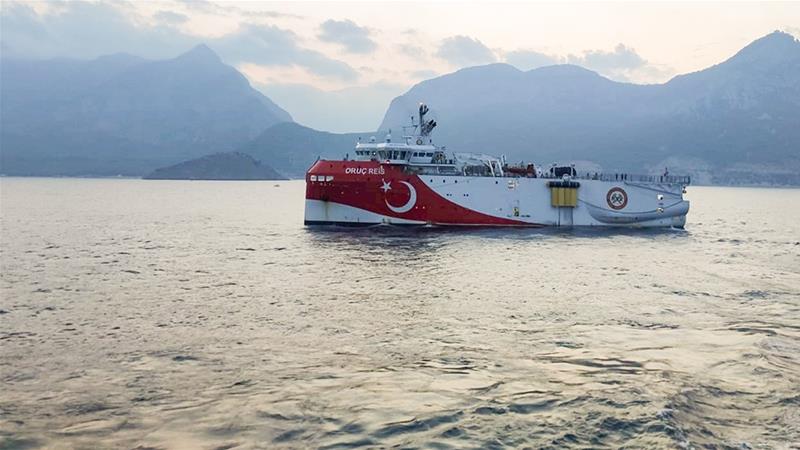 A Turkish seismic survey vessel, whose research in a disputed area of the eastern Mediterranean has been at the heart of a weeks-long standoff between Ankara and Athens, has returned to waters near the southern Turkish province of Antalya.

Neighbours and NATO allies Turkey and Greece have overlapping claims to continental shelves and rights to potential energy resources in the eastern Mediterranean. Tensions flared last month after Ankara sent Oruc Reis to map out possible oil and gas drilling prospects in waters claimed by Greece, Cyprus and Turkey.

Turkey’s navy had issued an advisory earlier this month saying that the vessel would continue operations in the area until September 12. Foreign Minister Mevlut Cavusoglu had said it would continue exploratory operations for longer but no extension to the advisory was issued as of noon on Sunday.

Refinitiv ship tracking data showed Oruc Reis, along with two accompanying vessels, had returned to a location just off the coast of Antalya on Sunday.

The return of the Oruc Reis near Turkey’s southern shore was welcomed by the Greek government.

“This is a positive step. We will see how this develops to make a proper assessment,” government spokesman Stelios Petsas told Skai, a television broadcaster.

The dispute over potential oil and gas reserves triggered a military build-up in the eastern Mediterranean, with Turkey and Greece both dispatching warships to the area and conducting military exercises to assert their claims.

Turkey has repeatedly said it is open to solving issues with Greece through dialogue but had publicly rejected any pre-conditions, including Oruc Reis halting operations, before negotiations.

Meanwhile, Turkish Minister of Defence Hulusi Akar said on Sunday in Antalya’s district of Kas that Turkey supports peace and dialogue “if our wishes and demands are fulfilled”.

His comments came as Greek President Katerina Sakellaropoulou visited the Greek island of Kastellorizo, located directly across the Mediterranean from Kas

The European Union, of which Greece is a member, has criticised Ankara for its actions and threatened sanctions as punishment.

Turkey rejects the criticism and says the bloc should remain impartial in the dispute, arguing that the waters where exploratory natural gas drilling was being conducted were part of its Turkish continental shelf.

Amid the tension, Mitsotakis on Saturday announced a “robust” arms purchase programme and an overhaul of the country’s military.

Mitsotakis is believed to have hammered out the programme after talks with French President Emmanuel Macron during a southern European leaders summit in Corsica this week. France has strongly backed Greece in its burgeoning showdown with Turkey, as well as Cyprus.

“You will have many more problems with me,” Erdogan said in a televised speech in Istanbul. “Don’t mess with the Turkish people. Don’t mess with Turkey.”

Separately on Saturday, US Secretary of State Mike Pompeo called for a diplomatic solution to the dispute between Greece and Turkey, saying continuing military tensions between the NATO allies only serve the alliance’s enemies.

“Increased military tensions help no one but adversaries who would like to see division in transatlantic unity,” Pompeo said after talks in Nicosia with Cypriot President Nicos Anastasiades.