Home » World News » Retracing Trump’s steps: A look at the week leading up to the president’s coronavirus diagnosis

WASHINGTON — The scene at the White House a week ago was one of normalcy in these most abnormal times: a crowd of revellers gathered in the Rose Garden, a band playing, the mingling of the elite, good cheer everywhere, handshakes and hugs left and right.

Now it’s a suspected petri dish of coronavirus infection, prominent among the numerous occasions over a week or more where President Donald Trump might have caught — or spread — the virus that has now landed him in the hospital.

No one knows how, when or from whom Trump became infected. Nor is it established who, if anyone, has contracted the disease from him. But to retrace some of his steps over the last week is to see risk at multiple turns and an abundance of opportunity for infection.

This was the case day after day and right up until a few hours before his positive diagnosis, as he took a contingent to New Jersey for a fundraiser while knowing he’d been close to someone sick with COVID-19.

The result is that one of the most protected people on the planet is now hospitalized, battling a disease that has killed more than 1 million people worldwide, more than 200,000 of them in the United States.

A look at days leading up to it: 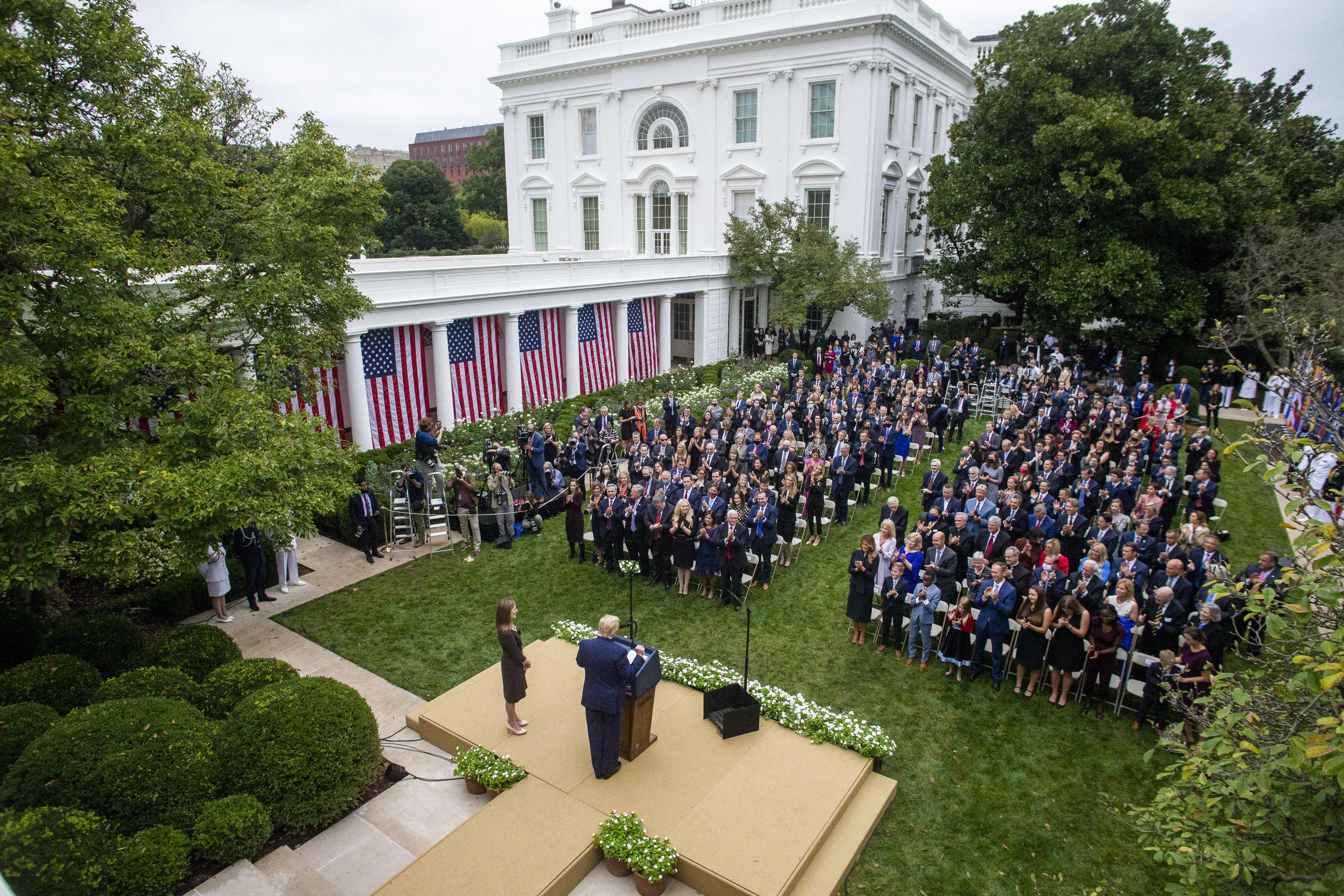 More than 150 people gathered in the Rose Garden for Trump’s introduction of Judge Amy Coney Barrett as his nominee for the Supreme Court. The event was highly social, but not distanced.

Few in the crowd wore masks; in fact, some guests were told it was safe to take them off after they received tests upon arrival, said Rev. John Jenkins, president of the University of Notre Dame, one of the attendees.

COVID-19 tests are not 100% reliable and do not rule out the possibility that someone might have an infection that is not yet detectable. The virus can incubate for days before a test will uncover it.

In the days that followed, a succession of attendees reported they had contracted COVID-19, among them Sens. Mike Lee of Utah and Thom Tillis of North Carolina and former counsellor to the president, Kellyanne Conway. Former New Jersey Gov. Chris Christie, seen in an AP photo with his arm around another guest while chatting up several face to face, announced his positive virus test this weekend.

“I regret my error of judgment in not wearing a mask during the ceremony and by shaking hands with a number of people in the Rose Garden,” he said in a message to the Notre Dame community.

“I failed to lead by example, at a time when I’ve asked everyone else in the Notre Dame community to do so.”

Public-health experts say Trump failed to lead by example, too.

That night he headed to Pennsylvania for a rally, followed Sunday by an outing to the golf course, a reception with Gold Star families, and a press conference during which he made not a single reference to the virus.

After a spirited send-off from the White House grounds, Trump and members of his team headed to Cleveland and the raucous presidential debate with Democrat Joe Biden. Adviser Hope Hicks was among them.

Everyone admitted to the hall was supposed to have been tested in advance and come up negative, the Cleveland Clinic officials who served as the debate’s health advisers said in a statement. “We had requirements to maintain a safe environment that align with CDC guidelines — including social distancing, hand sanitizing, temperature checks and masking.”

But most in Trump’s contingent — his adult children, senior staff and other VIPs — stripped off their masks for the duration of the debate, violating the rules. 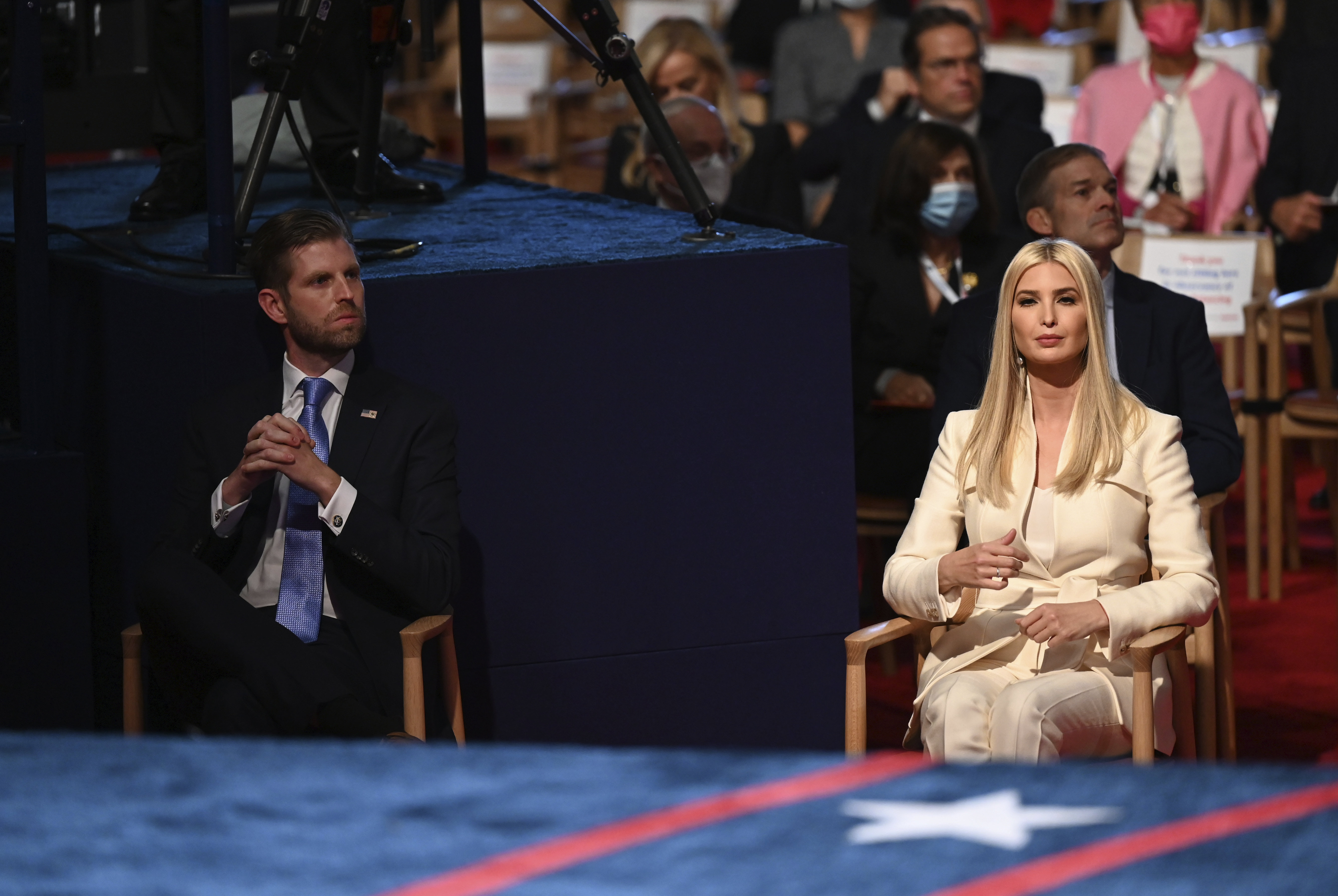 Moderator Chris Wallace, seated on stage, noted that when Biden’s VIP guests, including his wife, Jill, walked in, they were wearing masks and kept them on throughout the debate.

“I don’t wear a mask like him,” Trump said of Biden mockingly in the debate. “Every time you see him, he’s got a mask. He could be speaking 200 feet away from him and he shows up with the biggest mask I’ve ever seen.”

Said Biden: “He’s been totally irresponsible the way in which he has handled the social distancing and people wearing masks, basically encouraged them not to. He’s a fool on this.”

Trump and his team returned late to Washington, with much more on tap for the week and the election now just a month away. Trump’s campaign manager, Bill Stepien, who attended the debate and helped him prepare with Christie, has tested positive for COVID-19.

People around Trump are tested daily for the coronavirus and Hicks had her test in the morning, along with the others to be travelling with him for the day. Her results were negative. She joined others aboard Marine One for the 15-minute or so flight to Air Force One waiting for them at Joint Base Andrews.

Marine One is a single-cabin chopper, normally seating 10, a noisy aircraft with no partitions except between the president and the cockpit. Once at Andrews, it was on to Minnesota for a fundraiser followed by an outdoor rally in Duluth. 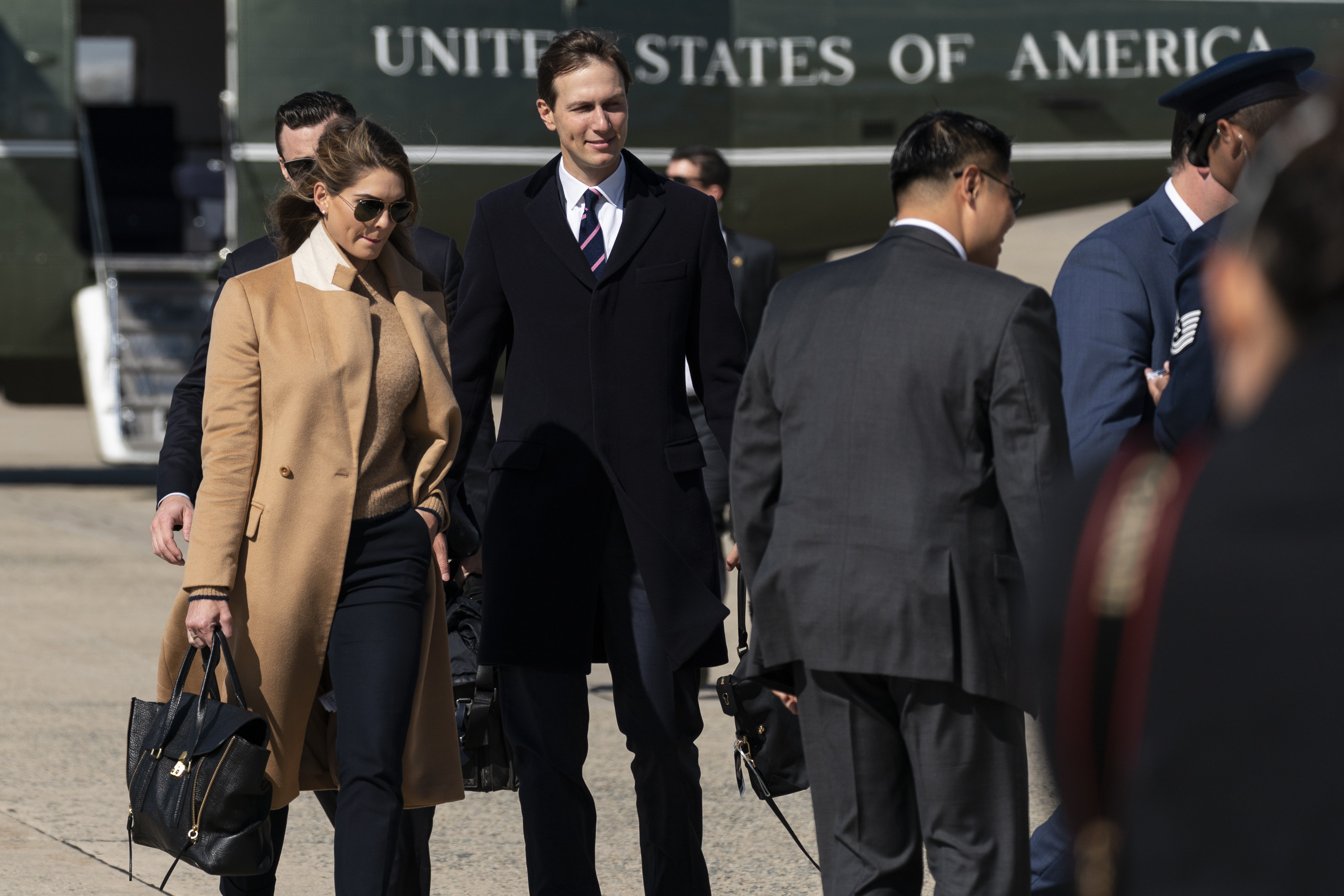 On the ground in Minnesota, Hicks reported feeling unwell.

It was blustery and cold in Duluth with a bit of a mist. As usual, few in the crowd wore masks. They heard Trump make his dubious promise of a vaccine by the end of the year and congratulate himself for doing a great job. “On November 3rd, Minnesota will decide whether we end this pandemic, defeat the virus, and return to record prosperity,” he said. “Either way, we’re returning. Either way.”

Trump’s speech was notably shorter than usual, 45 minutes instead of the usual one to two hours.

After his remarks, he mingled on stage briefly, pumping his fist to the beat of the Village People and waving to folks in the crowd. He did not speak to reporters before boarding Air Force One nor come back to speak with them on the flight.

Hicks kept apart from others on the big plane coming back and did not take the crowded Marine One back to the White House once at Andrews.

On Thursday morning, Hicks got another test. This time it was positive.

The results came not long before the president was set to lift off in Marine One for a fundraiser at his golf club in Bedminster, New Jersey.

Hicks’ diagnosis affirmed that Trump had been in close proximity to someone infected with the virus. That’s when you should quarantine, according to public-health guidelines. But Trump went ahead with the trip. Not only that, but others who had also been around Hicks were not immediately told about her positive test. 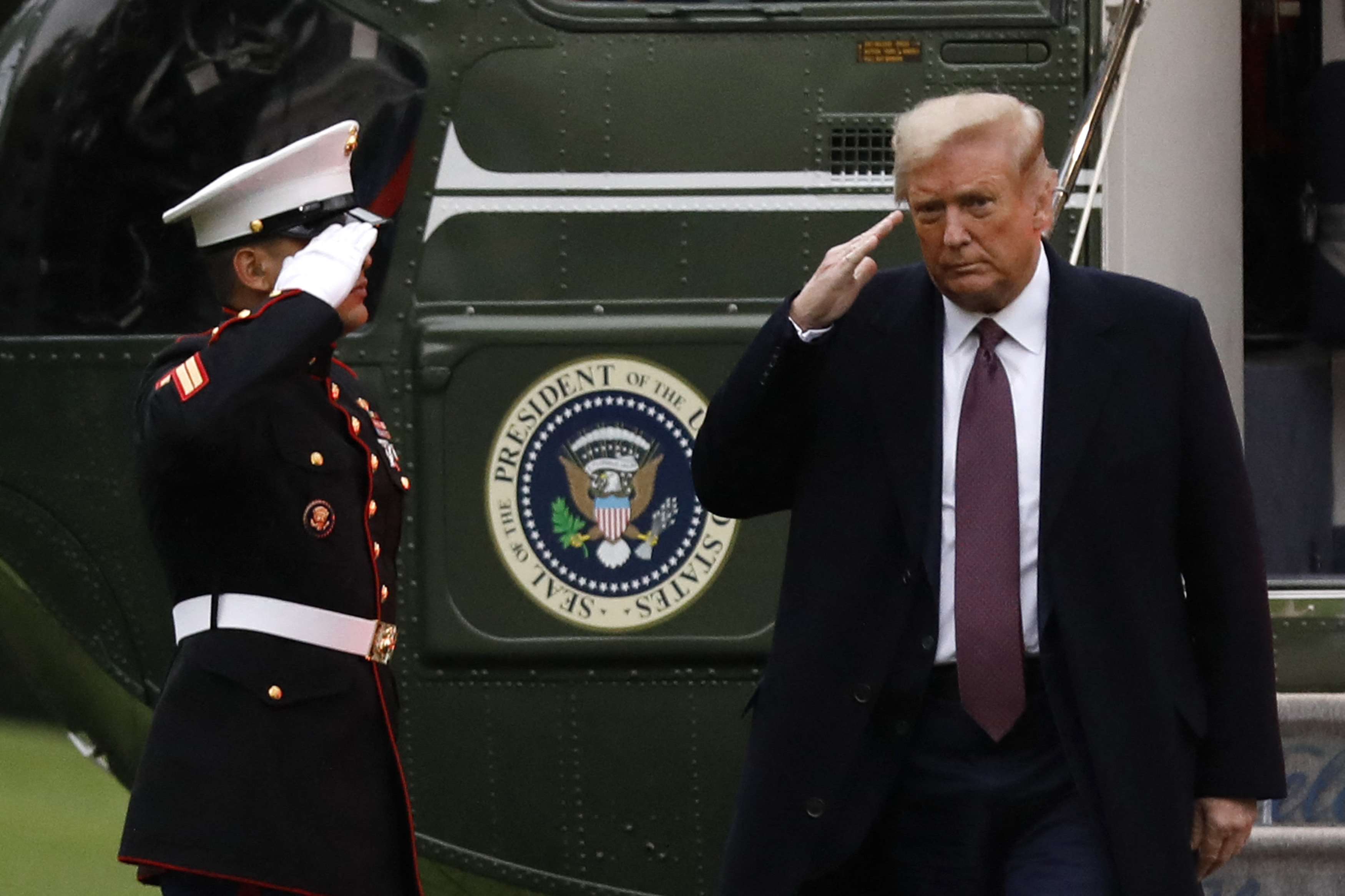 The White House worked furiously to swap out staff who had been in close contact with Hicks and replace them with others. Spokesman Judd Deere was swapped in at the last minute, without being told why. White House Press Secretary Kayleigh McEnany did not make the trip. White House officials said they began learning of Hicks’ positive test after Trump boarded Marine One to start his journey to New Jersey.

Comedian Joe Piscopo attended the outdoor Bedminster fundraiser and told The Associated Press by phone that “it was meticulously run, from the Secret Service to COVID testing to masking.”

“I’ve never seen him more on top of his game — warm, funny, vulnerable,” Piscopo said. “Like we say in New Jersey, he’s an animal. He’s going to be fine, and I mean that in a good way.”

Charlie Kolean, 25, of Dallas also attended the event, and described getting a nasal swab and negative results in 15 minutes, after which he joined a cocktail party of some 60 people. Staff at the event were masked but the guests weren’t, he told AP. VIPs had their pictures taken with Trump in another room, standing six feet from the president with no handshakes.

Hours after the Bedminster fundraiser, Trump publicly confirmed Hicks had tested positive and told Fox News he and his wife had been tested and were prepared to quarantine if necessary.

This chain of events during the week does not establish how or where Trump got the virus. Given the highly variable period between infection and sickness _ anywhere from a few days to two weeks _ he could have contracted it on any number of occasions from a variety of people.

At 12:54 a.m., Trump tweeted: “Tonight, @FLOTUS and I tested positive for COVID-19. We will begin our quarantine and recovery process immediately. We will get through this TOGETHER!” Flotus refers to Melania Trump, the first lady, who also has COVID-19.

Hours after that, Kolean got a “Dear Supporter” letter from the Trump campaign team saying: “We unfortunately write today to notify you that, as you have probably seen, President Trump confirmed late last night that he and the First Lady were tested for COVID-19 and produced positive test results.” The email urged attendees to contact their doctor if they developed symptoms.

Well wishes for the Trumps came in from around the world and from across the political divide, some of them with an I-told-you-so undertone.

Democratic House Speaker Nancy Pelosi pronounced the news “tragic, it’s very sad,” but also unsurprising given actions by Trump that were “sort of a brazen invitation for this to happen.” Biden kept to a simple statement saying “We will continue to pray for the health and safety of the president and his family.”

Before the day was out, Trump was admitted to a military hospital for a stay expected to last at least several days, in what White House officials initially said was merely a precaution. But his chief of staff, Mark Meadows, said Saturday that Trump went though a “very concerning” period Friday and it was revealed that he had been given supplementary oxygen at the White House Friday.

The next 48 hours would be critical to his care, Meadows said.

Despite the abject failure to keep the president protected from the virus, White House officials defended their current protocols as well thought out. And masks still won’t be required on the White House grounds for all West Wing employees. “Wearing a mask,” said one official, “is a personal choice.”