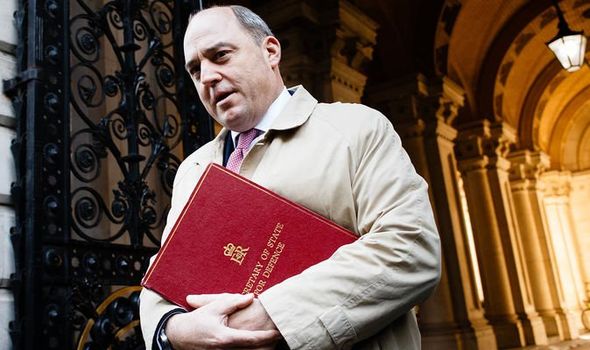 Mr Wallace also revealed Russia has “taken a deep interest” in underwater cables providing internet and communication links across continents. A new British ship will be equipped to protect them. He warned “the lights could go out” if they were successfully attacked and national infrastructure was lost.

“They have planned and deployed new capabilities, and that means if it’s going to remain credible it has to do the job.

Russia’s ambassador to Britain, Andrei Kelin, said the move was illegal and a “big surprise for the whole world”.

He said the political relationship between London and Moscow is “nearly dead” and claimed that ministers had “demolished” links by accusing Russia of the nerve agent attack in Salisbury, Wiltshire.

The new ship to protect vital undersea cables will come into service in 2024.

Mr Wallace told the BBC’s Andrew Marr Show yesterday that the new vessel’s job is going to be “to protect not only critical national infrastructure but other things. It will be able to do other surveillance functions around the sea and everything else and I think it is really important that we invest in that.”

It comes as Russia prepares to roll out its new submarine, the Belagrod, which will have the capacity to deploy mini-submarines to the sea bed to interfere with cables.

A new defence Command Paper will be unveiled today outlining the biggest overhaul in British defence since the Cold War and a new “leaner and meaner” military.

Mr Kelin said: “You are increasing a number of warheads by 40 percent.

“This is a violation of the treaty of non-proliferation and many, many other agreements that are saying only a decline or a reduction in the number of nukes.”