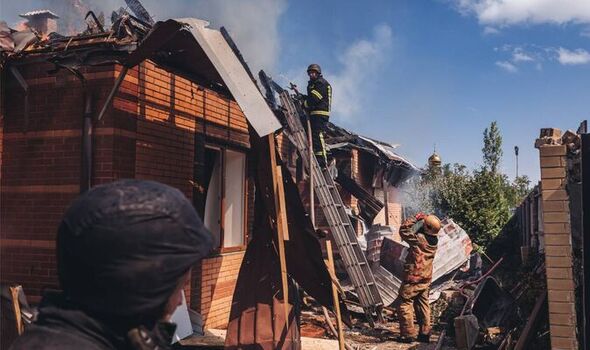 Kyiv said the shelling was relentless, with missiles hitting the cities of Bakhmut, Kramatorsk, Chasiv Yar, Sloviansk and Kostiantynivka, as well as surrounding villages. A spokesman said: “The operational situation in the region is that continuous shelling is underway all over the front line.

An agreement was reached in Turkey last week to allow safe passage for the millions of tons of grain stuck in silos in southern Ukraine.

A day after the deal was signed, Russia had launched two rockets into the Black Sea port of Odesa, but Ukrainian authorities said they now believed they may once again be able to start shipping out the grain.

Under the agreement, a safe passage will be established, with signed assurances that Russia will not attack ships sailing through it.

Meanwhile, Ukrainian President Volodymyr Zelensky’s wife Olena is this week appearing on a special digital front cover of Vogue. She told the magazine: “These have been the most horrible months of my life and the lives of every Ukrainian. Frankly I don’t think anyone is aware of how we have managed emotionally.”

“But we have no doubt we will prevail. This is what keeps us going.”

Liz Truss has announced more sanctions on Russia including Kremlin “officials” in Luhansk and Donetsk.

The Foreign Secretary said: “We will continue to impose harsh sanctions on those who are trying to legitimise Putin’s illegal invasion.”