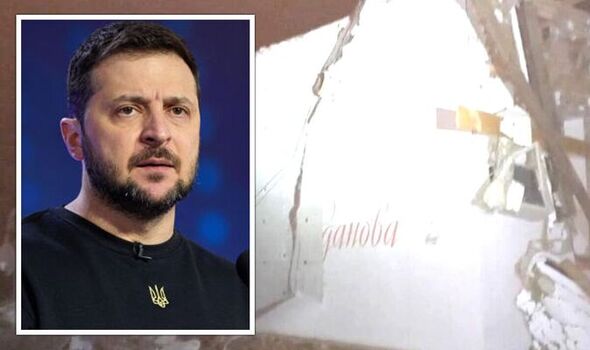 Ukraine: Russian Wagner base hit by missile strike in Svatove

As the conflict in Ukraine nears its tenth month, Kyiv has launched a number of successful counter-strikes against Russian occupying forces to the south and east of the country. Ukraine has been using longer-range US-supplied HIMARS to strike targets deeper in Russian territory as they prepare to advance on Crimea, which was annexed by Putin in 2014. Ukrainian officials have claimed that hundreds of Russian soldiers, including members of the brutal mercenary squad known as the Wagner Group, were successfully immobilised by precision missiles over the weekend and into the early hours of Monday morning.

Russian forces carry out mass strikes in the east

Russian forces carried out strikes against Ukrainian civilians in Donetsk on Sunday as a spokesman for the General Staff of the Armed Forces of Ukraine has claimed Putin’s forces are using innocent locals “as human shields”.

Oleksandr Shtupun said two Russian missile strikes hit “the civilian infrastructure of the city of Kostyantynivka, Donetsk oblast” on Sunday. He added that Russia carried out a further 11 strikes on Ukrainian forces along the front line in the east.

In Kherson, which was liberated last month, Mr Shtupun said Putin’s forces had “carried out more than 60 MLRS attacks on the civilian infrastructure of the city”.

And, he added: “In violation of International Humanitarian Law, the enemy continues to use civilians as human shields. In the village of Troitske in the temporarily occupied Luhansk oblast, the russian occupiers are placing military equipment and setting up firing positions near residential buildings where the civilian population lives.”

Russian military losses are closing in on 100,000 after a further weekend of brutal fighting.

According to the latest estimations by the Armed Forces of Ukraine, 94,760 Russian soldiers have been killed since the invasion on February 24, an increase of 620 compared to last week.

Additionally, Ukraine claimed that more than 280,000 Russian soldiers have been wounded and roughly 1,000 captured.

Roughly a third of those recent losses are believed to be from the devastation wrought by four HIMARS missiles used by Ukraine on the city of Melitopol to the west of Mariupol and roughly 150 kilometres from northern Crimea. Ivan Fedorov, the exiled mayor of Melitopol, has claimed that around 200 Russian soldiers have been killed in the southern Ukrainian city, which was occupied in March.

Kremlin officials have suggested the death toll is significantly lower, though they declined to give an exact figure.

Russia is “currently unlikely to achieve its objectives” in Ukraine

Russia is “currently unlikely to achieve its objectives” in Ukraine, the British Ministry of Defence has claimed.

After Kremlin spokesman Dmitry Peskov said last week that Russia’s main aim was to reclaim all territory within the four recently-annexed regions of Donetsk, Luhansk, Zaporizhia and Kherson, the MoD said there were no signs that Putin’s forces would be able to achieve that goal in the near future.

In their latest defence intelligence update, it read: “Russia’s strategy is currently unlikely to achieve its objectives: it is highly unlikely that the Russian military is currently able to generate an effective striking force capable of retaking these areas.

“Russian ground forces are unlikely to make operationally significant advances within the next several months.”

At the moment, Russian forces are currently trying to hold a defensive frontline from the east of Kharkiv in the north all the way down to Kinburn Split in the southwest.

A Ukrainian official has claimed that many Wagner Group soldiers have been killed after a strike in the town of Kadivka to the west of Luhansk on Saturday devastated one of their bases. Serhiy Gaidai, the governor of the Russian-occupied Luhansk region, told Ukrainian television that forces struck the site using HIMARS missiles.

Sources in Kyiv say the strike in Kadiivka resulted in ‘significant losses’, according to the Telegraph.

Photos posted on Telegram appeared to show a building largely reduced to rubble.

Mr Gaidai said those who survived the strikes did not have adequate medical services to be treated and “will die before they get care”.

He said: “I am sure that at least 50 percent of those who managed to survive will die before they get medical care,’ he said. ‘This is because even in our Luhansk region, they have stolen equipment.”

The Wagner Group is a vicious mercenary group of Russian soldiers made up of ex-offenders, those discharged from the Armed Forces and criminals. It is run by the oligarch and Putin-confidante Yevgeny Prigozhin, who reportedly enjoys a direct line to the Russian leader.

The group are renowned for their brutality and last month, a 55-year-old Wagner fighter from Russia, Yevgeny Nuzhin, was brutally beaten to death with a sledgehammer after defecting to Ukraine.

Footage in the summer showed Prigozhin recruiting soldiers from Russian prisons, telling murderers and rapists that, should they serve six months in his regiment, they would be then freed from incarceration.

Ukrainian forces struck Wagner Group soldiers in the eastern city of Svatove in the early hours of Monday, footage has shown. Reports have claimed there were “many fatalities” as a result of the strikes. One video shows one of the Russian mercenaries shouting “F***, there is not half a hostel here” as they inspect the damage.

Another video shows a wounded mercenary fighter holding a fellow Wagner Group soldier, who appears to no longer be alive.

Good morning from London. I’m Tom Watling, I’ll be bringing you all the latest developments on the war in Ukraine. Please feel free to get in touch with me as I work if you have a story or tips to share! Your thoughts are always welcome.