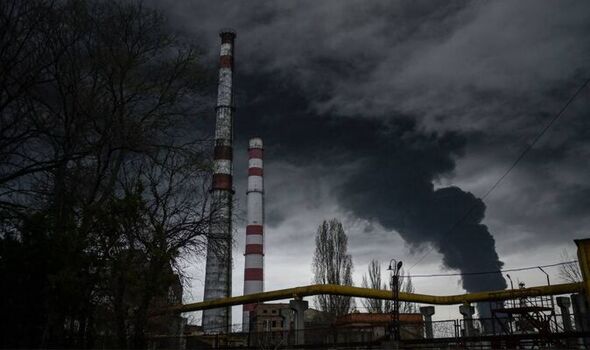 Meanwhile, Prime Minister Boris Johnson is understood to be keen to supply Ukraine with anti-ship missiles to defend against amphibious landings.

Sergey Nikiforov, a spokesman for President Volodymyr Zelensky, made his remarks just hours after Moscow claimed to have destroyed “critical infrastructure”, including a fuel depot, close to Ukraine’s southern port of Odesa early yesterday (Sunday).

“They’re amassing their forces. They’re preparing to concentrate their efforts in the east. The only part of Ukraine where they are having some progress is the east.”

In what would be a highly significant development, Illia Ponomarenko, defence reporter with the Kyiv Independent, tweeted: “That’s it. The Ukrainian military has secured the Belarussian-Ukrainian border in Kyiv region.”

Odesa, located on the Black Sea’s north coast, is the main base for Ukraine’s navy and has been a focus for Russian forces because if it is taken it would enable Moscow to build a land corridor to Transdniestria, a Russian-speaking breakaway province of Moldova which hosts Russian troops.

Russia’s defence ministry said missile strikes by its military destroyed an oil refinery and three fuel storage facilities near Odesa, adding that the facilities were used by Ukraine to supply its troops near the city of Mykolaiv.

Posting on Telegram, Vladyslav Nazarov, an officer of Ukraine’s South Operational Command, said: “Russia began with a missile strike. The Odesa region was among the priority targets. The enemy continued its vile practice of strikes against critical infrastructure. Smoke is visible in some areas of the city. All relevant systems and structures are working … No casualties reported.”

Dmytro Lunin, governor of the central Poltava region, said the Kremenchug oil refinery, 350 kilometres (220 miles) north-east of Odesa, had been destroyed in a separate rocket attack on Saturday.

Vika, a local resident who declined to give her surname, said it was not “a good morning for Odesa”. She added: “We woke up to powerful explosions near our home. There was smoke, the children were in a panic, the windows were blown in – it was terrifying.”

He explained: “The fire at the refinery has been extinguished but the facility has been completely destroyed and can no longer function.”

British military intelligence said Russian naval forces were maintaining a blockade along the Black Sea and the Sea of Azov, but the option of amphibious landings was becoming increasingly high-risk for Russia. It said reported mines, the origin of which remained unclear and disputed, posed a serious risk to shipping in the Black Sea.

One insider told the Sunday Times: “The next target is Odesa. It’s not tanks which are going to come at Odesa. It’s going to be ships.”

The UK has supplied Ukrainian ground forces with Next generation Light Anti-tank Weapon (NLAWS) missiles – but the source said: “NLAWs don’t work against ships, so what does?

“They want the kind of stuff that can take out ships.

“The PM is eager and determined to help find that. We don’t have everything they need for the next stage but we have become the default co-ordinator of other countries.”

One expert suggested the attack was likely an attempt to weaken the country’s war effort, rather than a precursor to any attempt to take the city, suggesting Russia would struggle to do so as things stood.

Sam Cranny-Evans, a Research Analyst in Military Sciences at the Royal United Services Institute (RUSI), said: “It seems at the moment that the Russians would struggle to take Odesa and maintain pressure on Ukrainian forces in Donbas.

“It is possible that they are trying to hit critical infrastructure that supports Ukraine’s war in the rest of the country in that case, as opposed to planning an attempt to seize the city. I don’t think they currently have sufficient forces and means to do it with realistic chances of success.”

Referring to Ukraine’s military force in the east of the country, centred on the Donbas region, Mr Cranny-Evans added: “If they are pragmatic in their approach they would focus on defeating the Joint Forces Operation (JFO) rather than spreading themselves thin again in an attempt to take Odesa.  It’s at least 90 miles from Kherson, which means they would likely have to stop on the way to regroup their logistics before heading for Odesa.

“Then, fighting in a city is time-consuming and very violent – look at Mariupol. It would be a similar commitment in forces and resources.

“I would have thought that given the current state of the campaign, they would opt to focus on something more achievable in the short term. Their campaign hasn’t made a huge amount of sense thus far.”