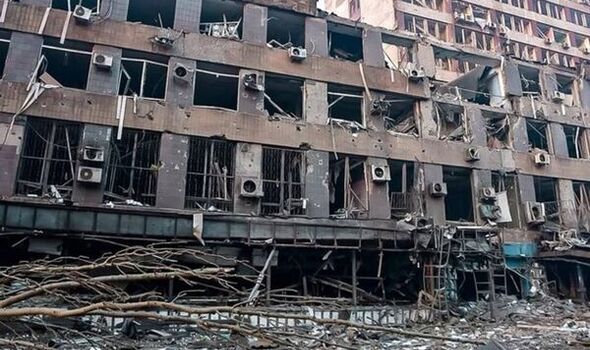 Missiles destroyed an art school in the besieged southern city of Mariupol where an estimated 400 people were sheltering, the city council confirmed yesterday. It follows the targeting of a theatre last week, where 1,300 people had taken cover from the bombardment, and the city’s maternity hospital the week before.

President Volodymyr Zelensky said the siege of Mariupol was “a terror that will be remembered for centuries to come”.

And it confirmed a warning from the British Ministry of Defence (MoD) that Putin is targeting civilian areas in order to bomb Ukraine into submission and bend it to his will.

Russia launched cruise missiles from ships in the Black Sea and Caspian Sea and hypersonic rockets from Crimean airspace as reports grew of Mariupol residents being forcibly deported to ­“filtration camps” in Russian territory.

There was no confirmation of casualties from the art school attack, but the council said victims were trapped under rubble.

Meanwhile, efforts to rescue survivors from the theatre ruins are being hampered.

Intensifying hand-to-hand combat in the city is slowing down the operation. Only 130 ­civilians have been saved so far with hundreds, mainly women and children, still unaccounted for.

And many of the key port’s 400,000 residents remain trapped in “medieval” conditions with little or no food, water and power.

Mariupol police officer Michail Vershnin said: “Children, elderly people are dying. The city is destroyed and it is wiped off the face of the earth.”

The attack was said to have taken place in Kreminna in the Luhansk region of eastern Ukraine about 80 miles from the Russian border 10 days ago.

Deputy Prime Minister Olha Stefanishyna also alleged “women have been raped for hours and then murdered” by Russian soldiers.

She said: “They commit the worst crimes and they’re doing a targeted attempt on the Ukrainian population.

“It’s not a question, it’s simply the reality we are all facing in the 21st century.”

Asked if she believed it was genocide, Ms Stefanishyna told Sophy Ridge On Sunday on Sky News: “I absolutely believe it.”

However, via its Telegram account, the city council disputed the characterisation, saying: “Over the past week, several thousand Mariupol residents were deported onto the Russian territory.”

Mayor Boichenko said: “It is known that the captured Mariupol ­residents were taken to filtration camps, where the occupiers checked people’s phones and documents.

“After the inspection, some residents were redirected to remote cities in Russia. The fate of others remains unknown. What the ­occupiers are doing is familiar to the older generation, who saw the horrific events of World War Two, when the Nazis forcibly ­captured people.”

Ukrainian MP Inna Sovsun said: “Russians are behaving as terrorists and like Nazis. They bomb maternity hospitals, orphanages, kindergartens, homes for the elderly. Filtration camps is just another method of their treatment, now on the partially and temporarily occupied territories.”

Linda Thomas-Greenfield, US ambassador to the United Nations, described the reports as “disturbing and unconscionable”.

Putin’s war has cost the lives of at least 902 Ukrainian civilians and injured 1,459 more, said the UN human rights office (OHCHR) yesterday, with the actual figure likely to be considerably higher.

Meanwhile, Russia claimed it unleashed some of its high-tech artillery to kill more than 100 Ukrainian servicemen at a training base near the village of Ovruch, in the Zhytomyr region yesterday.

Henry Wilkinson, the chief intelligence officer at security intelligence firm Dragonfly, believes that Putin is trying to send a threatening message to Nato.

He said: “The value of hypersonic weapons is that they can penetrate anti-missile defences but the tactical value of the target, in this case, seems disproportionately low to the value of the weapon used.

“So it seems reasonable to assume the use of the weapon and the location of the target so close to a Nato member state’s border was to serve a strategic purpose, of signalling to Nato and the West generally that Russia has this capability and it’s willing to use it.” Footage also showed Russian forces firing deadly thermobaric rockets.

Moscow defence sources claimed: “The TOS-1A Solntsepek was used against Ukrainian nationalists by the people’s militia of the Donetsk People’s Republic with the support of the Russian army during a special operation in Ukraine.”

Thermobaric warheads are also known as vacuum bombs. They are filled with an aerosolised fuel and metal components which, when ignited, produce temperatures of up to 2,700 centigrade – which is enough to melt human organs.

Meanwhile, the latest intelligence update from the MoD said Russian forces were only making “limited progress” in capturing cities in the east of Ukraine.

It added: “Instead, Russia has increased its indiscriminate shelling of urban areas resulting in widespread destruction and large numbers of civilian casualties. It is likely Russia will continue to use its heavy firepower to support assaults on urban areas as it looks to limit its own considerable losses.”

Volyn region, to the north of the western city of Lviv.

But it was not clear last night if it was expecting the attack to be conducted by Russian forces or the Belarusian military.

Ukraine yesterday claimed its forces had shot dead the deputy commander of Russia’s Black Sea Fleet in another significant blow to Putin’s forces.

First rank captain Andrey Paliy, 51, is the only senior naval officer allegedly killed ­so far during the war in Ukraine, which has been raging for nearly a month, although Kyiv claims to have slain five army generals.