Analysts say Ukraine’s Zelenskyy might come to regret hiring Saakashvili, who is known to be a temperamental politician. 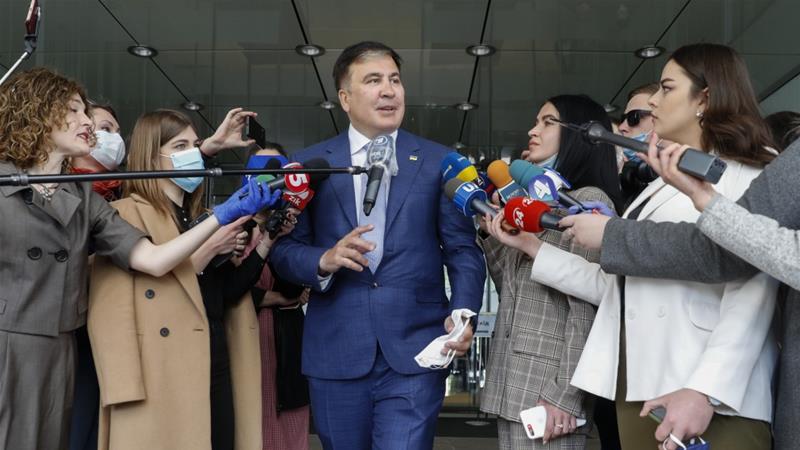 Earlier this week, Saakashvili said he had been invited to join the government of President Volodymyr Zelenskyy, whose candidacy he supported in an election last year.

As deputy PM, he will be in charge of leading reforms, but some say Zelenskyy is bound to come to regret his decision.

The 52-year-old maverick politician, who transformed his native Georgia by cracking down on rampant corruption and carrying out democratic reforms during his presidency between 2004 and 2012, has a history of turning against the presidents who invited him to their team.

“I hope to be a reliable member of the team and come in handy for the people of Ukraine,” Saakashvili said in a statement.

“I also hope to use my international experience in order to be useful to members of [Prime Minister Denys Shmygal’s] government, including in relations with international financial organisations, to strengthen the prestige of Ukraine.”

Ukraine is seeking financial assistance from foreign backers, including an $8bn fund from the International Monetary Fund (IMF), to cushion its economy which is expected to shrink by nearly 5 percent this year due to the coronavirus pandemic.

On Friday, Saakashvili told the Financial Times newspaper: “The president wants me to be in charge of talks with the IMF … I have experience.”

At the time of publishing, Saakashvili had not responded to Al Jazeera’s request for a phone interview.

In 2003, he overthrew Georgia’s second president, Eduard Shevardnadze, in a bloodless revolution just three years after the longtime leader appointed Saakashvili as his justice minister.

In 2016, Saakashvili turned against Zelenskyy’s predecessor, Petro Poroshenko, who a year earlier invited him to Ukraine from his exile from politics in Georgia, gave him Ukrainian citizenship, and made him governor of the Odesa region.

Poroshenko regretted his choice after Saakashvili resigned, accusing him of protecting corrupt politicians and demanding the president’s resignation.

But Zelenskyy, a former comedian elected president last year, believes Saakashvili “has the potential to support the government of Ukraine”, his office said on Wednesday.

Kyiv-based political analyst Peter Zalmayev told Al Jazeera he was “sceptical regarding Saakashvili’s ability to make a difference” in Ukraine despite his reputation as “an able reformer”.

“It is certainly a bold and risky move. As his stint in Odesa proved, Ukraine isn’t Georgia and is a much less hospitable terrain for a foreign adventurer, no matter how well-meaning,” Zalmayev said, referring to his failure to carry out promised anti-corruption reforms during his governorship.

“Saakashvili, despite his massive charisma and uncanny ability to woo the street with his populism and colourful theatrics, has time and again failed to persuade members of Ukraine’s political elite to accept him as an equal-opportunity player,” he said. 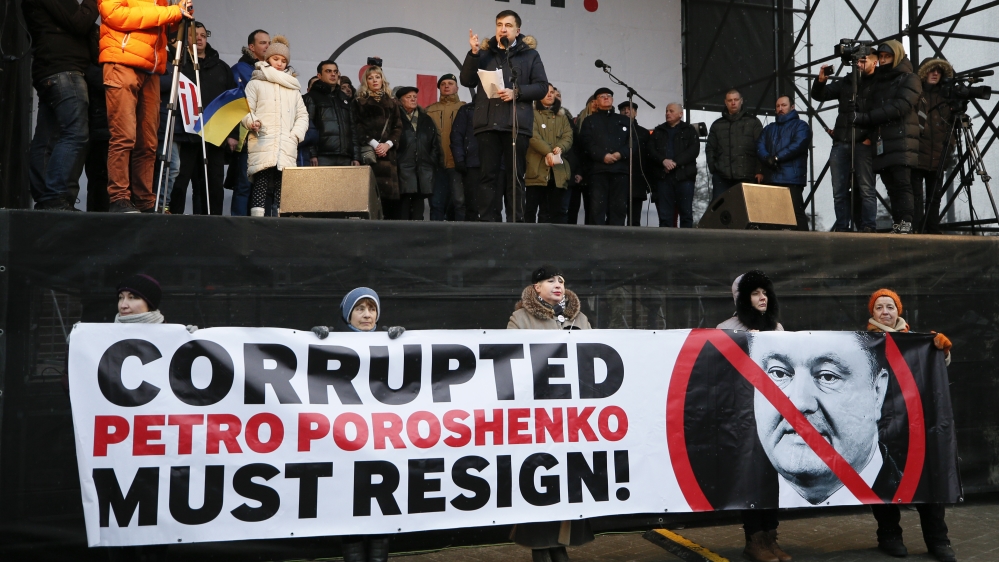 Volodymyr Fesenko, director of the Center for Political Studies “Penta”, said Zelenskyy started the search for a deputy prime minister in January.

Saakashvili’s name came up only after a shortlist of others shrunk: Some candidates rejected the job offer, others did not get the president’s approval.

“Very many people don’t like Saakashvili in Ukraine. His experience in Odesa showed that he is very confrontational and temperamental,” Fesenko said.

“At the time, he first entered a confrontation with the prime minister, later with the interior minister and finally President Poroshenko himself.”

Fesenko explained there was a risk that a similar conflict could emerge.

“Especially because the current government includes Arsen Avakov who had a very bad relationship with Saakashvili back then,” Fesenko said, referring to the all-powerful interior minister who is a hold-over from the Poroshenko era.

Seeing Saakashvili’s mission as a nearly guaranteed failure, Fesenko said unlike Georgia, which has a population of 3.7 million, Ukraine – home to nearly 44 million, was “a large country with even larger problems”.

“The scale of our corruption is also bigger and the political decisions are made in a more difficult way. The main difference is that in Georgia, he was a president, the main decision-maker. Here, he will be just a deputy of the prime minister.”

Similar to his Ukrainian colleagues, a political analyst in Georgia, Ghia Abashidze, who is associated with the south Caucasian nation’s current government, believes that Ukraine could send Saakashvili packing for the second time.

“The country’s leader wants to demonstrate to the West that he still has Euro-Atlantic aspirations. Zelenskyy also hopes, with Saakashvili’s help, to balance Interior Minister Arsen Avakov’s overwhelming influence in the government,” Abashidze told Al Jazeera.

“And last but not least, the Ukrainian president hopes – and perhaps there is already an agreement – with the hands of Saakashvili to begin to pursue former President Poroshenko, digging out and showing the public his corruption schemes.

“But as soon as Ukraine’s leadership, realise that they failed to outplay Saakashvili they will make every effort, like Poroshenko, to get rid of him. And all oligarchs will help them in this. And the whole bureaucratic apparatus. Interests will quickly coincide,” Abashidze said.

Saakashvili could jeopardise peace agreements reached between Zelenskyy and Russia’s President Vladimir Putin over the conflict in eastern Ukraine between Moscow-backed separatists and Kyiv, said Abashidze.

Putin and Saakashvili have a history of animosity – years of public personal insults by both parties and Saakashvili’s efforts to eliminate Russia’s influence on Georgia, leading to a brief but bloody Russia-Georgia war in 2008.

“Saakashvili will bring in the ‘anti-Russian virus’ in the Ukrainian government. His anti-Putin rhetoric will encourage the Kremlin to send more help for Donetsk and Luhansk separatists,” said Abashidze.

“Coronavirus has devastated Russia’s economy and the Kremlin’s image. Restoration of the public trust inside Russia, according to Putin’s logic, is a small victorious war in the neighbourhood,” he said.

“[It is] very likely Mikheil Saakashvili might help Putin to develop that worst-case scenario for Ukraine.”

In the best case, according to Zalmayev, “having observed with great pleasure the kind of political havoc Saakashvili was able to wreak for his former protege Poroshenko, Putin is probably getting out his popcorn bowl in expectation of the second instalment of his favourite nemesis’ adventures in the ‘brotherly’ southern neighbour”. 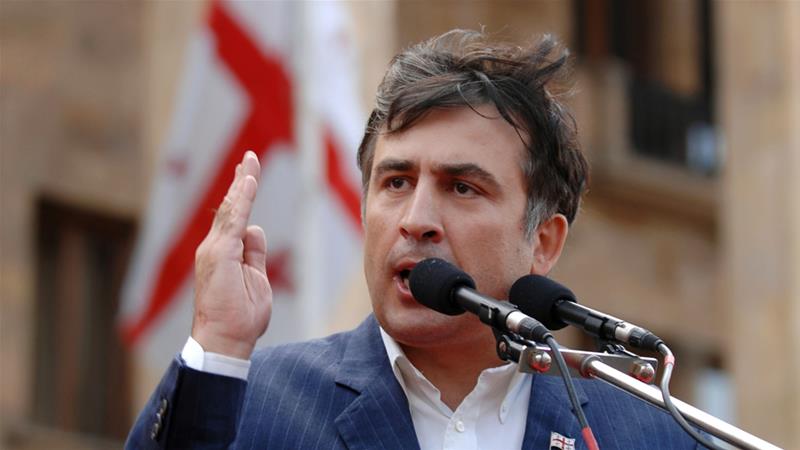 Saakashvili on Putin, Europe’s weak leaders and a return to power