Russia plans to share preliminary results of its COVID-19 vaccine trial based on the first six weeks of monitoring participants, raising the tempo in an already frenzied global race to end the pandemic.

Alexander Gintsburg, head of the Gamaleya Institute that produced the Sputnik V vaccine, told Reuters that the pace of its development was necessary under the “wartime” conditions of a pandemic but no corners were being cut.

Russia has pushed ahead with its potential COVID-19 vaccine at top speed, with mass public vaccinations alongside the main human trial, raising concerns among some observers that it was prioritising national prestige over solid science and safety.

“People are dying just like during a war,” said Gintsburg, holding a crystal model of a coronavirus in his hand. “But this fast-tracked pace is not synonymous, as some media have suggested, with corners being cut. No way.”

Sitting in his wood-panelled office at the institute in Moscow, Gintsburg said his team had been set a tight deadline to produce a vaccine but that all guidelines for testing Sputnik V’s safety and efficacy had been followed.

The plan to publish interim results based on the first 42 days of monitoring volunteers means Russia has a high chance of becoming the first worldwide to announce any data from a final-stage, or phase-three, trial.

The first of 5,000 volunteers was vaccinated on September 9, which means interim results could be issued some time after October 21. Russia’s sovereign wealth fund, which has invested in the vaccine’s roll-out, has said it expects interim results to be published in October or November.

Several Western developers are conducting final-stage trials that have already been going on for more than 42 days but have not published any interim results.

Drugmakers have said they would wait until they have enough infections to get a reliable read-out from the data before publication, rather than assigning a specific date.

Gintsburg said there was a public interest argument for sharing interim results after 42 days as they would show the general trend in the data.

“For me, for example, it is too short. But for people who are interested in how things are going, it is already too long.”

Gintsburg said volunteers would be monitored for 180 days after the last of 40,000 participants was vaccinated. Six months on, his team plans to tally final results and publish them in an international journal.

Their early-stage trial results were peer-reviewed and published in The Lancet.

In parallel with the trial, Russia began inoculating members of the general public considered at high risk on September 8, another unconventional move by Moscow in the race for a vaccine.

About 400 people have been inoculated so far, according to the health ministry. They undergo a less rigorous medical exam than trial volunteers, though they can submit data about their health following inoculation via an online platform.

A government source told Reuters the interim phase-three trial results would likely inform a decision on whether to expand this mass inoculation drive, starting with people over 60.

Gintsburg said no serious side-effects had been reported during the phase-three trial so far, while minor, anticipated side-effects had occurred among just 14 to 15 percent of the volunteers. A quarter of the participants receive a placebo.

He also defended the vaccine’s early registration for public use, saying it was the most ethical approach.

“The choice was between giving people the opportunity to protect themselves, or letting them play roulette with this deadly infection.”

He also said Russia was aiming for the vaccine to be about 75 percent more effective than a placebo, which is above the 50-percent threshold for COVID-19 vaccines set by the US Food and Drug Administration.

Gintsburg said having 40,000 trial participants meant the trial would be effective even with low levels of COVID-19 transmission in the Russian capital.

“It guarantees that even with a low infection rate, we would still have statistically significant data.”

Moscow registered 642 new cases of COVID-19 the day the trial began. The infection rate has risen since, with 2,217 new cases on Monday, though that is still well below a peak of approximately 6,000 daily infections in the capital in early May. 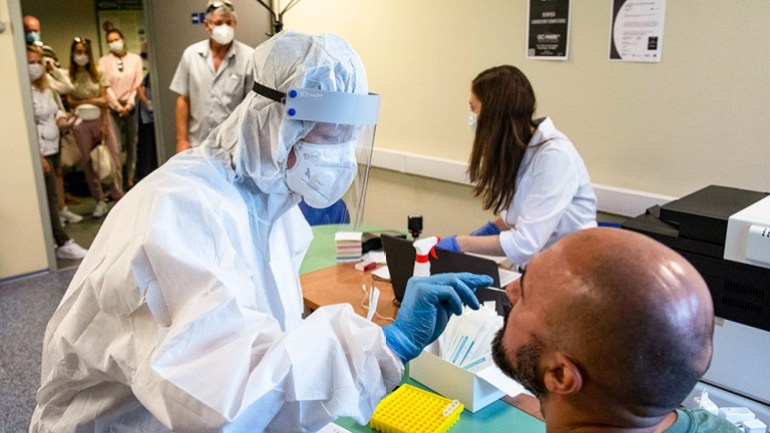 A medical worker performs a COVID-19 test at a test centre outside Moscow. Russian authorities say they are about to approve a COVID-19 vaccine, with mass vaccinations planned as early as October 2020, although clinical trials will not be complete. Scientists worldwide warn that the rush could backfire and point to ethical issues that undermine confidence in the Russian studies [Pavel Golovkin/AP]Other vaccine-makers have launched mass trials in countries such as Brazil, South Africa and the United States, searching for places where the disease is still rife after the epidemic came down from its peak in Europe.

Russia also plans to test in several countries, including Belarus, Brazil and India.

Drugmakers have also pledged to ensure their larger clinical trials include diverse sets of volunteers in terms of race, ethnicity, gender, age and other factors.

Russia is setting phase-three quotas by age to ensure a sufficient number of elderly participants, Gintsburg said, but no other special groups were being formed. More than a fifth of those vaccinated in the trial so far have been over 50, he said.

The rate of transmission among trial participants affects the timing of when many vaccine-makers plan to publish interim results as they need to record a certain number of COVID-19 infections before early data can be shared.

British drugmaker AstraZeneca launched a phase-three trial for its vaccine in May and has not yet disclosed any trends.

US pharmaceutical giant Pfizer, which is developing a vaccine with German partner BioNTech, and US vaccine maker Moderna both began their trials in late July. Neither has made any preliminary disclosures yet.

BioNTech has said it may have data for a regulatory filing by the end of October or early November.

In a bid to speed up the process of finding a vaccine, Britain is planning to host trials where volunteers are deliberately infected with COVID-19.

Gintsburg said this kind of trial was impossible in Russia and considered unethical: “We were surprised by the news.”