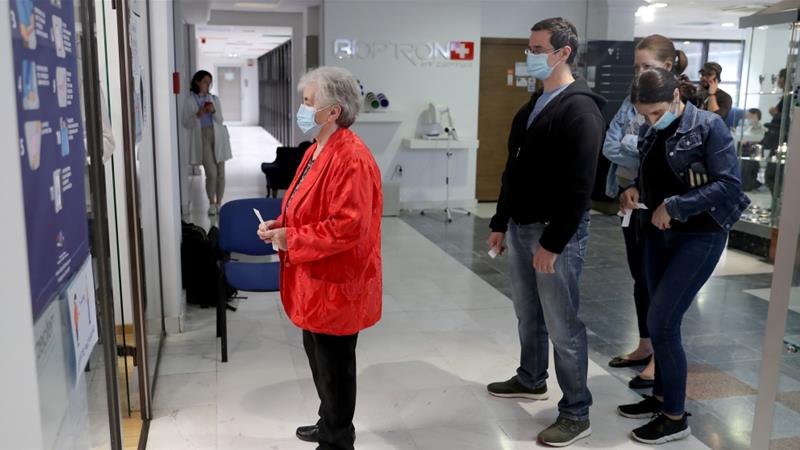 The centre-right Serbian Patriotic Alliance led by former water polo player Aleksandar Sapic is seen in third place with 4.1 percent of the votes.

Polling stations were equipped with face masks and hand sanitisers for the country’s electorate of almost 6.6 million, many of whom were expected to skip voting – partly because of fears of coronavirus infection.

Ipsos and CeSID saw turnout at 48 percent compared with 56.7 percent in 2016. The State Election Commission is due to announce preliminary results, including turnout, later in the evening.

Turnout was hit by a boycott by some opposition parties, who say the vote will not be free or fair owing to Vucic’s grip on the media.

It was the first national election in Europe to take place during the coronavirus epidemic. The voting, initially planned for April but postponed because of the pandemic, comes as Serbia is still reporting dozens of new cases daily after completely relaxing its strict lockdown rules.

President Vucic’s party had earlier on Sunday appeared set for a landslide victory, having faced little challenge from the divided opposition.

“I am very pleased that today until midday there were no serious irregularities, that the elections are held in a democratic atmosphere,” Vucic said after voting in Belgrade. “I hope for a success. I hope for a good result.”

While Serbian voters are not choosing a president Sunday, Vucic has dominated the campaign through the mainstream media which he controls, denouncing and ridiculing his critics. He has refuted allegations of abusing his formal ceremonial powers as president by taking a leading role in the campaign.

“For the last four years, we really gave our utmost, so I hope that today Serbian voters will come out and confirm that they are satisfied with our work,” Serbian Prime Minister Ana Brnabic said at a voting station in Belgrade.

“I hope people will today give their trust to President Aleksandar Vucic and his team.”

Citing the lack of free and fair voting conditions and a danger to public health, several main opposition groups are boycotting the vote. But a number of smaller parties decided to run, saying the boycott would only sideline an already marginalised opposition.

Sergej Trifunovic, a prominent Serbian movie actor and the leader of an opposition group that broke ranks with the main pro-boycott group, said if you want to be a politician, you have to be in parliament.

“It’s very important that, with gloves and masks, you protect your health and by using a pen (for voting) you maintain your dignity and defend your freedom,” he said. “So, all of you, go out and vote.”

Authorities have said that voting was no more risky than going to a shop or any other closed space.

A former extreme nationalist, Vucic briefly served as information minister in the government of late strongman Slobodan Milosevic during the 1990s wars in the Balkans. While Vucic now says he seeks European Union membership for Serbia, critics warn that democratic freedoms have eroded since his party came to power in 2012.

The president has called on his supporters to vote in large numbers to get a strong mandate for internationally mediated peace negotiations on the future of Serbia’s breakaway former province of Kosovo.