More heavy snow is forecast for the east and south-east of England, with the Met Office warning of “bitter cold” due to Storm Darcy’s strong easterly winds. BBC Weather forecasters have warned more snowfall in some eastern parts of the country could see the areas hit by up to 15cm of snow on Monday. The Met Office has issued a new weather warning covering large parts of Lancashire. This came into force at 12am this morning (February 8) and will run until 11.59pm on Wednesday.

Snowfall of up to 5cm is likely, and this could even reach as much as 10cm in areas where this is prolonged.

Britons have also been warned icy conditions will develop throughout the region this week, causing treacherous surfaces in places.

This comes following widespread snowfall in eastern regions of the UK, as well as 14cm of snow recorded at Manston in Kent, on Sunday evening as temperatures plummeted sharply.

A Met Office spokesperson said: “Snow showers will feed off the North Sea into many northern and eastern areas of the UK. 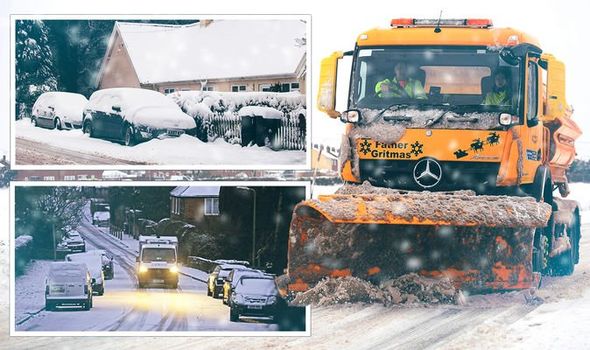 “Whilst some areas in the warning area will remain largely dry, some persistent bands of showers are likely to develop in places.

“Daily accumulations of 2-5 cm are probable for some, with 10-15 cm plausible in areas where showers merge into more organised and prolonged spells of snow.

“Some icy stretches are possible overnight, mainly where melting snow during the afternoon has not a chance to dry out before freezing overnight, although snow is likely to be more prevalent.”