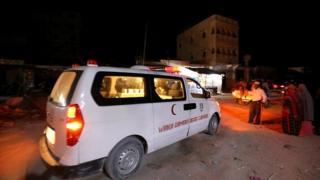 At least five people have reportedly been killed after a gun and bomb attack on a hotel in the Somali capital, Mogadishu.

A vehicle packed with explosives was rammed into the back of the Elite Hotel in the Lido beach area, after which gunmen stormed the building and took hostages, reports said.

Security forces are said to be trying to regain control of the hotel.

No group has so far said it is behind the attack.

However, the Islamist militant group al-Shabab has carried out similar attacks in the past.

“There is still sporadic gunfire and the initial information we have received indicates five people died and more than 10 others were wounded,” government security official Ahmed Omar told AFP news agency.

“The death toll can increase because the blast was massive and there is a hostage situation involved.”

Some reports have put the death toll at 15.

“There is chaos and people are fleeing from nearby buildings,” he said.

The hotel is frequently used by government officials and the privately-owned Somali news website Dhacdoone described it as one of the most heavily guarded facilities in Mogadishu.

Al-Shabab, which is linked to al-Qaeda, has been waging a brutal insurgency in Somalia for more than a decade.

It has been pushed out of Mogadishu by government and African Union troops, but the group still carries out bombings and assassinations in the city.

Last week a shootout between jailed al-Shabab members and security officers at a prison claimed at least 20 lives.

The militants – who had managed to obtain weapons – had tried to escape from a heavily guarded prison in Mogadishu.