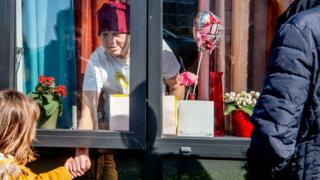 Swiss authorities say it is now safe for children under the age of 10 to hug their grandparents, in a revision to official advice on coronavirus.

The health ministry’s infectious diseases chief Daniel Koch said scientists had concluded that young children did not transmit the virus.

However, he said such meetings should be brief and not involve babysitting.

Switzerland is one of several European countries beginning to ease their lockdown measures.

This week, garden centres and hairdressers have been allowed to open their doors. Schools and shops selling items other than food will be allowed to reopen in two weeks’ time.

Dr Koch told a news conference this week that the original advice to keep distance between children and their grandparents was made when less was known about how the coronavirus was transmitted.

“Young children are not infected and do not transmit the virus,” he said. “They just don’t have the receptors to catch the disease.”

Dr Koch said that many grandparents “live to see their grandchildren” and that it was important for their mental health. He said it was not the children who posed a risk to elderly relatives but their parents.

The revised official guidelines came after consultation with experts at universities in Zurich, Bern and Geneva, Swiss broadcaster SRF reported.

The new advice applies to young children who show no signs of illness while older children must still avoid contact with grandparents.

Dr Koch advised only “brief contact with grandchildren”, not family get-togethers, babysitting, or spending time with children outside the home.

However, not all experts concur with the Swiss government’s findings.

Sounding a note of caution, Germany’s chief virologist Christian Drosten told Austrian broadcaster ORF that there was insufficient data to say conclusively that young children could not transmit the virus.

He said the question of whether children contracted the virus, and if so how they might pass it on, was answered differently in different studies.

Advice in the UK remains that children should not have contact with grandparents.

At a daily news briefing this week, Health Secretary Matt Hancock was asked by a member of the public when she would be allowed to hug her grandchildren again.

Mr Hancock said he “fully accepts” the importance of getting together with family but that it was important that “people who are vulnerable continue to be protected”.

The UK’s chief medical adviser, Chris Whitty, has warned that for some vulnerable groups close contact with family may continue to be a risk for some time.