Geir Pedersen says talks to take place ‘as soon as pandemic allows’, adds virtual meeting will not be possible. 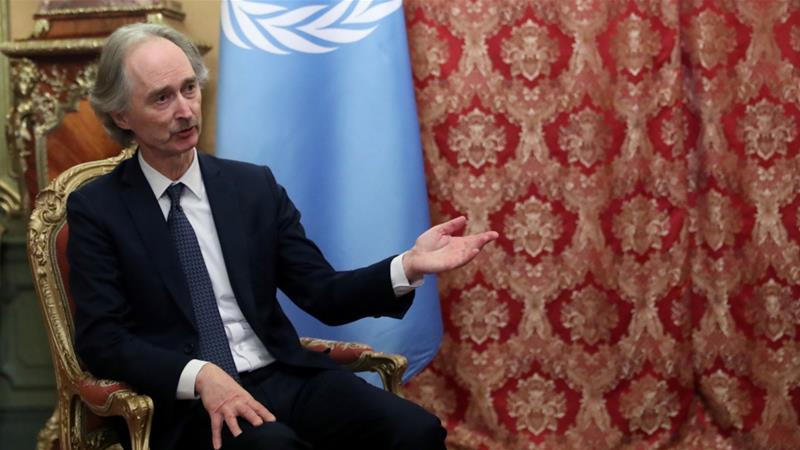 Representatives of opposing sides in Syria’s war have agreed to reconvene in Geneva for stalled negotiations on the constitution, according to Geir Pedersen, the United Nations special envoy to the country.

A lull in fighting could provide an opportunity to start healing “deep, deep mistrust” between them, Pedersen said on Tuesday.

Pedersen did not give a date and said a virtual meeting of the constitutional committee would not be possible.

In the same briefing, Pedersen repeated a call for key international actors, including the United States and Russia, to hold talks about a push for peace.

Moscow has been the key backer of Syrian President Bashar al-Assad while Washington opposes him.

He said there have been too many fleeting opportunities to move from conflict to a political path that were lost, and “those missed moments were followed by renewed violence and a hardening of positions among regional and international actors”.

“We must not repeat this pattern,” Pedersen added.

Over the nine years of the Syrian conflict, there have been 12 rounds of peace talks in Kazakhstan and eight rounds of Geneva conferences.

Pedersen said there is anxiety that while violence has somewhat abated at the moment it could escalate at any time, and deep disappointment that the political process has not delivered tangible improvements for the Syrian people.

The long-standing divisions between Washington and Moscow over Syria were evident in their speeches to the council that followed, which gave no indication of a desire for talks.

US Ambassador Kelly Craft said fully implementing a 2015 plan, starting with an immediate nationwide ceasefire, is “what will move Syria towards a future of peace” – and that is what the UNSC must pursue.

She urged the council to ensure that the Syrian government reverse “its destructive pattern of behaviour against its own people” and agree to a ceasefire instead of pursuing a military solution to the conflict.

Russia’s UN Ambassador Vassily Nebenzia called for the lifting of unilateral “suffocating sanctions” imposed by the US and others which he said were preventing Syria from buying medical items to tackle coronavirus pandemic and he criticised the presence of US forces in northeast Syria.