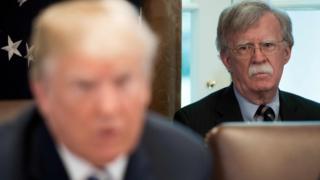 The presidency of Donald Trump has already generated a long reading list, but the latest offering from former National Security Adviser John Bolton has attracted more attention than most, given the author’s high-ranking status and the nature of his claims.

His work – The Room Where It Happened – portrays a president ignorant of basic geopolitical facts and whose decisions were frequently driven by a desire for re-election.

Even Trump critics have asked why Mr Bolton did not speak up during impeachment hearings, while the president himself has called his former top adviser on security matters “incompetent” and a “boring old fool”.

The White House is tying to stop the book’s release, but US media have obtained advance copies and have started publishing details from it. Here are some of the most eye-catching allegations.

In the book, Mr Bolton describes a meeting between President Trump and his Chinese counterpart Xi Jinping at a G20 meeting in Japan last year.

The US president “stunningly, turned the conversation to the coming US presidential election [in 2020], alluding to China’s economic capability and pleading with Xi to ensure he’d win,” Mr Bolton writes.

“He stressed the importance of farmers and increased Chinese purchases of soybeans and wheat in the electoral outcome.”

Agriculture is one of the major industries in the Midwest American states that helped propel Mr Trump to victory in the 2016 election.

2. … and said building internment camps was the ‘right thing to do’

China’s treatment of the Uighurs and other ethic minorities has brought international condemnation, with about a million people thought to have been detained in camps in the Xinjiang region.

On Wednesday President Trump authorised sanctions against Chinese officials involved in the mass incarceration, prompting an angry response from China.

But in Mr Bolton’s book, when Mr Xi defended building the camps the US president suggested he approved of China’s actions.

“According to our interpreter,” Mr Bolton wrote, “Trump said that Xi should go ahead with building the camps, which Trump thought was exactly the right thing to do.”

The Chinese leader is not the only authoritarian Mr Bolton accuses the president of pandering to.

Mr Trump was willing to intervene in criminal investigations “to, in effect, give personal favours to dictators he liked,” Mr Bolton wrote.

According to the book Mr Trump offered help to Turkish President Recep Tayyip Erdogan in 2018 in a US investigation into a Turkish company over potential violations of Iranian sanctions.

The US president is said to have agreed to “take care of things” and that the prosecutors involved were “Obama people”.

4. The Democrats should have gone further with impeachment efforts

In the book, Mr Bolton backs up Democrats’ allegations that President Trump wanted to withhold military aid to Ukraine to pressure it into investigating his rival Joe Biden, a claim which sparked their impeachment efforts against him.

He criticises the Democrats in the book, saying they committed “impeachment malpractice” by just focusing on Ukraine. He argues that if they had broadened the investigation more Americans would have been persuaded that President Trump had committed the “high crimes and misdemeanours” necessary to be removed from office.

Mr Bolton does not say if the new allegations he makes are impeachable offenses.

He declined to testify in the process when it was in the House of Representatives late last year, then was blocked from appearing in the Senate by Republicans.

5. Trump suggested he wanted to serve more than two terms

More now on President Trump’s conversations with Xi Jinping. Mr Bolton says Mr Trump told China’s leader that Americans were keen for him to make the constitutional changes needed for him to serve more than two terms.

“One highlight came when Xi said he wanted to work with Trump for six more years, and Trump replied that people were saying that the two-term constitutional limit on presidents should be repealed for him,” he wrote in an extract published by the Wall Street Journal.

“Xi said the US had too many elections, because he didn’t want to switch away from Trump, who nodded approvingly.”

6. Trump didn’t know the UK was a nuclear power…

Britain was the third country after the US and the Soviet Union to test an atomic device, in 1952. But that the UK is part of the small club of nuclear-armed states appears to have been news to President Trump.

One extract told of a 2018 meeting with then UK Prime Minister Theresa May in which an official referred to Britain as a nuclear power.

Mr Trump is said to have replied: “Oh, are you a nuclear power?”

The remark, Mr Bolton said, “was not intended as a joke”.

7. … or if Finland was part of Russia

Mr Bolton says there were other gaps in President Trump’s knowledge.

Before a meeting with Russian President Vladimir Putin in the Finnish capital Helsinki, he is said to have asked if Finland was “kind of a satellite of Russia”.

According to Mr Bolton, intelligence briefings were not “terribly useful” since during most of them “he spoke at greater length than the briefers, often on matters completely unrelated to the subjects at hand”.

8. He was very close to actually quitting Nato

President Trump has been a persistent critic of the Nato military bloc, calling on other members to boost their spending.

Despite this the US remains a member, but Mr Bolton says that at a 2018 Nato summit Mr Trump had decided to quit.

“We will walk out, and not defend those who have not [paid],” the president said, according to Mr Bolton.

9. Invading Venezuela would be ‘cool’

One of the major foreign policy headaches for the Trump administration has been Venezuela, with the US a staunch opponent of its President Nicolás Maduro.

In discussions on the matter, President Trump said it would be “cool” to invade Venezuela, and that the South American nation was “really part of the United States”.

Mr Putin’s objective was to defend his ally President Maduro, Mr Bolton writes. In 2018, Mr Trump labelled the leftist Mr Maduro a dictator and imposed sanctions, but he clung to power.

In an interview with ABC News to be broadcast in full this Sunday, Mr Bolton says of Mr Trump: “I think Putin thinks he can play him like a fiddle.”

10. Even allies ridiculed him

He describes a dysfunctional White House, one in which meetings resembled “food fights” rather than considered efforts at policy-making.

When he arrived at the White House, the then chief of staff John Kelly warned him, “this is a bad place to work, as you will find out”.

Even Secretary of State Mike Pompeo, considered a loyalist, is said to have written a note describing the president as “full of shit”.