Thailand’s claim to have seized almost $1bn in ketamine was a “misunderstanding”, the country’s justice minister has said.

“This was a misunderstanding that our agency must accept,” he told reporters. “This wasn’t a mistake. It’s new knowledge.” 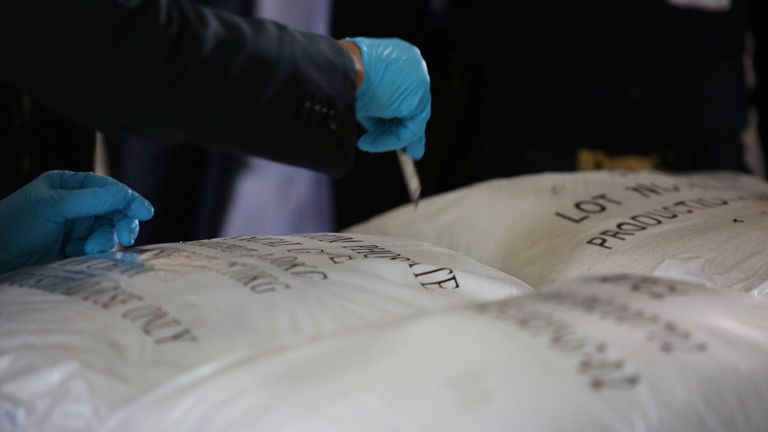 When officials seized the substance earlier this month, they had declared it to be Thailand‘s largest ketamine bust.

Mr Thepsuthin said tests that turn purple in the presence of ketamine hydrochloride react the same way to trisodium phosphate – something officials had not been aware of.

Trisodium phosphate is a white powdered substance that can also be used in stain remover and as a food additive.

The testing is continuing, with at least 66 of the 475 bags checked so far.

“The United Nations Office on Drugs and Crime even said that this type of mistake happened in other countries as well, but this was the first time in Thailand,” Mr Thepsuthin said, according to the Bangkok Post.

Ketamine is used as an anaesthetic and anti-depressant, but when used recreationally it can induce trance-like sensations and sometimes hallucinations.

Thailand’s Office of the Narcotics Control Board had previously said the sacks found in a warehouse were connected to a multilateral drug network.

The kingdom is a major transit route for the illegal drug trade, particularly in methamphetamines and heroin from the so-called “Golden Triangle” of northern Thailand, Laos, and Myanmar.

According to The Nation, Mr Thepsuthin had said: “We have been tracking this network for two months, and believe that the drugs were smuggled in via the Golden Triangle in Chiang Rai province and were kept in the warehouse to be shipped to Taiwan and other countries.”

Lawyer and transparency activist Atchariya Ruengrattanapong accused him of giving false information and asked the country’s anti-corruption agency to look into the case.

Mr Thepsuthin reportedly said authorities would find out where the substance came from, and for what purpose.

The man who rented the warehouse to store the bags had not been arrested because he fled before the raid, according to the Bangkok Post.