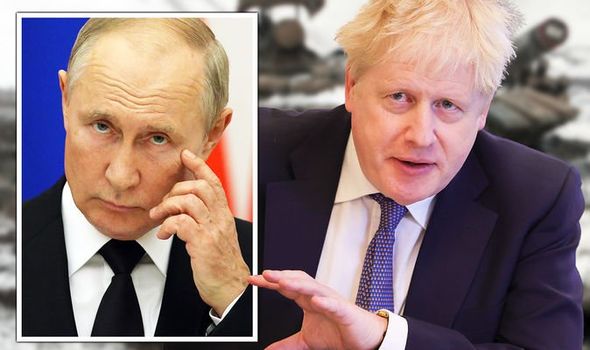 But Shailesh Vara warned the endless talk of Partygate – and the associated cloud of uncertainty hanging over Prime Minister Boris Johnson – was proving an unhelpful distraction at a time when his Government’s attention needed to be focused on Ukraine.

Amid growing speculation that Mr Putin is poised to order an invasion of Russia, Mr Vara, speaking in the Commons on Tuesday, reminded Mr Johnson of the importance of NATO standing firm.

Yesterday, the MP for North West Cambridgeshire said he was deeply concerned at what he concerned was Putin’s campaign of “disinformation” which he was using to justify military action, as well as his apparent misunderstanding of the purpose of NATO itself.

He explained: “We saw this with Georgia in 2008 and we saw it again with Crimea in 2014 when huge amount of false narrative, spreading of rumours and misinformation.

“I think this is standard practice by Putin with a view to getting his own people on side.

“He’s not particularly concerned about whether things are correct or not, as long as his people think that he’s accurate, he’s in the right and he will do whatever is necessary to achieve that objective.”

As for the UK’s role, Mr Vara said: “This is a major global issue. Had the UK still been a part of the EU we would not have been able to be as decisive in terms of what we propose to do with our allies in NATO.

“Brexit is a good example of not being bogged down with EU bureaucracy, the need for agreement with all the other EU nations.

Mr Johnson is mired in the fallout from the investigation into various lockdown-busting parties connected with Downing Street, two of which he attended, and Westminster is awaiting the publication a potentially damning report by civil servant Sue Gray.

While Mr Vara conceded it was important to get to the bottom of what happened, and also acknowledged it as an “avoidable crisis”, he also emphasised the importance of getting things in perspective.

He explained: “We are beginning to get letters from members of the public who are saying, ‘Can you please stop this conversation in Westminster, and try and address the real world?’ and then outlining their concerns.

“For example, I had a pensioner writing to me worried about the increase in energy prices saying they were struggling to deal with them and wanting my advice and help.

“People need to know these things, and the public is rightly concerned about cost of living, energy prices – and of course, about 100,000 soldiers on the Ukrainian-Russian border.”