With the Real Mother Shuckers, Ben Harney Jr. wants to return oysters to ubiquity in New York City and honor the legacy of Black oystermen.

Though he didn’t grow up eating oysters, Ben Harney Jr. has become a modern representative of the legacy of Black oystermen.Credit…Douglas Segars for The New York Times

On a recent afternoon in Brooklyn, Ben Harney Jr. stood behind his dark blue cart in front of the Bushwick location of BK Lobster, gingerly prying open Fanny Bay, bluepoint and Prince Edward Island oysters with his shucking knife and presenting them to customers on a bed of ice. Occasionally, a curious passer-by would ask him what he was doing, to which he replied, “Selling oysters,” raising his voice loud enough to be heard over the rumble of the J train overhead and the hip-hop music playing from a portable speaker.

Mr. Harney, a 37-year-old Crown Heights native known as Moody, is the owner of the Real Mother Shuckers, a small business he founded in 2019 to provide a more approachable oyster experience.

“People can be a little leery of a guy selling oysters on the street,” Mr. Harney said. “So I’m serving them in a comfortable way so that some can have the experience and judge for themselves.”

At $3 to $4 per oyster, customers can get their shellfish either “naked” or “dressed,” which includes three options: a classic mignonette; “sushi”-style, with thin strips of seaweed dotted with cucumber and ponzu; or “candy apple,” with green apple, tart yuzu and hot sauce. 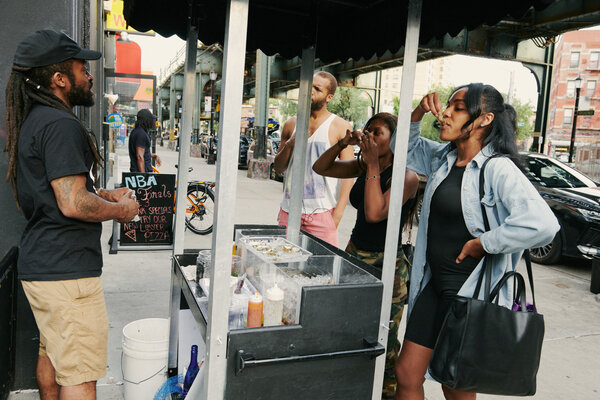 Although they are now associated with the city’s luxurious raw bars and seafood towers, oysters were once ubiquitous across New York, served raw, smoked, pickled, in creamy stews, fried whole or mixed with bread and stuffed as oyster dressing. In the 1800s the lower Hudson River estuary was home to some 350 square miles of oyster beds, and street stalls where oyster snacks could be purchased were a common sight.

“Before the 20th century, when people thought of New York, they thought of oysters,” wrote the journalist Mark Kurlansky in his 2007 book, “The Big Oyster: History on the Half Shell.” “New Yorkers ate them constantly. They also sold them by the millions.”

Mr. Harney knew nothing about this history while growing up in Brooklyn, and it wasn’t until he lived in Louisiana that he encountered raw oysters. The meaty, plump round flavors of Gulf oysters didn’t appeal to him at first, but when he returned to New York in 2016, he started working as a shucker at Maison Premiere, a stylish oyster and cocktail bar in Williamsburg, where he familiarized himself with more than two dozen varieties of bivalves. “It made me respect the oyster for the first time,” Mr. Harney said.

The process of shucking, smelling and serving hundreds of oysters a night sent Mr. Harney down a rabbit hole. He read “The Big Oyster” and began following the work of organizations like the Billion Oyster Project, a nonprofit dedicated to restoring oyster reefs in New York Harbor after overharvesting and pollution led to the decline of the oyster population in the 1900s.

He also learned that many of the city’s oystermen, seamen and whalers were African American. “Seafaring was central to the freedom struggle and central to economic survival,” said Jeffrey Bolster, a professor of history emeritus at the University of New Hampshire and the author of “Black Jacks: African American Seamen in the Age of Sail.”

Oystering and seafaring offered Black men status in the 1800s, Mr. Bolster added. One of the most prominent oystermen of the time was Thomas Downing, an African American businessman and abolitionist who opened Thomas Downing Oyster House in 1825 at 5 Broad Street in Lower Manhattan. His oyster saloon was one of the most popular restaurants in the city and also served as a stop along the Underground Railroad.

When Mr. Harney opened his pop-up outside of his favorite bar in Brooklyn, he began telling anyone who stopped by about Mr. Downing and the history of oysters in New York. He especially wanted Black people to know these stories. “We’re so far removed from the history of boats and oysters that when we see an oyster we go, ‘Ew, that’s white people [expletive],’” he said. “But that’s not true, and we’ve been so instrumental in this story.”

“Ben Moody is a very important person because he’s the Black oysterman,” said Stephen Satterfield, a TV host and a co-founder of Whetstone Media, who featured Mr. Harney on the first season of the Netflix show “High on the Hog.” “He’s a part of the Black oysterman tradition in New York and a great ambassador of that legacy in New York. He’s a showman and a teacher.”

Earlier this summer, Mr. Harney built a fully collapsible cart so that he can cater private events in addition to his weekly rotation of appearances at BK Lobster, Sahadi’s in Industry City and a kiosk at Governors Island that will open on July 4.

Other plans for his company include franchising, creating oyster programs at restaurants and operating a brick-and-mortar space where he can expose students to oysters and shucking.

Ultimately, Mr. Harney wants oysters to become a common food — for everyone — again. “New York was the oyster capital of the world,” he said. “And we’re eating hot dogs?”