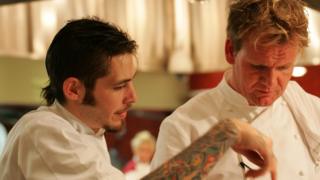 The shy but talented cook had made it through to the final on the first US series of Gordon Ramsay’s show Hell’s Kitchen. His last challenge was to run his own kitchen in full view of TV cameras and one of the world’s most fearsome chefs.

It was a test Michael, then aged 27, passed.

Footage of the tall, heavily tattooed young chef embracing Ramsay after winning the show was beamed into millions of households across the world in 2005.

“For the first time I feel like I’m in control of my own future,” Michael said on the show. “I’ve proven myself to myself and that’s important.”

Michael initially thought he had won $250,000 prize money to open up his own restaurant. “As Michael was celebrating the win of a restaurant,” Ramsay’s voiceover said, “I realised that an individual of Michael’s talent – I didn’t want him to get away.”

Ramsay made Michael an offer to work alongside him in London. After some nervous deliberation, a shell-shocked Michael agreed. The room erupted in cheers.

But Michael would later change his mind. “It was the hardest decision I’ve ever had to make. I regret it all the time,” he tells the BBC.

“I was in Hell’s Kitchen with a drug problem. I was deathly afraid of going to London with this giant addiction.”

Growing up in rural Colorado, Michael was interested in cooking from an early age, often helping his father in the kitchen. He says it was a way to express himself outside the classroom, where he struggled due to his attention deficit disorder.

He dropped out of high school and went to work in a kitchen.

In 1999, Michael spent two years training to be a chef in London. It was during this period he became fully aware of a chef with a fearsome temper called Gordon Ramsay, who was building a name as one of the world’s best chefs.

“He had this reputation out there of being this badass chef that no one wants to mess with,” Michael recalls.

“I tried for like a year to work with him for free but no-one could get in there, it was really exclusive.”

When he heard about auditions for Hell’s Kitchen through his in-laws, who worked in the industry, Michael decided this would be his best shot at getting close to Ramsay. He applied and went through a rigorous process of interviews and tests. Eventually, he was told he had made the final 12.

Michael saw the show as a chance to show off his talent and draw on Ramsay’s expertise. But as soon as the cameras started rolling, Michael realised it was going to be tougher than he thought.

He learned that Hell’s Kitchen would be open to the public and one contestant would be eliminated after each service. Cameras would be rolling 24/7, even when they slept.

“I went into this thinking that I’m going to learn all this great chef stuff from Gordon Ramsay and then I ended up realising I needed to do everything I could to stay on this show to win,” he says.

“I didn’t want to be on national TV and lose.”

But Michael had little to worry about.

Despite Ramsay telling him he had a “palate like a cow’s backside” in the first episode, Michael soon emerged as a frontrunner.

While contestants regularly received the famous wrath of Ramsay’s tongue, Michael generally dodged verbal attacks. He was winning tasks and carrying his team, regularly stepping in to assist those struggling.

Despite Ramsay’s fearsome persona in the kitchen, Michael says he was the polar opposite outside of it. And even when Ramsay would let rip, he recognised it was for good reason.

“I didn’t know if he’d be able to turn off his chef persona once he got out of his chef clothes, but as soon as he changed out he wasn’t chef Ramsay, he was this happy, boisterous kid,” Michael says.

“When he leaves the restaurant I think that persona is still embedded in the kitchen, like a poltergeist. When he leaves people are still pushing themselves to be as perfect as it can be, every single dish,” he says.

After seeing off every other contestant, Michael faced off against Ralph Pagano in the final. Both chefs had to create their own menu and decor, with former contestants returning to help them run their kitchens.

Although Ramsay voiced reservations over whether Michael was assertive enough to run his own kitchen, his cooking ability and high standards shone through.

After service finished, Michael and Ralph were made to stand in front of two doors. The winning door was unlocked, while the other was locked.

Michael stepped forward, turned the handle and walked into a room full of cheers.

“My mind went blank for a little bit,” he recalls.

“What’s going to happen now with the rest of my life? I was flooded with possibilities.”

But Ramsay’s offer of working alongside him in London immediately made Michael face up to a problem that had been brewing for some time.

A couple of years before he appeared on Hell’s Kitchen, Michael had back surgery for scoliosis and was prescribed powerful opioid painkillers for his recovery. He was soon hooked.

During filming he handed his prescribed pills to producers while also smuggling his own into the house. Even then, he still needed to request more from his doctor.

“It was already taking half my mental energy just to keep my addiction in check just so I could work and live a normal life,” he says.

Michael was flown out to London for five days and got a taste of what could lie ahead for him. But in the end, fears of not having access to his drugs eventually made him turn down the offer.

“Gordon wanted me to move out there. He probably got a little miffed that I didn’t go out to London,” he says.

“He’s offering this young chef to move to London to mentor, to show how this is all done, and I had to turn him down.”

Ramsay’s representatives did not respond to a request for comment.

Despite turning down the chance to work with one of the world’s best chefs, Michael still had a lot going for him in the US.

He was preparing to open his own restaurant in Los Angeles. He had money in the bank and was expecting his first child with his wife Lola.

“Within a few weeks of opening the restaurant my daughter passed away,” Michael says.

“We had some complications at birth where she lost her breath for seven or eight minutes. She lost too much oxygen to her brain and died.”

Michael could no longer prevent his addiction taking hold of his life.

“It put me in a tail-spin for the next couple years,” he says. “It was all starting to crumble around me.”

Michael managed to carry on at the restaurant for around six weeks after his daughter passed away before walking away.

His relationship soon broke down and he started living out of his truck. Michael would still find work in kitchens, mainly so he could fund his spiralling drug habit.

Before long, Michael was living beneath an underpass near Hollywood Boulevard.

“I was a complete loner,” he says.

“I would listen to my radio at night and go to sleep. It was almost like there was nothing really happening in my life. It was just like existing,” he adds.

“I was sticking a needle in my arm, I didn’t want anyone to see that.”

Although Michael was by then on the streets and in the full-blown thralls of addiction, he would still find ways to cook. At one point, he was leading classes at the high-end Sur La Table store by day, then retiring to the underpass to take drugs and sleep at night.

“I was living this dual life where you had this persona of ‘Chef Michael from Hell’s Kitchen is going to teach you guys to cut onions today’ but then at the same time I had this raging drug addiction that I’m trying to hide from the world,” he says.

With all his money going on drugs, Michael was forced to visit homeless shelters for meals, but would usually end up rustling up dishes in the kitchen for the rest of the shelter.

After years of Michael getting highly addictive painkillers on prescription, his doctor in New Mexico, where he had relocated, eventually refused to give him any more.

With the withdrawals kicking in, he started to panic. He tried to check himself into rehab but was told his withdrawals were too severe so he would need to go to hospital.

By this point, Michael knew he had to get drugs inside his system. It was then he remembered that his pharmacy was the only one in the state that keeps all their medication on the shelves at night. He broke in with an axe, stole the drugs and drove out to the middle of the desert.

Michael had intended to use his time in the desert as an opportunity to slowly wean himself off the drugs – but things went from bad to worse.

“What ended up happening was I went almost 30 days without eating any food. I had almost no water,” he says.

After about a month, Michael started hallucinating, believing that ghosts were trapped inside him. He then attempted to take his life but was found by a passing driver as he drifted in and out of consciousness while crawling by the side of the road.

“I didn’t want to die and I needed to get somewhere where someone could see me and help me,” he says.

Michael woke up in hospital 48 hours later and decided it was time to get clean. After 10 days recovering in hospital, he entered rehab in June 2012.

Unsurprisingly, cooking played a part in his recovery.

“All my days were spent cooking three meals a day for seven or eight people dealing with drug addiction. It was a really fulfilling time in my life,” he says.

It was in rehab that Michael met his wife Sharlene.

“I had a smile on my face for the first two or three years. I couldn’t believe how good life is,” he says.

When Michael left rehab, he handed himself into the police for the pharmacy raid. He ended up serving close to a month in jail, where he was allowed to help out in the kitchen.

“I felt I had to answer for my crime and make it right,” he says.

Once out, he knew it was time to get back to what he loved.

But he felt he needed to earn the right to call himself a chef again. He started by taking some shifts at a local breakfast cafe.

“I spent the next three to four years just getting back to the ability where I could call myself a chef,” he says. “I started the whole process again.”

In recent years Michael has worked as the head chef at numerous restaurants and has also been consulting with other chefs to help with their menus.

He dreams of one day owning his own food van. “To me, as a chef, it seems like the ultimate expression of our art – to be able to go anywhere and cook anything,” he says.

Michael has also visited the Philippines where he has some pop-up events lined up for later this year, that he hopes will not be derailed by the coronavirus pandemic. He is looking into starting a restaurant there.

He has reached out to Hell’s Kitchen a few times, but never got a response.

“I think that because the way my life went right after Hell’s Kitchen, I think they’re more interested in having success stories,” he says.

But after the journey he has been on, Michael is happy to be alive and cooking again.