FORT PECK INDIAN RESERVATION, Mont. — On a frigid November morning inside a tractor barn in northeast Montana, 10 members of the Sioux and Assiniboine tribes joined in song to bless a thirty-aught-six hunting rifle, and to lift up the spirit of a buffalo they were preparing to kill. One man played a painted hand drum. Others passed around burning sage.

The hunt that followed took place on Turtle Mound Buffalo Ranch, 27,000 acres of rolling pasture on the Fort Peck Indian Reservation. Every stage of the hunt was marked by a ceremony to give thanks for a buffalo that descends from animals killed to near-extinction by white settlers in the late 19th century.

The mass killing was part of a government-approved effort to seize land from Native Americans who depended on the animal to survive. The brutality of settlers’ expansion into the Great Plains and American West has been drastically underplayed in popular myths about the founding and growth of the United States.

Arguably the best-known of those myths is the story of the first Thanksgiving, a holiday Robert Magnan, who led the buffalo hunt at Fort Peck, does not observe. “Thanksgiving is kind of like Columbus Day for Native people,” he said. “Why would we celebrate people who tried to destroy us?” 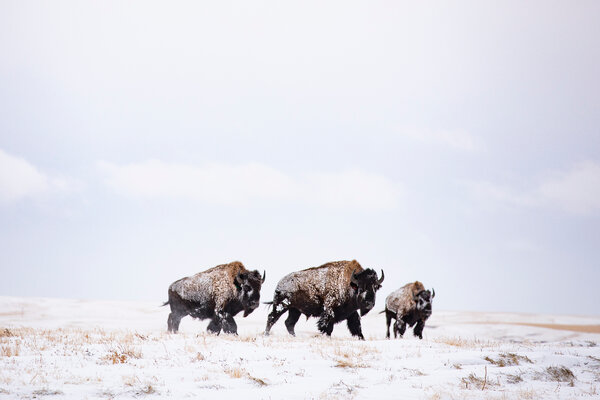 It is now widely accepted that the story of a friendship-sealing repast between white colonists and Native Americans is inaccurate. Articles debunking the tale have become as reliable an annual media ritual as recipes for cornbread stuffing.

But this year should be different, say Native American leaders, scholars and teachers.

The holiday arrives in the midst of a national reckoning over race, and a global pandemic that has landed with particular force on marginalized communities of color. The crises have fueled an intense re-examination of the roots of persistent inequities in American life.

This Thanksgiving also comes on the heels of an election in which 110 American Indian and Alaska Native candidates ran for office, according to the National Congress of American Indians, and on the 400th anniversary of the Mayflower voyage.

Winona LaDuke, the Native American activist and writer who ran for vice president in 1996 and 2000 as Ralph Nader’s running mate, believes that the country is primed to re-envision Thanksgiving as an occasion to come to terms with the cruelty Native Americans have experienced throughout history.

“I’ve seen a growing awareness, a wake-up, to the systemic oppression of people of color,” said Ms. LaDuke, an enrolled member of the White Earth Ojibwe Nation. “There is a movement toward justice for Native people. People want to listen.”

Thanksgiving, of course, is a time for listening, a welcome opportunity for prayer, reflection and looking back, and many Indigenous people celebrate it in their own way. But the problem with its origin story, Ms. LaDuke and others say, goes beyond misrepresentations about what was served on Cape Cod in 1621. (There is no evidence that turkey was on the menu, and pie couldn’t have been, because there was no flour or butter available for crust.)

Linda Coombs is a Wampanoag historian and a member of the Wampanoag Tribe of Gay Head (Aquinnah), on Martha’s Vineyard, Mass. Wampanoag people attended the harvest ceremony that later became known as the first Thanksgiving.

“There was an event that happened in 1621,” Ms. Coombs said. “But the whole story about what occurred on that first Thanksgiving was a myth created to make white people feel comfortable.”

The caricature of friendly Indians handing over food, knowledge and land to kindhearted Pilgrims was reinforced for generations by school curriculums, holiday pageants and children’s books. These stories were among the few appearances made by Native Americans in popular historical narratives, effectively erasing history-altering crimes, like the killing of tens of millions of buffalo, from the country’s consciousness. That massacre led to the mass starvation of Indigenous people.

“Erasure isn’t taking down a conquistador statue,” said Ms. LaDuke, 61. “Erasure is when you don’t even know the name of the people who own the land where you live.”

Work to reverse this historical amnesia has spanned decades. The National Day of Mourning dates back to 1970, established on Thanksgiving by activists in New England to recognize the suffering of Native Americans. Fourteen states and the District of Columbia now celebrate Indigenous Peoples’ Day instead of Columbus Day, recasting a holiday that honored an explorer who presided over the enslaving and killing of Indigenous people.

Dana Thompson and her partner, Sean Sherman, an award-winning chef, are co-owners of the Sioux Chef, an organization in the Twin Cities devoted to revitalizing Native American cuisine. In the period between Indigenous People’s Day and Thanksgiving, she said she is “inundated with people who might have some awareness with the pain over the characterizations that comes with this time.”

She urges anyone who asks to focus on “the true Indigenous wisdom that is behind the philosophy of Thanksgiving — it’s about not taking, but about giving back.”

Today, it’s more common than it once was for stories by and about Native Americans to find mainstream audiences. Tommy Orange, a citizen of the Cheyenne and Arapaho Nations of Oklahoma, and David Heska Wanbli Weiden, an enrolled member of the Sicangu Lakota Nation, are two of the most critically acclaimed young novelists working now.

These developments follow years in which Native American history and culture gradually became more widely taught, in schools and elsewhere. Lyz Jaakola, 52, a member of the Fond du Lac Band of Lake Superior Chippewa, recalls the catharsis she felt as a young woman watching the movie “Addams Family Values,” a dark comedy released in 1993.

In one scene, the Wednesday character, cast as Pocahontas in a children’s Thanksgiving play, goes off script to take violent revenge on the Pilgrims. “You have taken the land which is rightfully ours,” she calmly seethes. “Years from now, my people will be forced to live in mobile homes on reservations. Your people will wear cardigans and drink highballs.”

“I was like, ‘Oh my gosh, other people get it, too,’” said Ms. Jaakola, a musician and teacher who was elected this month to the City Council in Cloquet, Minn. “They realize how ridiculous the whole image of Thanksgiving is.”

Christian Taylor-Johnson, 28, is a descendant of the Leech Lake Band of Ojibwe in northern Minnesota, and attended Leech Lake Tribal College. He said the education he received wasn’t available to older relatives, who were forced to assimilate and prohibited from speaking their native language.

“I actually speak more Ojibwe than either of my parents,” Mr. Taylor-Johnson said.

Mr. Taylor-Johnson said his family’s Thanksgiving traditionally features dishes like turkey, wild rice, fry bread and green bean casserole, his personal favorite. In recent years, he has encouraged family members to use the holiday to acknowledge the plight of their ancestors.

“Last year, we called it Takesgiving,” he said.

Cross-generational education also occurs in non-Native American households. Alice Julier, director of the Center for Regional Agriculture, Food and Transformation at Chatham University, in Pittsburgh, has incorporated Native American history in her teaching for nearly 30 years.

She said there’s a term used in academic circles to describe what happens when students like hers bring new knowledge home for the holiday: the Thanksgiving massacre.

“You come home armed with this information about how the world works,” Dr. Julier said, “and then you come back to your professors and say, ‘Well, that didn’t go well.’”

Indigenous studies is growing increasingly popular in academia, particularly among scholars whose work sits, as Dr. Julier’s does, at the intersection of food, race, class and gender.

Hiʻilei Julia Hobart, an assistant professor of anthropology at the University of Texas at Austin, said current events allow students to see more clearly the shared legacies of African-Americans, many of whose enslaved ancestors were forced to work land stolen from Native Americans, whose agricultural know-how was also co-opted.

“I always start with histories of dispossession as a way of contextualizing why food sovereignty has become such an urgent contemporary project,” said Dr. Hobart, 39, a Kanaka Maoli from Hawaii who has a Ph.D. in food studies. “Now we have this understanding about the fragility of our food system that has come in the wake of the pandemic.”

She added that frontline food workers are disproportionately exposed to the virus, and that “those workers are mostly Black and brown.”

For most of her professional life, LeAnn Littlewolf didn’t give much thought to how past injustices affected the people she serves as an educator and activist. That changed after she attended the Food Sovereignty Summit last year in Green Bay, Wis.

Some items on the Thanksgiving shopping list are obvious, but there are several other ingredients that will prove invaluable to have on hand. See our full guide on How To Cook and Plan Thanksgiving and our list of staples below.