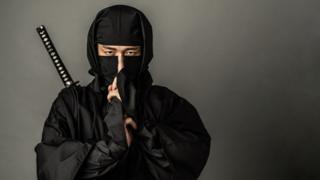 A ninja museum has been raided in Japan, with thieves making off with more than a million yen (£7,100).

The Iga-ryu Ninja Museum in central Japan is dedicated to the history of the famous Iga clan of ninja.

Police were called after an alarm was set off at 01:30 local time on Monday (16:30 GMT on Sunday), the museum said on Thursday.

Officers found the office door had been forced with what is thought to be a crowbar and the 150kg safe was missing.

The safe contained money from admission fees from around 1,100 people, according to the museum.