Health experts warn the crisis could get worse as cases mount and strained health workers fear facing a burnout. 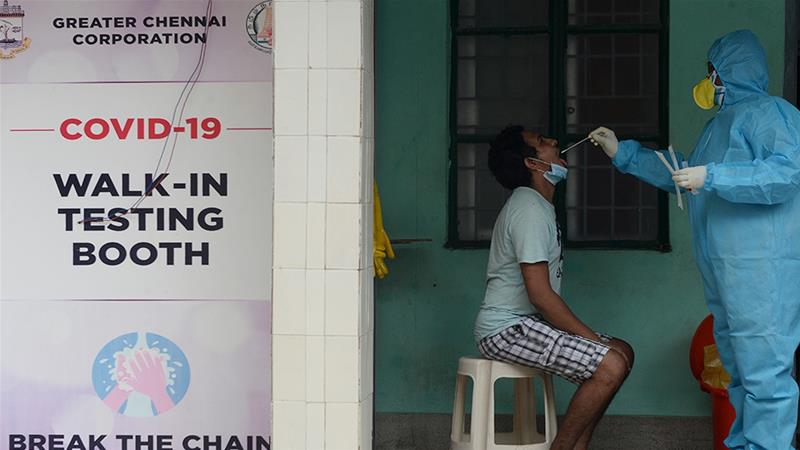 New Delhi, India – A sharp increase in India’s coronavirus cases in recent weeks has raised concerns over the state of its healthcare infrastructure as well as fears of an extended crisis.

Nearly 48,000 new reported cases on Tuesday brought India’s tally close to 1.5 million, making it the world’s third-most affected country behind only the United States and Brazil. The South Asian nation has reported 33,425 deaths so far.

Three states – Delhi, Maharashtra and Tamil Nadu – account for more than half the cases, with the Indian capital having more than 130,000 cases, well ahead of the other two worst-hit cities – Mumbai and Chennai.

Last week, a study conducted by the National Centre for Disease Control and released by the federal health ministry found that approximately 23 percent of Delhi’s population of 20 million have had the novel coronavirus.

The serological survey, which tested samples to find out if people were exposed to the virus in the past, was carried out in the capital between June 27 and July 10.

Despite the sharp increase in cases, the testing rate in the country remains low, with an average of 180 tests a day per million of population.

On Tuesday, India’s top medical research agency, the Indian Council of Medical Research (ICMR), said about 528,082 COVID-19 tests were conducted across the world’s second-most populous nation, which has more than 1.3 billion people.

To ramp up testing capacity, Prime Minister Narendra Modi on Monday launched three facilities in Mumbai, Kolkata and Noida on the outskirts of Delhi. Officials said each facility is capable of testing as many as 10,000 samples a day.

“Friends, the way right decisions were taken at the right time has resulted in our country being in a far controlled situation compared with other countries,” Modi said in a TV address during the launch. 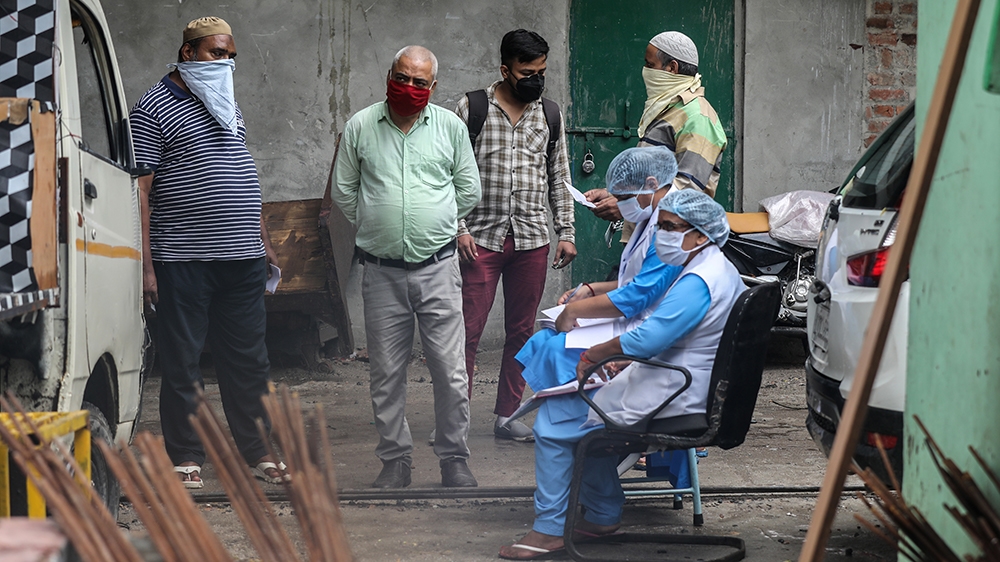 But health experts, still struggling to predict the trajectory of the pandemic despite models and predictions, tend to disagree and fear the crisis in India might get worse.

“It is going to be a tough few months ahead, but there is effectively no brake on the virus, and I don’t expect a decline for quite some time,” Dr Ramanan Laxminarayan, director of the Washington-based Center for Disease Dynamics, Economics and Policy, told Al Jazeera in an email interview.

Days before Modi announced a nationwide lockdown to contain the virus in March, Laxminarayan had warned of a “tsunami of coronavirus cases” in India in an interview with the BBC.

Another study, attributed to ICMR, predicted India will see a peak in November, but the medical body distanced itself from that study, calling it “non-peer-reviewed modelling” which did not reflect its official position.

In yet another study, released on July 8, researchers from the Massachusetts Institute of Technology (MIT) in the US warned that by spring next year, India might record 287,000 cases a day.

But deaths in India due to the virus have been significantly lower than other hotspot nations. Last week, the federal health ministry once again claimed India’s deaths-per-million to be among the lowest in the world.

Deaths in the US and the United Kingdom are respectively 21 and 33 times higher than India.

However, virologist and CEO of the Wellcome Trust, Dr Shahid Jameel, points out that deaths per million people is low across countries in South and Southeast Asia.

While India has about 24.22 deaths per million, Indonesia has 17.69, Pakistan 26.55 and Sri Lanka 0.51. Jameel said it would be “far-fetched to assume” all these countries are under-reporting deaths.

“I think there is a biological reason to it. This is not poor reporting or hiding data,” he told Al Jazeera. “It is just that we are exposed to so many other infectious diseases that our innate immunity, our first line of defence, is possibly better.”

There are also allegations of data fudging and a mismatch in reporting the number of deaths in India.

The Delhi state government was found to be under-reporting deaths compared with what was recorded at funeral homes. The figures from Gujarat, Telangana, Tamil Nadu and Maharashtra states have also been questioned.

Laxminarayan told Al Jazeera the current death rate per million population “don’t mean much since India will take much longer to reach its peak” given the size of its population. 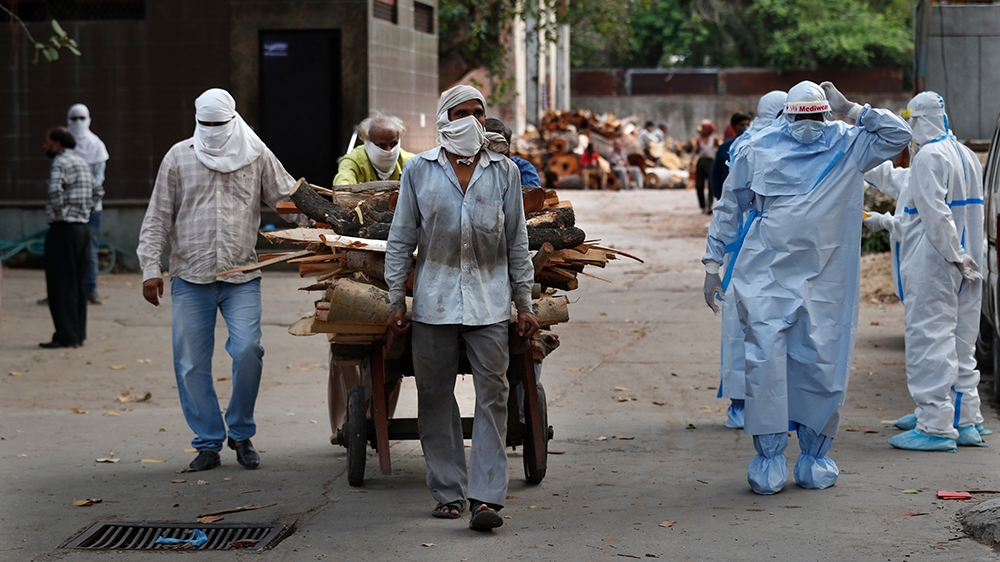 A grim health scenario in India would mean a long haul ahead for its healthcare workers, already stretched under limited resources as coronavirus cases continue to mount.

New Delhi, Mumbai and Chennai, which have the best healthcare facilities in the country, are already facing a shortage of doctors and other health workers.

In recent weeks, nurses and other hospital staff have protested and taken to social media to share their work and living conditions. Complaints mainly include working hours extending at times to more than 12-hour shifts, and sub-standard personal protective equipment (PPE) or none at all made available to them.

New Delhi-based United Nurses Association estimated that until June 30, more than 1,000 nursing staff had been infected in the capital alone.

It also claimed that more than 500 nurses and paramedics in Delhi and Mumbai have quit because of the work conditions.

“If the government doesn’t focus on the protection and health of healthcare workers, it [health system] is going to collapse,” Joldin Francis, general secretary of the association, told Al Jazeera.

“If a nurse is not getting PPEs or proper wages or any leaves, why would they put their lives at risk?”

India spends a little over 1 percent of its gross domestic product (GDP) on public health, one of the lowest percentages in the world, resulting in poorly funded and severely under-staffed state hospitals and a mushrooming of private facilities that millions of the country’s poor cannot afford.

Until last year, India faced a shortage of 600,000 doctors and two million nurses. The country’s doctor-population ratio is appallingly low. While the WHO recommends one doctor to serve 1,000 people, a government doctor in India attends to an average 11,082 people.

In impoverished states such as Jharkhand, Uttar Pradesh and Bihar, there is just one government doctor for nearly 18,000-28,000 people, according to health ministry data released in 2018.

“We know that at some point of time, we will get infected. Doctors I know are only scared for their families, for young children and old parents,” said a doctor working in a Delhi government hospital. He did not want to reveal his name.

He and his wife, who is also a doctor, are both on coronavirus duties and take turns to look after their 10-month-old daughter.

“If Delhi and Mumbai are struggling, I don’t know what is going to happen in Uttar Pradesh or Bihar,” he told Al Jazeera.

“Most of us don’t even get the time to realise that we’re so stressed. I feel in a couple of months, doctors will not be able to perform at the level they were able to do earlier. There will be burnout.”

Despite concerns among healthcare associations, the health ministry has not shared data on coronavirus infection among health workers.

“Healthcare workers are of significant concern. Many are dying and others who are infected face stigma, while all of them face stress and fatigue. We are paying the price for decades of neglect of public health,” Laxminarayan told Al Jazeera.

According to the Indian Medical Association, nearly 100 doctors have died due to COVID-19 in India while at least 1,302 have tested positive for the virus until July 16. 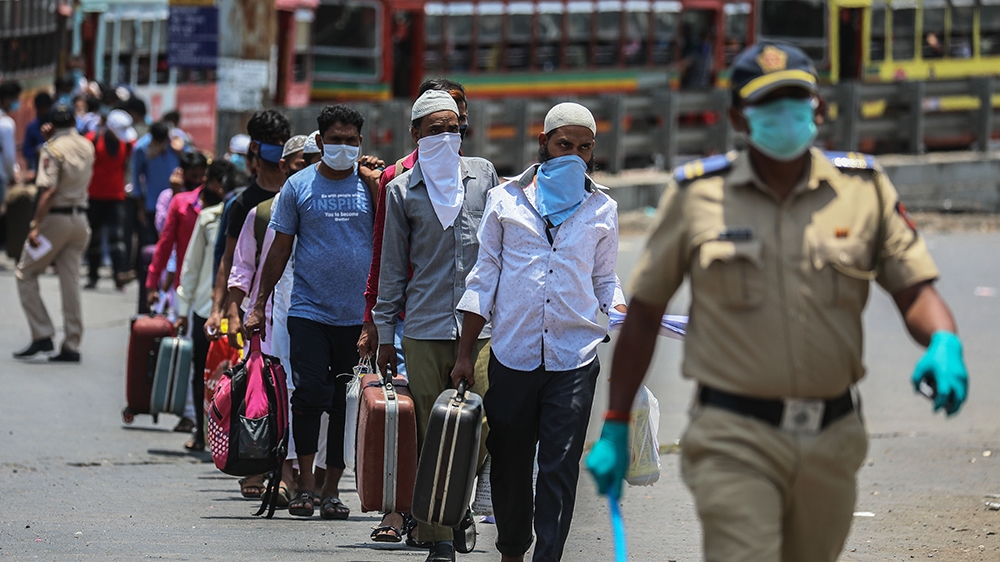 Jameel mentioned Delhi as an example of the curve moving towards flattening, while predominantly rural Uttar Pradesh and Bihar states as examples of the curve going up.

He suggested that a “one size fits all” strategy will not help authorities trying to control the spread of the virus.

Over the past four weeks, 66 districts of Uttar Pradesh saw a more than 100-percent spike in confirmed cases compared with those recorded between March 15 and June 30. In nine districts, the spike ranged between 500 and 3,200 percent.

The northern state, India’s most populous, has now deployed weekend lockdowns to control the spread along with complete lockdowns in the worst-affected districts.

Neighbouring Bihar faces a similar situation. In May, one in four returning migrant workers was found to be COVID-19 positive. The state saw a 60-percent increase in cases in the last two weeks alone. Currently, the state is under a two-week lockdown.

Further south, states such as Andhra Pradesh, Telangana and Karnataka are adding significant numbers to the national tally.

Kerala, the state praised internationally for effectively flattening the curve, is now witnessing a second wave with a surge in daily cases. It is also the only other state, apart from West Bengal, that has admitted to community transmission of the virus in some areas.

Meanwhile, the federal health ministry continues to deny community transmission of the virus and, instead, cites a low fatality rate – 2.25 percent – and high recovery rate – 64.24 percent – as signs of its success in handling the pandemic.