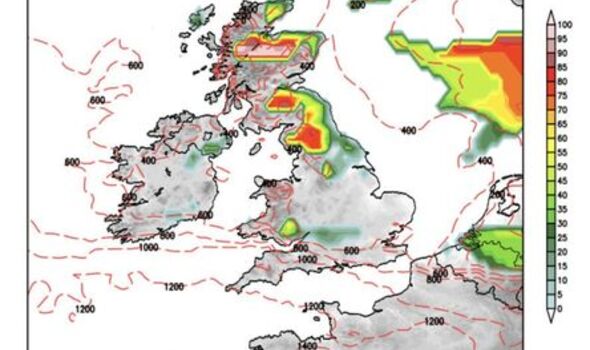 The UK is on alert for sub-zero temperatures and a torrent of snow as the North Pole unleashes its fury on the nation.

Experts are keeping their eyes peels for signs of a Beast from the East weather system over Russia moving towards Britain.

But meanwhile, a change in pressure patterns will put the UK in the firing line for a snowy blast arriving via the Norwegian Trondheim Fjords.

Jim Dale, meteorologist for British Weather Services, said: “The Beast from the East is still slumbering, however, in the meantime we are now pretty sure that from the middle of next week a northerly plunge will sweep over Britain.”

“This could bring snow to high ground, first to the north, and very low overnight temperatures, certainly well-below freezing in parts.”

“So, we are now looking at more of a northerly to north-easterly incursion next week, rather than a Beast from the East just yet, we should be preparing for the Troll from Trondheim.”

The culprit for the early cold snap is high pressure to the east and west of the UK ‘squeezing’ a plume of Polar air southwards.

A separate region of moisture-laden low pressure could trigger heavy snowfall in the run up to Christmas.

Mr Dale, author of Weather Or Not? said: “These situations cause a headache for meteorologists because there are several scenarios that could occur, and it is a case of watching day-to-day.

“At the moment, the immediate threat is from a northerly plunge which we expect to affect the UK around Wednesday or Thursday.”

“But if this low pressure moves in from the west, that could bring heavy snow as it hits cold air over Britain, and then, we could still see the Beast from the East arrive before Christmas.”

“It is, however, about to turn wintry, and people should be prepared.”

The cold snap will be driven by a change in pressure patterns across the Atlantic–the so-called North Atlantic Oscillation.

This will bed in through the next fortnight bringing an increasing risk of prolonged cold weather, according to the Met Office.

Meteorologist Aidan McGivern said: “Every day for the next two weeks computer models are all saying there will be negative North Atlantic Oscillation.

“A much more common situation is a positive or neutral NAO, this is a default weather pattern for the UK.”

“This will start to emerge through the weekend and all the models are saying it will stick with us through the start of December.”

“This means easterlies, and in the winter this always mean cold, so we have high confidence that it is going to turn cold next week.”

As temperatures tumble, bookies are slashing the odds on a winter whiteout with Ladbrokes offering 4-1 on record December snowfall.

Spokesman Alex Apati said: “Brits soon look set to be battered by heavy snowfall, and the latest odds suggest a record-breaking December could be on the cards as a result.”

Some forecasters reckon parts of the UK could see sleet and snowfall as early as the weekend.

Exacta Weather’s James Madden said: “It could be as early as the weekend when wintry showers as sleet and snow in places, particularly, across parts of the north.”

“However, some of these wintry snow showers could fall as far south as the Midlands and Southern England.”

“But we are not yet talking about major snowfall, but some locations could see sleet or snow.”