In one of his final prime-time television events before Election Day, President Trump, who is trailing in national and battleground polls, offered little new to voters who may still be undecided, staking out positions on the coronavirus that are at odds with both the scientific consensus and public opinion.

Simultaneously, on another network, former Vice President Joseph R. Biden Jr. presented a very different vision of the country, promoting a federal response to the pandemic led by health experts.

Mr. Trump arrived at his town-hall event, which took place in Miami and aired on NBC, with a simple pitch: People should vote for him “because we’ve done a great job.” Mr. Biden’s goal for the evening was to both push back on that argument and allow Mr. Trump to keep the focus on himself — something the president appeared happy to do.

With 19 days until Election Day and cases of the virus rising again in much of the country, Mr. Trump said, falsely, “We’re coming around the corner.” 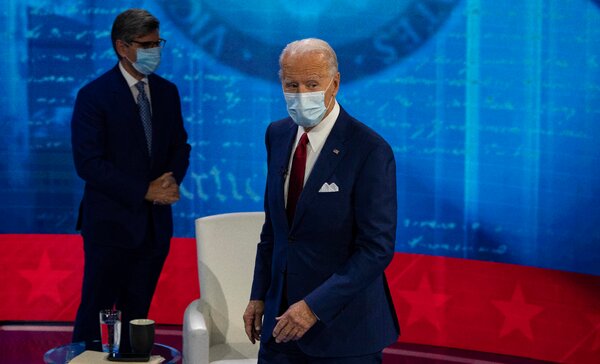 He added, “Vaccines are coming soon and our economy is strong.” In reality, it is not clear when a coronavirus vaccine will be widely available to the public and no medical experts have agreed with him that the country — which recorded at least 65,000 new virus cases on Thursday and has averaged about 700 deaths a day over the past week — is rounding the corner.

Mr. Biden, appearing on ABC from Philadelphia, attacked Mr. Trump for his handling of the pandemic, saying, “He missed enormous opportunities and kept saying things that weren’t true.” Mr. Biden called for a national standard” to combat the outbreak, which has killed over 215,000 people in the United States.