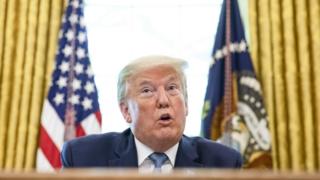 Twitter has refused to delete tweets by US President Donald Trump after a widower publicly implored the company to remove “horrifying lies” about his wife’s death, amplified by Mr Trump.

Twitter did not comment on Timothy Klausutis’ emotional letter, but said it was “deeply sorry” about the pain caused by the president’s statements.

But her death was ruled accidental.

“We are deeply sorry about the pain these statements, and the attention they are drawing, are causing the family,” a Twitter spokesperson said.

The statement added: “We’ve been working to expand existing product features and policies so we can more effectively address things like this going forward, and we hope to have those changes in place shortly.”

The social media giant has a series of rules regulating content on the platform, including policies barring the promotion of violence and “targeted harassment”.

The outlined “enforcement options” include requiring the removal of tweets and the permanent suspension of offending accounts.

How has the White House responded?

At a Rose Garden news conference on healthcare on Tuesday afternoon, Mr Trump was asked if he had seen the widower’s letter.

“Yeah, I have,” he said. “I’m sure that ultimately they want to get to the bottom of it and it’s a very serious situation.”

He added: “It’s a very suspicious thing and I hope somebody gets to the bottom of it. It would be a very good thing.

“As you know there’s no statute of limitations.”

White House spokesperson Kayleigh McEnany said earlier on Tuesday when asked about Mr Klausutis’ appeal: “I don’t know if [Mr Trump] has seen the letter, but I do know that our hearts are with Lori’s family at this time.”

What did the widower say?

Mr Klausutis wrote in a letter to Twitter CEO Jack Dorsey late last week: “Conspiracy theorists, including most recently the President of the United States, continue to spread their bile and misinformation on your platform disparaging the memory of my wife and our marriage.

“My request is simple: Please delete these tweets.”

“I’m asking you to intervene in this instance because the President of the United States has taken something that does not belong to him – the memory of my dead wife – and perverted it for perceived political gain.

How did Lori Klausutis die?

In July 2001, Klausutis was found dead in the Florida office of Mr Scarborough, then a Republican congressman.

Authorities determined the 28-year-old died after losing consciousness from an abnormal heart rhythm, before collapsing and striking her head.

Police found no evidence of foul play. A medical examiner established she had suffered an acute subdural hematoma, or blood clot, and ruled her death an accident.

Mr Scarborough was in Washington, DC at the time of her death.

The MSNBC presenter, his network and Ms Brzezinksi have been highly critical of the president’s handling of the US coronavirus outbreak.