Home » World News » U.S. election: A look at swing states and why they matter

With the U.S. election less than a week away, President Donald Trump and his Democratic challenger former vice president Joe Biden have each zeroed in on key swing states in a last-minute bid to appeal to voters.

Both campaigns have spent the last several weeks campaigning in these battleground states in hopes of persuading the electorate to support their respective parties.

But what are swing states and why do they matter?

Here’s a look at how it works.

In the United States, the electoral college decides the presidency, meaning the candidate who wins the highest number of votes — known as the popular vote — is not always elected.

Instead, it is a state-by-state competition.

Each state is delegated a number of “electoral votes” which is equal to the number of the state’s representatives plus its two senators.

All but two U.S. states, Maine and Nebraska, are “winner-take all,” meaning whichever candidate wins the state is awarded all of its electoral votes.

A candidate must win 270 electoral votes or more to win the presidency. 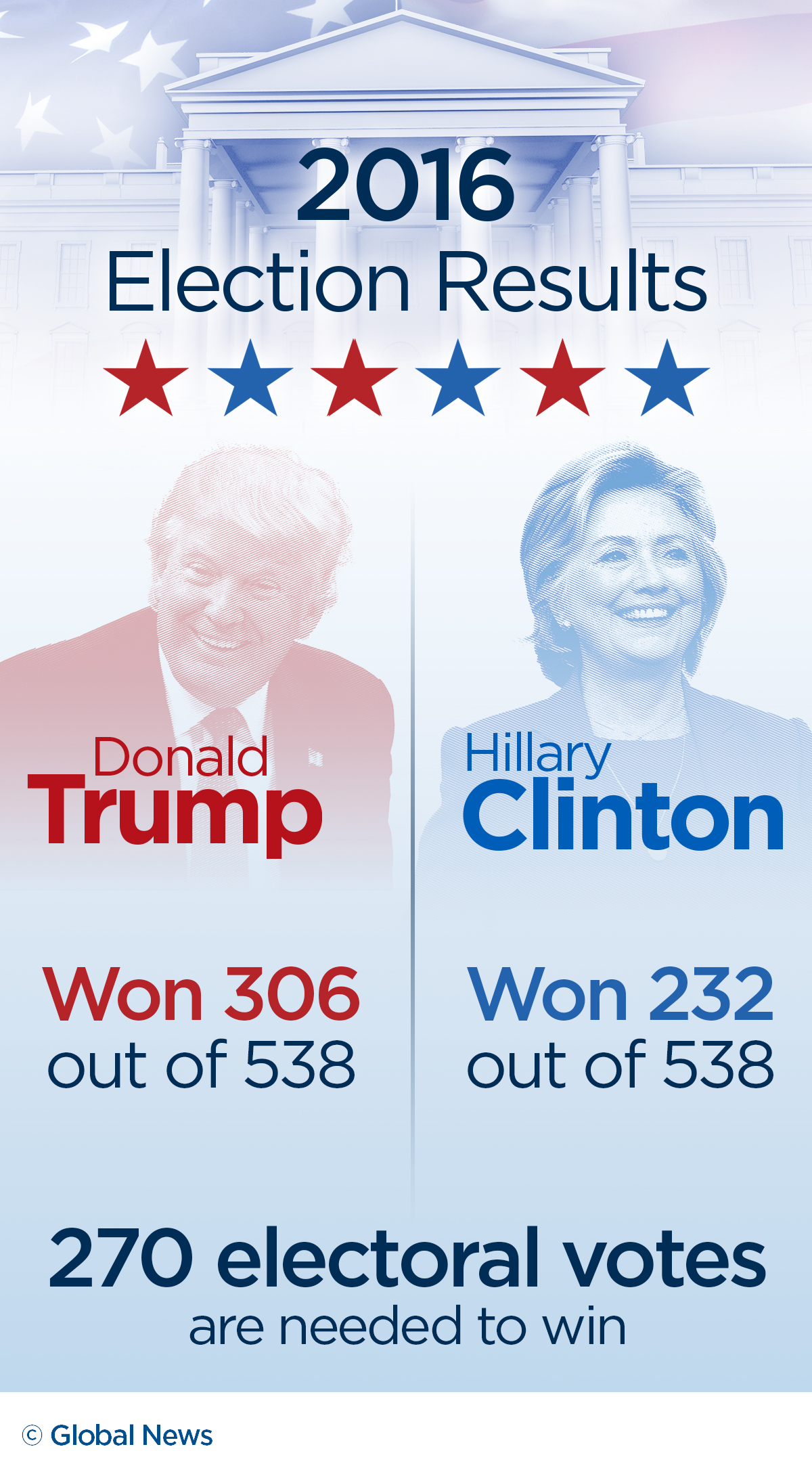 What are swing states?

This year, experts have identified seven key battleground states: North Carolina, Florida, Pennsylvania, Michigan, Arizona, Wisconsin and Ohio — which they say will determine the outcome of the election.

Together, the swing states identified this year account for 119 electoral college votes up for grabs.

Trump won all of these states during the 2016 election.

Swing states are key battleground states where it is not immediately clear who the winner will be.

These states are considered to be “competitive,” meaning over the last several election cycles, the electorate has switched between supporting Republicans and Democrats.

In swing states, neither party’s candidate has a clear lead, meaning both parties see them as an opportunity to pick up electoral votes.

Ryan Hurl, assistant professor of political science at the University of Toronto in Scarborough, explained that before a presidential election or even the presidential primaries begin, it is usually pretty clear how most states are going to vote.

The electoral votes in swing states are crucial for a candidate to obtain the 270 needed to win.

However, swing states can change year-to-year.

But a number of those states, while still important, have not been identified as particularly contentious in this year’s election.

Matthew Lebo, chair of political science at Western University, said this happens because the demographics and voting patterns shift over time.

“Sometimes there can be a particular candidate that puts a state or two in play that otherwise wouldn’t have been in play,” he said. “Or it could be that an election is so lopsided that some states become swing states as part of bigger landslides.”

One thing remains consistent, though: Candidates will spend a large portion of their time, effort and advertising dollars in these key battleground states in an attempt to persuade voters to support them.

According to Lebo, watching how candidates choose to spend their money is a “clear indicator” of which states they believe they have a chance of winning.

“If you just looked at their spending patterns, it would make you think that Donald Trump thinks he’s in real trouble, that he’s spending money in places where he should be solid,” he said.

“The fact that Biden is spending time and money in Texas tells you that they’re trying to win big,” he said.

The results in swing states are normally very close, and are won by razor-thin margins.

During the 2016 election, for example, Trump won Michigan for the Republicans by just over 10,000 votes or 0.3 per cent of ballots cast in the state.

This, and almost every election year Florida, which has 29 electoral votes, is of particular interest.

The candidate who wins Florida has won the presidency in every election since 1964.

Former U.S. president Barack Obama, a Democrat, won Florida during both the 2008 and 2012 elections, however, Trump was able to turn it red in 2016.

Both Trump and Biden have spent considerable time and money campaigning in the state.

Hurl said Florida is one of the states he expects to be the closest this election.

Keep an eye on Ohio

According to Hurl, Ohio is another state to keep a close eye on.

Obama won the midwestern state, which has 18 electoral college votes, in both the 2008 and 2016 elections, but it flipped to the Republicans in 2016.

However, Hurl said there has been a “lot of disillusion” with the Republican party in Ohio.

“I don’t think Trump has been able to build on his support there,” he said.

“I think that it may be hard to know what would have happened absent COVID, But I think that the COVID issues may also be hurting him there,” he continued.

“But really, I think it’s just a case of Trump over promising and underperforming in relationship to the Ohio economy.“

North Carolina and Pennsylvania are two more states of importance.

North Carolina, which has 15 electoral votes, was been won by Republicans in every election since 1980 until 2008, when then-senator Barack Obama flipped the state blue.

In 2012, though, Republican candidate Sen. Mitt Romney was able to reclaim North Carolina for the Republicans.

However, with a Democratic Governor and Attorney General, it’s a state the Democrats are eyeing as one they can turn blue once again.

Meanwhile, Pennsylvania had voted for the Democratic candidate every year since 1992, until the 2016 election when the state supported Trump.

Political analyst websites FiveThirtyEight and Decision Desk HQ both project Biden as the winner of the 2020 U.S. election.

By Wednesday evening FiveThirtyEight said Trump is “slightly favoured” to win in Ohio, though Decision Desk HQ says the state is still a “toss up.”

Iowa, too, is still considered to be a toss up by both websites.

These predictions could change day by day as the election nears.

While experts identify states they think will be competitive in a given election, that does not mean other states can’t also shift.

Hurl pointed to some southern states, namely Texas and Georgia, which are becoming more competitive for the Democrats, while some states in the middle lakes region — Wisconsin, Minnesota, Pennsylvania and Michigan — are shifting toward the GOP.

“I think that we might be returning to an era over the next decade in which a larger portion of the map — the political map — is in flux,” he said.

But, if there is going to be a surprise on Nov. 3, Lebo said he expects it will be in favour of the Democrats.

“I think the surprise would be helping Biden,” he said, adding that he “wouldn’t be shocked” to see the Democrat candidate win in Texas.

Winning Texas, which has 38 electoral votes, would be a large pick-up for Biden, and would be a dramatic shift, considering the state has voted Republican in every election since 1980.

What’s more, Lebo said it’s “quite possible” that Biden could win 350 to 380 electoral votes by flipping some “unexpected states.”

“There’s all sorts of other things that should be killing Trump in this election. The virus especially (and) the state of the economy, should really hurt him,” he said. “If it’s anything like a normal year, then it will.”