Counties Kent and Sussex are the first in the country to have restrictions on water use implemented this month. From Friday, August 12, millions of people living in these regions will be banned from using hoses to water the garden, fill up paddling pools or wash their cars. South East Water has attributed the temporary measures to the record highs experienced last month when 40.3C was hit for the first time, forcing it to produce an additional 120 litres of extra water. It said this was the equivalent of producing water for four towns the size of Maidstone or Eastbourne.

The company said it has been left with “no choice” with Kent being the driest since records began in 1836 and Sussex since 1911.

But just when people begin to get their heads around the idea, an African plume is set to rock the boat in the UK once again.

Interactive weather model WX Charts shows that, on the day the ban comes into place, large parts of the South East will see highs of 34C by midday. 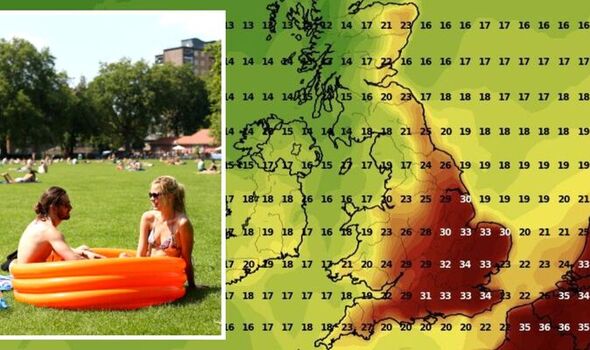 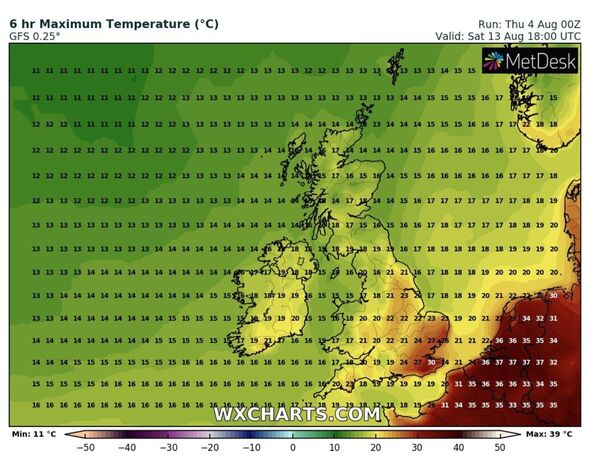 He told Express.co.uk: “A spike from the south out of Africa and up from Spain and France again makes 34C entirely possible.”

Maps show both Kent and Sussex potentially recording the highest temperatures that day out of the South East and the rest of England.

But the public must not give in to temptation of setting their paddling pools up. CEO of South East Water David Hinton said: “This has been a time of extreme weather conditions across England with us experiencing the driest start to the year since 1976.

“During July in the South East, we have only seen eight percent of average rainfall for the month. 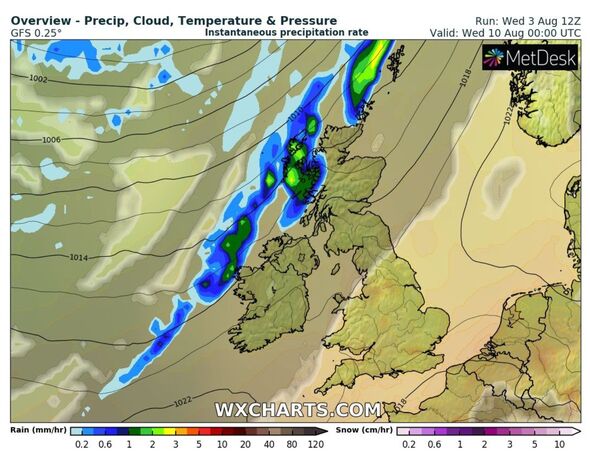 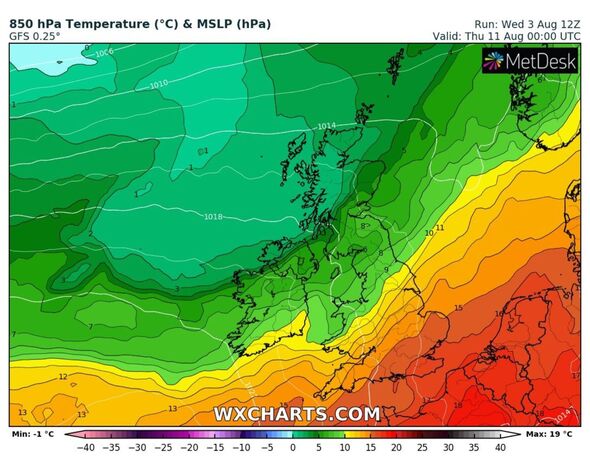 “As the long-term forecast for August and September is for similar weather we are taking this step to introduce temporary restrictions on the use of hosepipes and sprinklers to make sure we have enough water for our customers’ essential use, ensure we can serve our vulnerable customers and to protect the local environment.

“By taking this action now we will be able to reduce the amount of water we take from already stressed local water sources.”

For at least the next fortnight, sizable bands of rain move in from the Atlantic but they completely miss the South East and much of central parts of England. Mr Hinton also said pipe leakages were contributing to water supply issues.

He added: “Water is dense and to transport it successfully to homes and businesses we have to operate the system under immense pressure so some leakage is inevitable.

“Tackling leaks is a long term challenge and one that the industry has been making good progress on.

“In our supply area before the heatwave arrived we were at an all-time low having cut down on the number of leaks across our region meeting the target set by our regulator for the last 13 years in a row. Despite this, we’re increasing the resources available to tackle leaks and are expanding our leakage team by 20 percent.”