Maps from WXCHARTS show a heat plume sweeping over from the Atlantic in a westerly direction as October arrives. A high pressure system will also be pushed towards southern areas of the UK during the beginning of next month, meaning there will be “a fair amount of sunshine” according to Netweather. Temperatures will also be 2C above average during October, forecasters claim.

Netweather’s long-range forecast said: “Into early October there is an increasing chance of high pressure pushing in from the south and bringing mostly settled and warm weather, probably with a fair amount of sunshine for most, and a likelihood of more changeable weather holding on in the north and west of Scotland in particular.

“Temperatures will tend to be close to or just below the long-term seasonal norm early to midweek, with some cool nights midweek as the high pressure moves in and some fog patches in places, but will tend to rise above normal late in the week as there is a significant chance of southerly and south-westerly winds setting in.

“Mean temperatures are thus expected to be a little above normal overall, but only by 1C or less in most parts of the country. 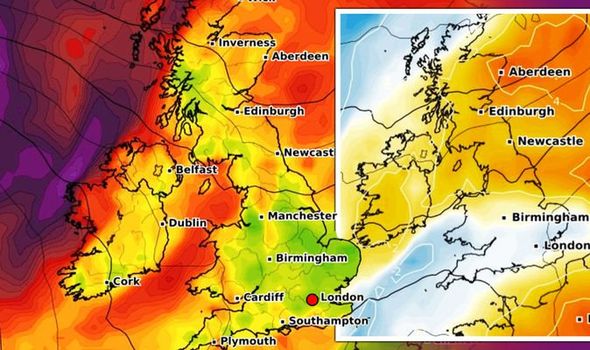 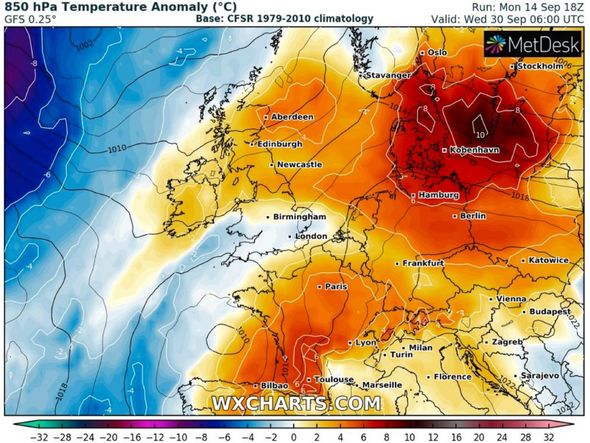 The latest long-range forecast on the Met Office website between Wednesday, September 30 to October 14 predicted temperatures to rise “above normal”.

It said: “It seems likely that there could be changeable conditions with alternating periods of relatively settled weather, bringing an increased risk of mist and fog in the morning, and more unsettled conditions.

“The best of any settled spells will be in the south and there is a signal that these could become more prolonged during early October.

“Overall, temperatures are expected to be around or slightly above the normal. 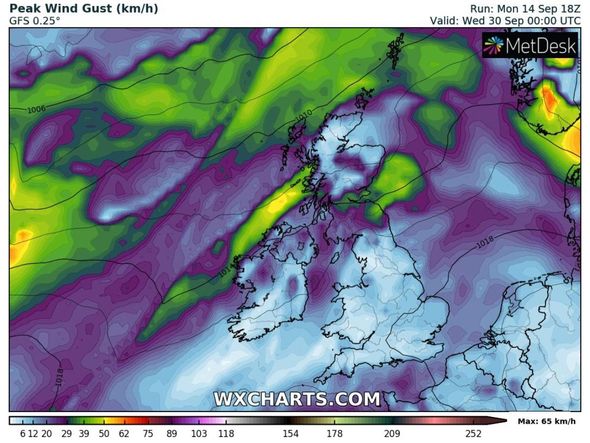 “However, variations are to be expected as a result of the shifting weather systems, giving potential for both warm and cold spells.”

But before that, the rest of September will see Britain sizzle in highs that reach around 31C.

The UK will also bake in hot air being swept over from the Atlantic this week.

But a cold front will also arrive mid-week, resulting in rain and cloud. 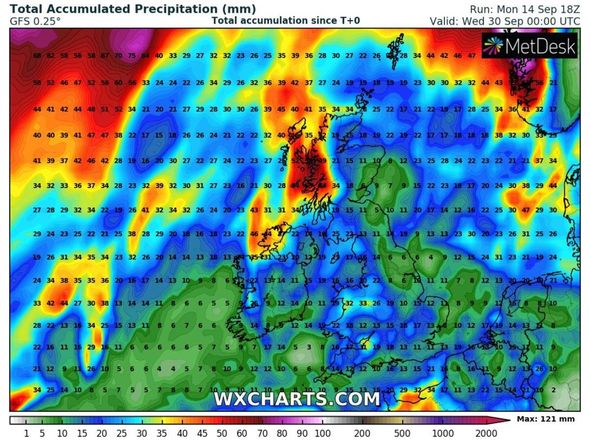 Nick Finnis at Netweather said: “On Wednesday, a cold front will continue to move south from Scotland across Northern Ireland, northern England and on towards the Midlands, Lincolnshire and Norfolk, a band of cloud and some drizzle along the front.

“South of the front across southern England and south Wales – a sunny and very warm day, temperatures reaching 23-27C.” 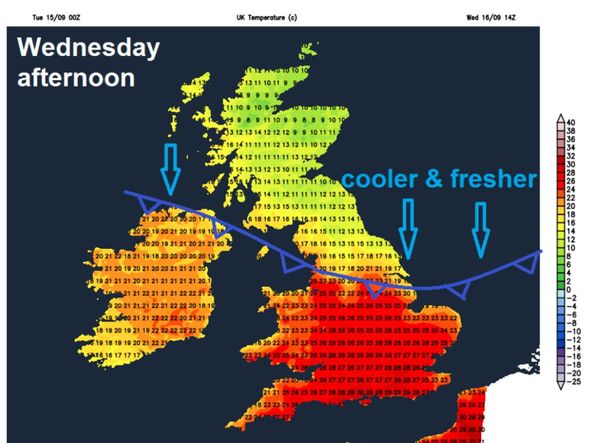 “Weak cold front will clear south from southern England on Thursday morning, so all parts of Britain in a cooler and fresher airmass, with temperatures generally close to the seasonal norm.

“But with high pressure in control, it will be a dry and sunny day for most. Temperatures reaching 17-20C.”

Mr Finnis added this weekend will also see a mixture of sunshine and showers.

He said: “High pressure looks like it will sit close to northern Britain through the weekend, so for many, it will dry and settled throughout the weekend.

“Best of the sunshine on Saturday perhaps, southern areas perhaps turning cloudier from the south on Sunday, with a chance of showers pushing up from France, though some uncertainty over this.”

Meghan recounts conversations with royals about her son’s skin tone.