Parts of the UK will see temperatures plummet by as much as 12C in places with winds peaking at 45mph. The bank holiday heatwave which saw temperatures hit 25C in parts came to an abrupt end on Sunday as the mercury dropped significantly and clouds have formed.

The Met Office has forecast a sharp drop in temperature across Britain in the coming days. 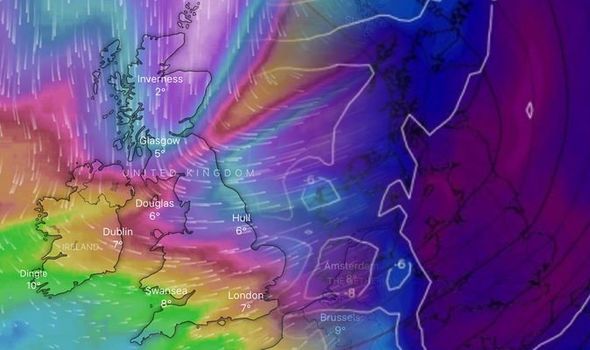 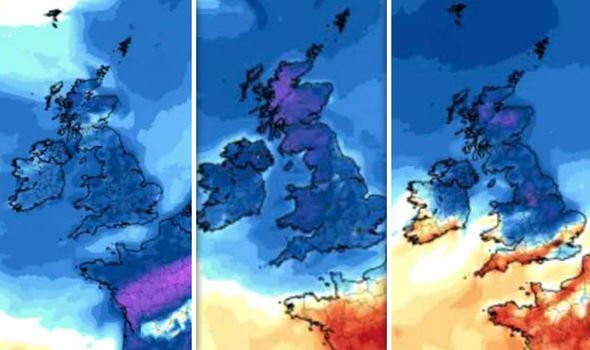 According to Severe Weather, an intense cold blast began on Saturday night and has spread across the North Sea and Scan towards the south.

This cold front is responsible for the drop in temperature and may even lead to snow.

A 850 mbar temperature anomaly has been detected across western and central Europe from Saturday night through Sunday and Monday.

The very cold air mass will begin from the north and will spread across England, Wales and Ireland on Sunday. 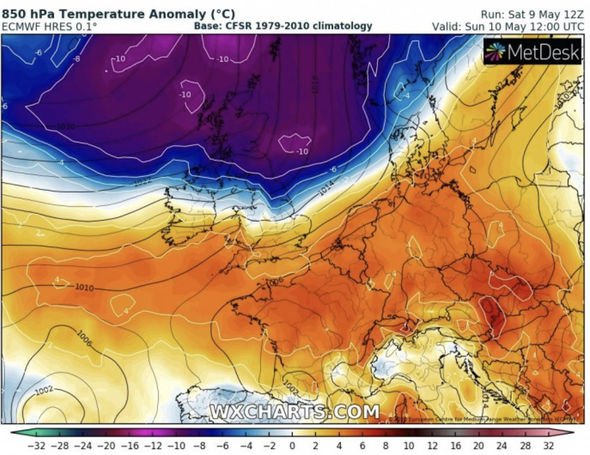 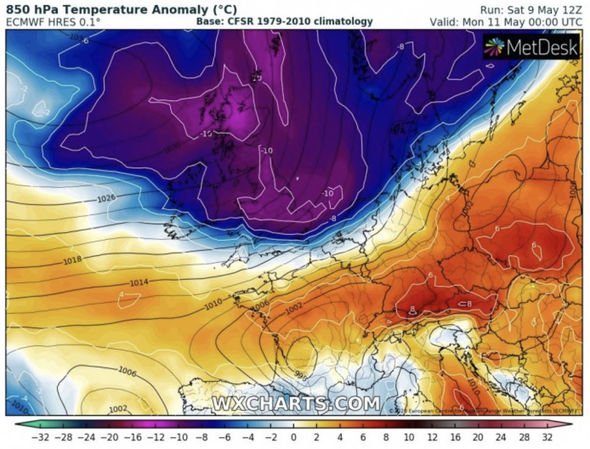 Overnight to Monday, the temperature anomaly is forecast to become more intense, dropping by around 10C than is normal for this period across large parts of western Europe.

Around northern parts, a cold front will spread across western Europe.

A sharp temperature gradient is visibly developing along the leading cold front overnight to Monday, due to be even more intense during the afternoon hours.

Along the east coast of the UK, temperatures are forecast to drop to 6C to 9C, bringing a sharp end to the above-average warm weather experienced across Britain in recent weeks.

According to the BBC, winds reaching speeds of 40mph to 45moh could hit eastern parts of the country and along the English channel.

England’s south-west coast will see the warmest of today’s weather, where the mercury will hover in the mid-teens, reaching highs of 17C in Plymouth and 15C in Brighton and Southampton.

The Met Office has forecast wintry showers to hit Scotland, Northern Ireland and the north of England. 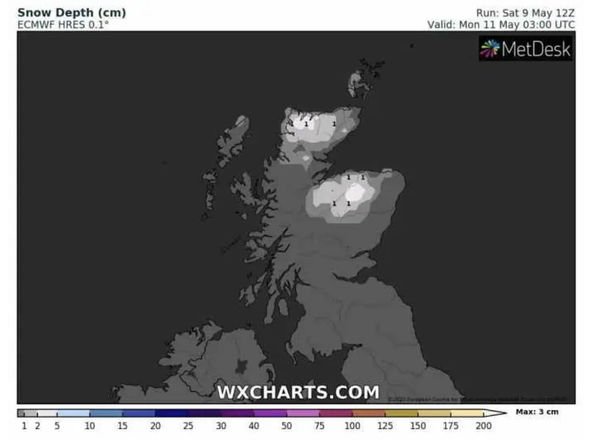 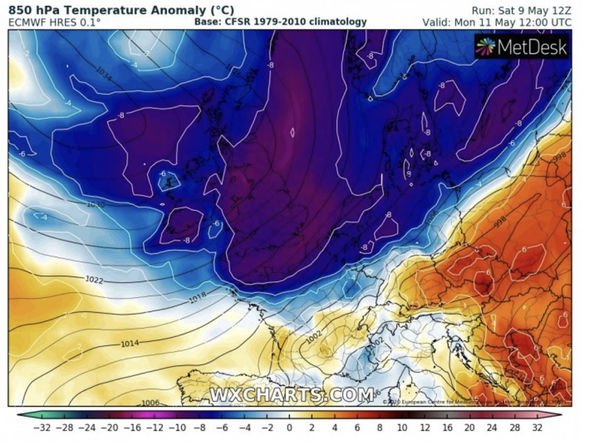 A Met Office spokesman told the Mirror: “Sunday will be a bit of a shock to the system for many places, feeling much much colder than recent days.

“This process starts through Saturday evening and night as a cold front across northern Scotland drifts south into Northern Ireland and the north of England.

“Behind it, the air turns much much colder with wintery showers and a few icy patches, but to the south of it, it’s still relatively mild with temperatures hanging on into double figures.

“On through Sunday this cold front will continue its southward journey across England and Wales, not much rain left on it by this stage but a real dividing line between relatively warm weather hanging on in the south and something a good bit colder for the north.

“In fact temperatures could be 10 to 12 degrees colder in a few spots compared to what we saw on Saturday afternoon.

“The cold weather continues into Monday, but with a few showers along the east coast.

“Elsewhere, lots of dry weather but the wind really will have an edge to it, particularly across the south-east corner, feeling just five degrees or so in London.”

Many areas will be dry, but a few showers are expected over northern Scotland and the eastern side of England.

The weather will feel very chilly in the wind.