Low pressure is forecast to sweep over the UK this week from the North Atlantic, potentially pushing wintry conditions as far as South East England. Central parts of Scotland could be hit with snow depths of eight inches on Christmas Day, according to WXCHARTS’ latest models. Temperatures could also plunge as low as -5C in the same region on Friday, December 25 as cold air lingers throughout the week.

The fierce chill is expected to hit northern parts of England by Friday, with Carlisle forecast to see -3C and Scarborough could see 0C.

Southern regions of England are likely to stay in single figures, with London and Plymouth left shivering at 1C.

Gavin Partridge, owner of GavsWeatherVids, predicted the cold front to “flood the country” on Christmas Eve.

It said: “On Wednesday, December 23, cold winds from the north begin to dig into Scotland, with low pressure across England and Wales still bringing relatively mild temperatures and some outbreaks of rain would be very probable. 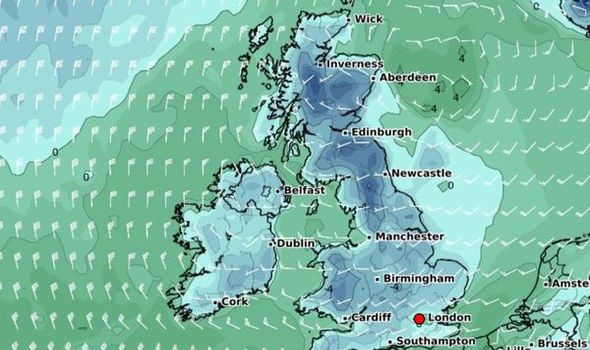 “It is going to be a wet early part of next week, with Monday, Tuesday and Wednesday going to bring quite a lot of rain particularly to central parts of England and Wales.

“It is drier and colder across Scotland and showers could be turning wintry in central and northern parts of Scotland.”

The forecast added Britons could wake up to a “white, crunchy” Christmas Day as frost is expected to arrive.

The forecast said: On Christmas Eve, the low pressure moves away to the east and we pull in this cold north to north easterly wind. 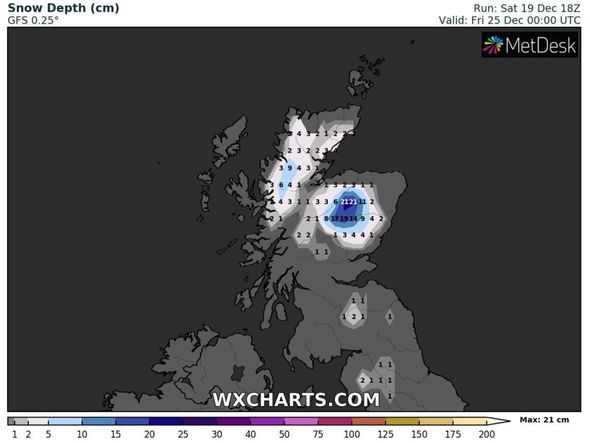 “Temperatures show it will turn cold across all parts of the country on Christmas Eve as -5C is flooding the country from the north.

“There’s a possibility that the rain may have a wintry flavour on its back, it just depends whether we get an undercut of the cold air from the north.

“The general idea is outbreaks of rain in the south and east to begin with, moving away to the east, then brighter skies pushing down from the north.

“In those brighter skies there could be wintry showers running down the east coast and snow showers to low levels probably. 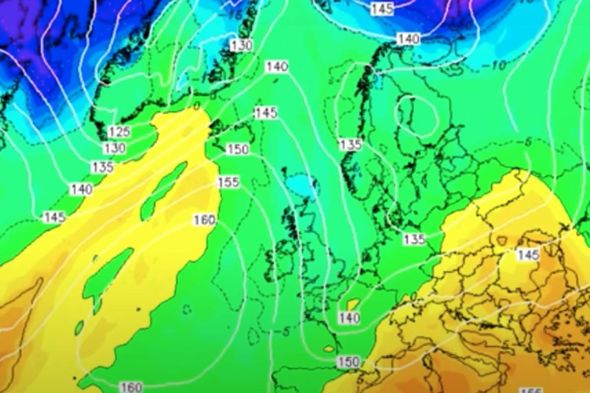 “Christmas Eve will be cold this year if the forecast is correct.

“It’s likely to go frosty overnight into Christmas Day, which should lead to a nice white, crunchy start on Christmas Day.

“Most places in the UK look like they will have a cold Christmas Day but with plenty of sunshine. 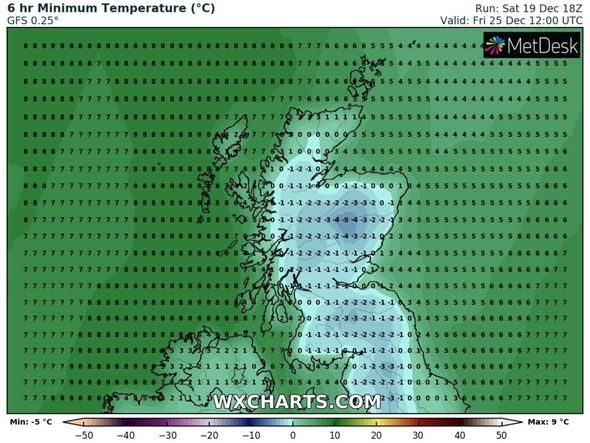 The BBC’s long-range forecast added Christmas Day could see wintry showers due to the north-westerly flow.

The forecast said: “The first half of this week will continue in the same vein as the previous week, with additional low pressure areas continuing to track north-eastwards over the UK.

“Because we have relatively high pressure to the north of the UK, the north Atlantic low pressure track is displaced a bit further south than where it would normally be in December.

“By Christmas Eve and Christmas Day, confidence is growing for at least a couple of days of colder and brighter weather, as winds change to a north-westerly direction and a ridge of high pressure then moves in from the west.

“Scattered wintry showers in this north-westerly flow may fall as snow, raising the possibility of a white Christmas in parts of the UK! 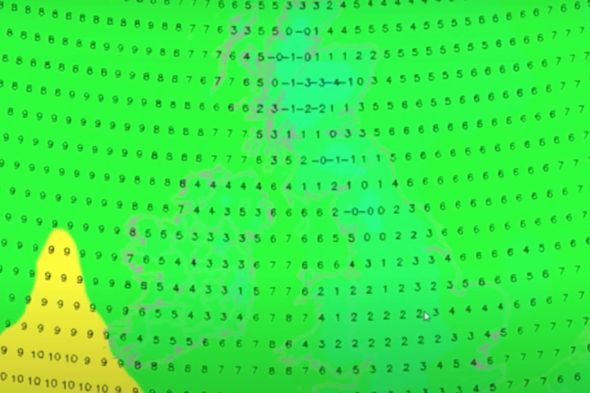 “Scotland and the hillier parts of northern England and Wales stand the best chance. Stay tuned to the forecast over the next few days. Some sunshine by day, but a frost is very likely at night for many places.”

The Met Office added a low pressure system could strike between Friday, December 25 and Sunday, January 3.

“These conditions being more severe in the north but could affect all areas of the UK at times.

“Temperatures either close to or below average for the time of year.”