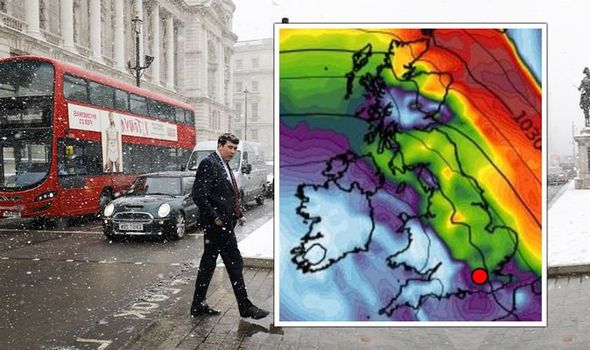 The entire country is on alert for an Arctic deluge at the start of February to bring the settled spell to a frenzied finale. Britons lulled into a false sense of security by clear skies and bright days are warned to brace for the full fury of winter. However, snow-haters can relax with the icy snap likely to be brief and February forecast to flip-flop between cold and clement.

James Madden, forecaster for Exacta Weather, said: “We are expecting to see some changes as we head into the final month of the winter.

“Cold and snow will encroach from the north during the early part of February, and some of these wintry downpours may reach as far south as central England and the capital.

“The good news for snow-haters is that these blasts may only be brief as the mild weather from the Atlantic pushes across the UK.

Britain’s weather is currently dominated by a huge region of high pressure straddling the country.

It is keeping wind, rain and snow at bay while allowing temperatures to plummet under clear skies.

Stubborn high pressure will dig in through the next week before finally giving way to icy winds from the north.

Mr Madden added: “This winter has so far been dominated by high pressure resulting in little in the way of cold spells and widespread snow.

“However, February certainly looks like more topsy-turvy with the weather flipping between cold and mild.”

It comes as the nation shivers in sub-zero temperatures but little in the way of rain or snow.

Apart from the odd wintry shower across Scotland and northern England, calm weather will hold out for another week.

Meteorologists predict high pressure to remain in charge through the last part of January.

Netweather forecaster Ian Simpson said: “High pressure is still dominating the weather, and it doesn’t look set to move very far anytime soon ‑ even at 10 days out, most of the forecast models still have high pressure very close to or on top of the British Isles.

“The weekend looks set to be mainly dry and cloudy, with westerly winds bringing plenty of cloud and moisture into our area of high pressure.

Plunging temperatures and snow during the start of February may be driven by fierce storms barrelling in from the south, according to forecasters at Metcheck.

A spokesman said: “The end of the month is expected to be very stormy with low-pressure areas tracking in on a southern track bringing the risk of severe gales and snow for more southern areas.”

Bookies are getting ready for a flurry of bets on winter weather with Coral slashing the odds from 3-1 to 6-4 on the coldest February ever.

Ladbrokes make it 3-1 on next month entering the books with 2-1 on a record-smashing winter.

Ladbrokes’ Alex Apati said: “With a big freeze set to batter all four corners of the UK, the odds suggest we’re in for some record-breaking low temperatures in the coming weeks.”

Coral’s Harry Aitkenhead added: “We are going to have to endure a very cold end to January and winter is far from over yet.

“We have slashed the odds on this February entering the record books as the UK’s coldest second month of the year ever.”

Jim Dale, author of Weather or Not? and meteorologist with British Weather Services, said February will deliver a mixed bag of cold, snow, wind and rain.

He said: “We have been dry for a very long time so we would expect some change soon, and this should happen during the start of February.

“There may well be brief, sharp incursions of cold weather from the north and the north-east, although we will also see an Atlantic influence.

“There will be more precipitation during February than we have seen this month, but I expect mostly rain with snow over higher ground.

“It is a case of watching this space. February will deliver a mixed bag of weather.”