Weather forecasters predict the temperatures will plunge to well below freezing from Thursday, December 3, as many towns and cities leave the strictest lockdown levels. The chilling weather is set to be accompanied by heavy snowfall, which is expected to hit Scotland and parts of Northern England.

Weather charts show temperatures will start to plunge from late next week, as the mercury dips below zero.

The Arctic blast will bring with it heavy snow flurries which could spark widespread chaos in the north of the United Kingdom.

Charts from Netweather show snowfall is expected from December 3, lasting for over a week.

The weather map shows there is currently a 100 percent risk of snow in parts of Scotland at 6am on Thursday 3. 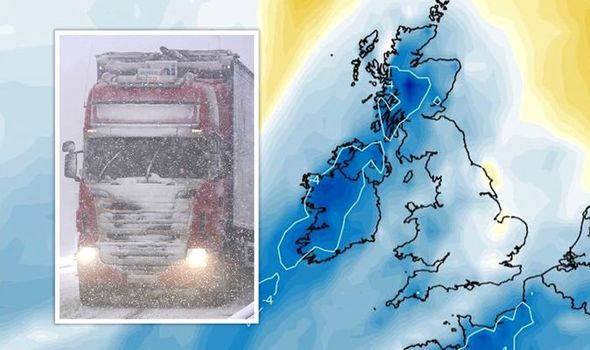 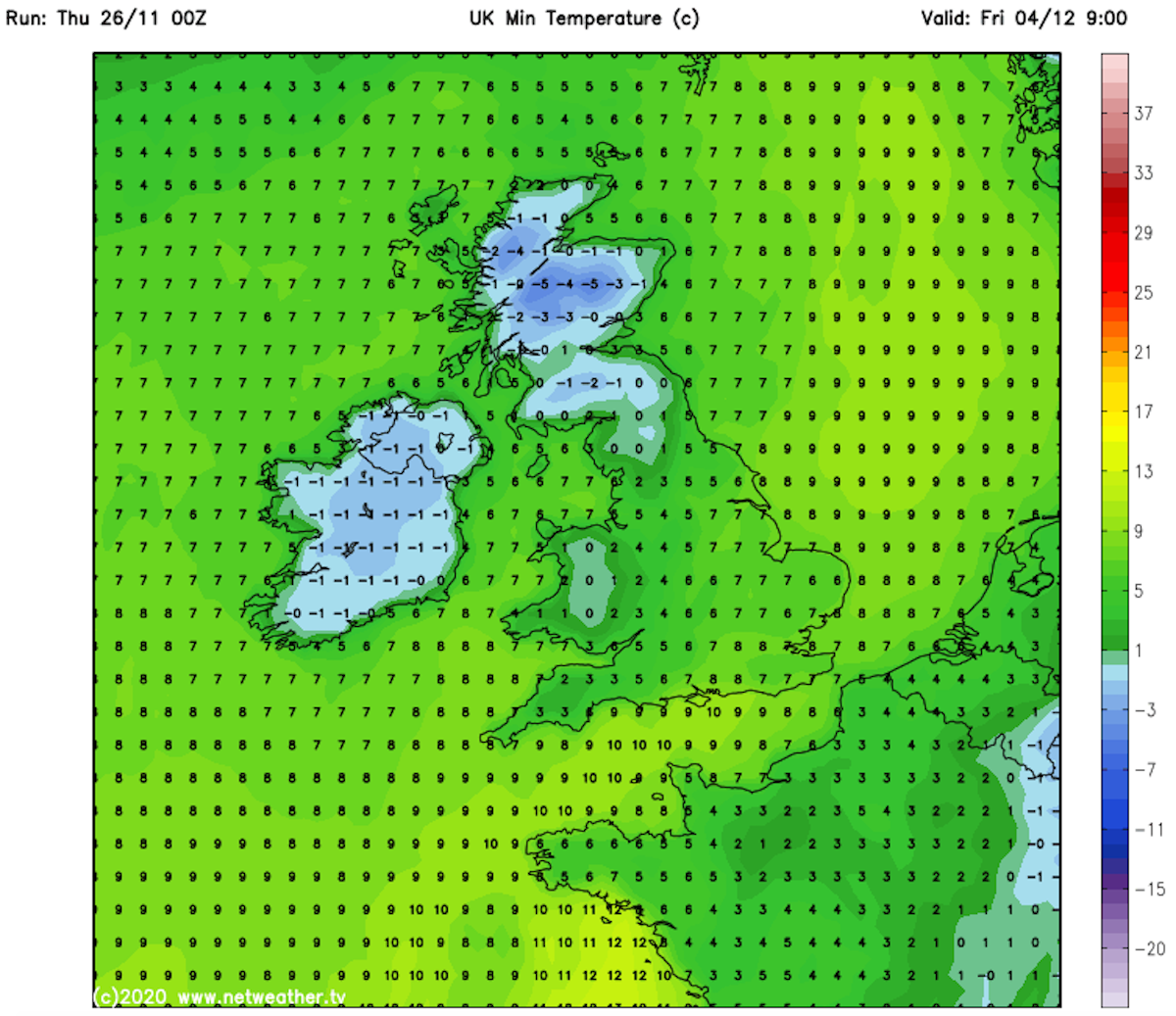 The snow risk is shown by the bright colours, with the red and white areas indicating between a 80 and 100 percent snow risk.

Temperature charts show Scotland is set to reach lows of -5C on Friday at 9am, which coincides with further snowfall.

The map shows the north of the UK turn dark blue, while the south east stays green as it is set to avoid the plummeting temperatures.

Netweather’s snow risk chart shows the chance of snowfall spreads further south on Friday into northern cities, which is indicated by the colourful areas on the map. 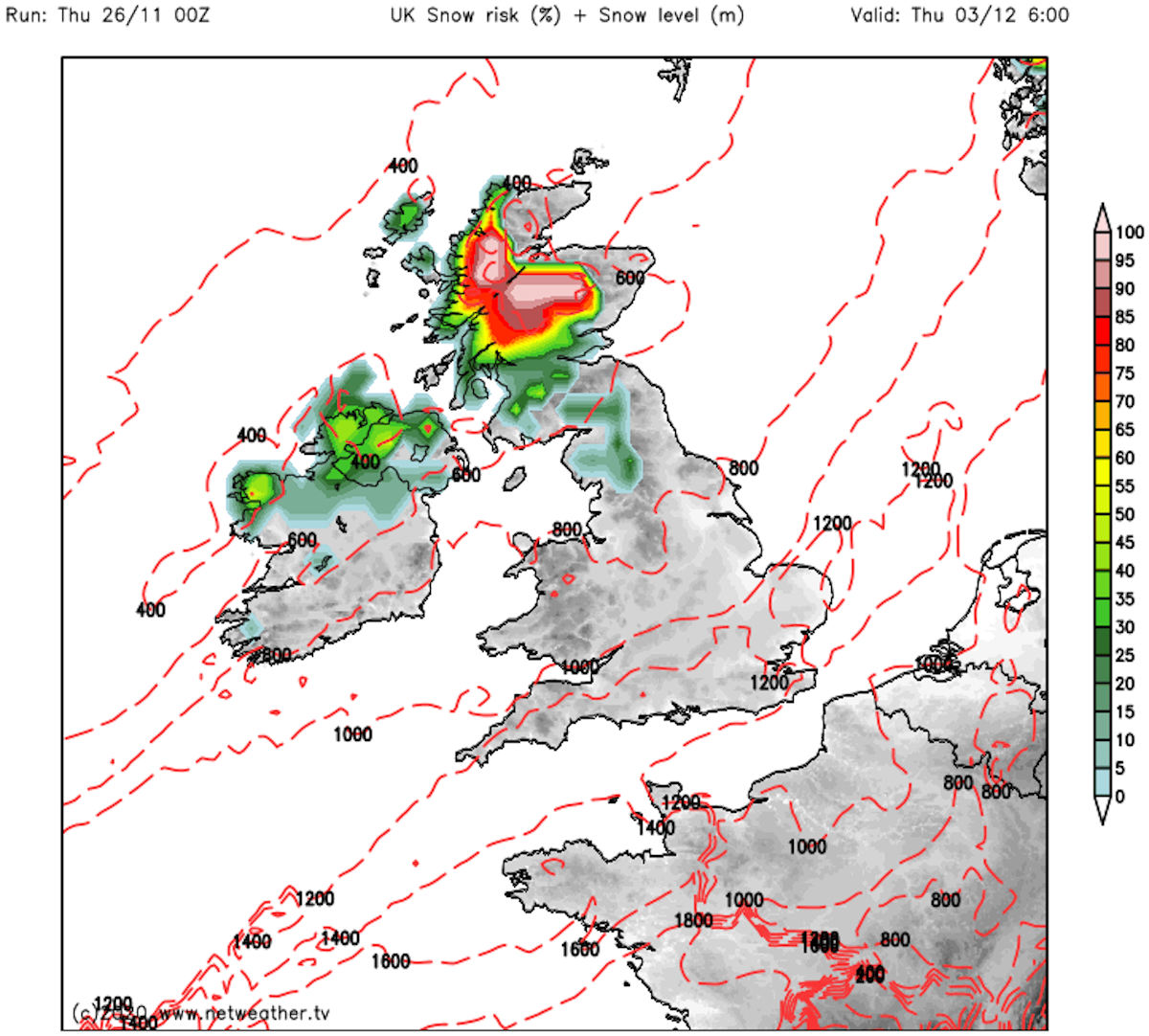 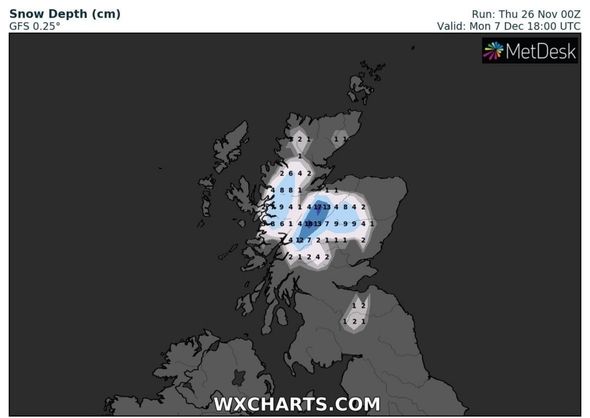 Monday December 7 is expected to be particularly cold in Scotland, with temperatures as low as -8C forecast by Netweather.

Weather maps from WXCHARTS show a similar drop in temperature is expected in northern parts, with -6C forecast at 12pm.

A second chart shows Scotland is set to be blanketed in heavy snow by Monday evening, with up to 18cm (7inches) forecast in the north west.

The icy temperatures are set to continue into Tuesday, with a weather map showing the UK turn blue as the mercury stays below freezing for much of Britain. 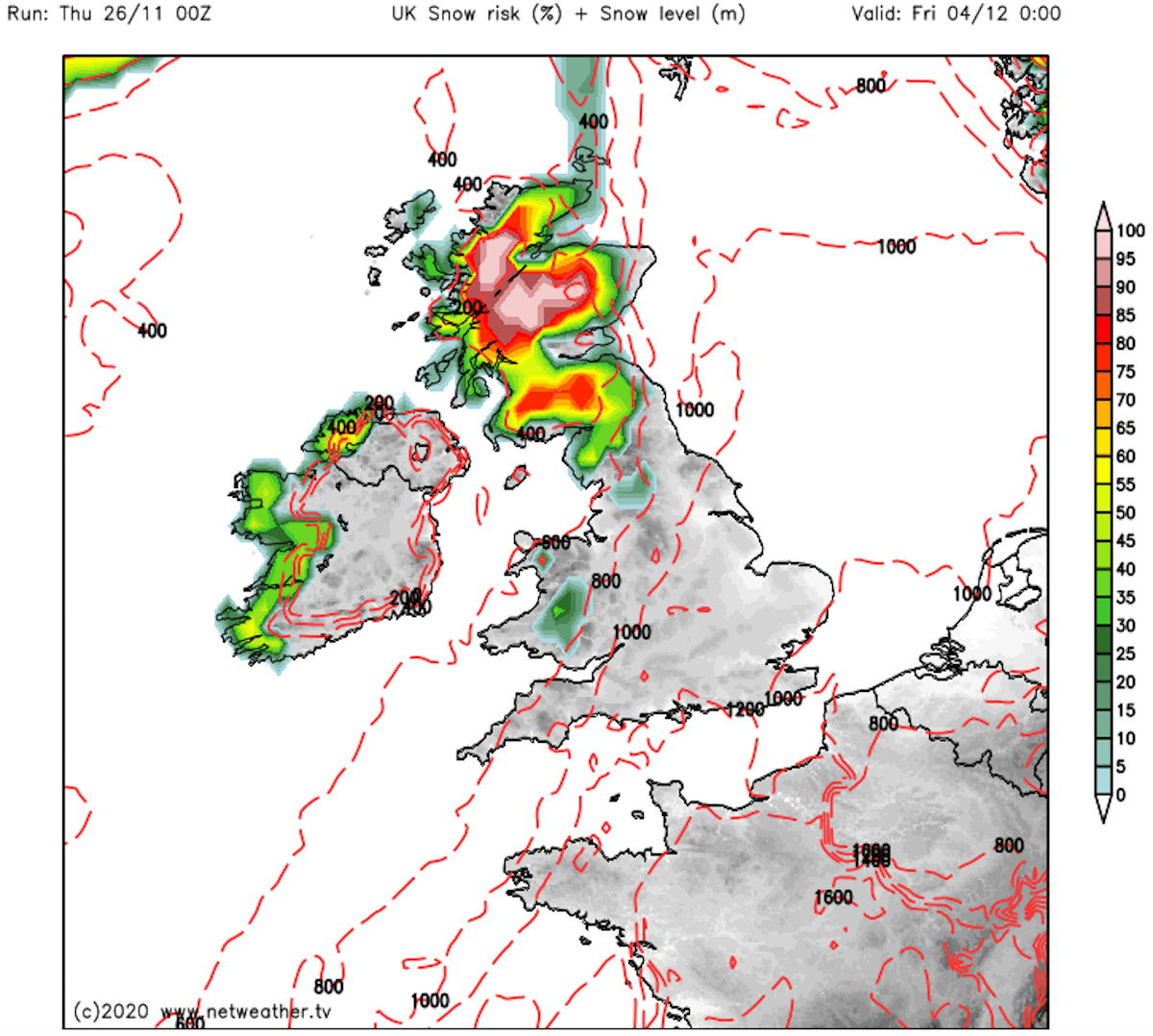 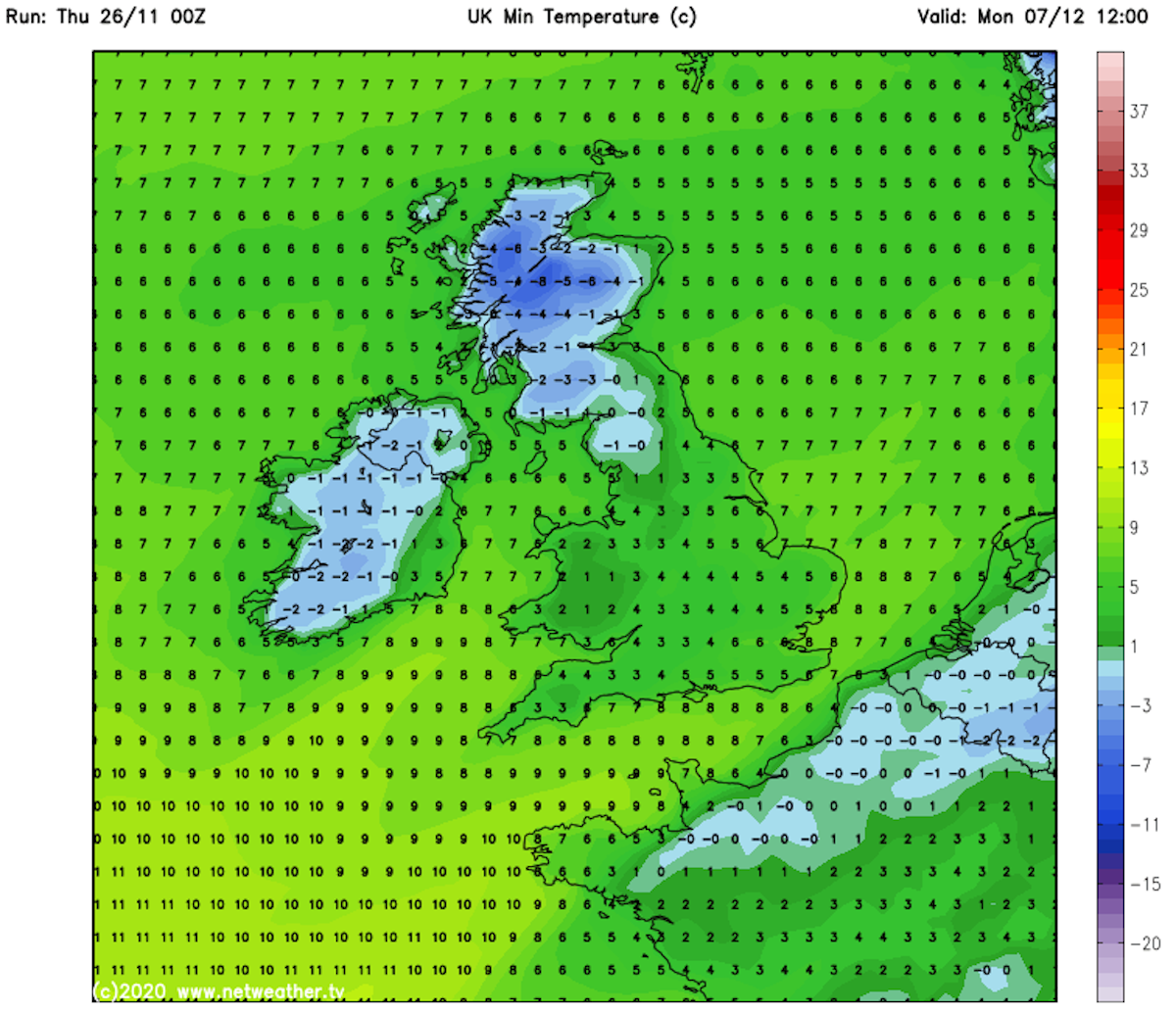 The Weather Outlook’s 14-day weather forecast said: “Temperatures often close to the seasonal average, although it could be quite cold in places where fog forms at night and lingers late into days. Frost is likely to be patchy.

“Towards the end of the period the risk of rain may increase and over high ground in the north there could be sleet or snow.”

Netweather’s forecast for November 30 to Dec 6 said: “While precipitation from the fronts is forecast to fall entirely as rain at low levels, some hill snow is likely, particularly in Scotland.

“Mean temperatures will therefore be a little below the 1981-2010 long-term average over much of the country.” 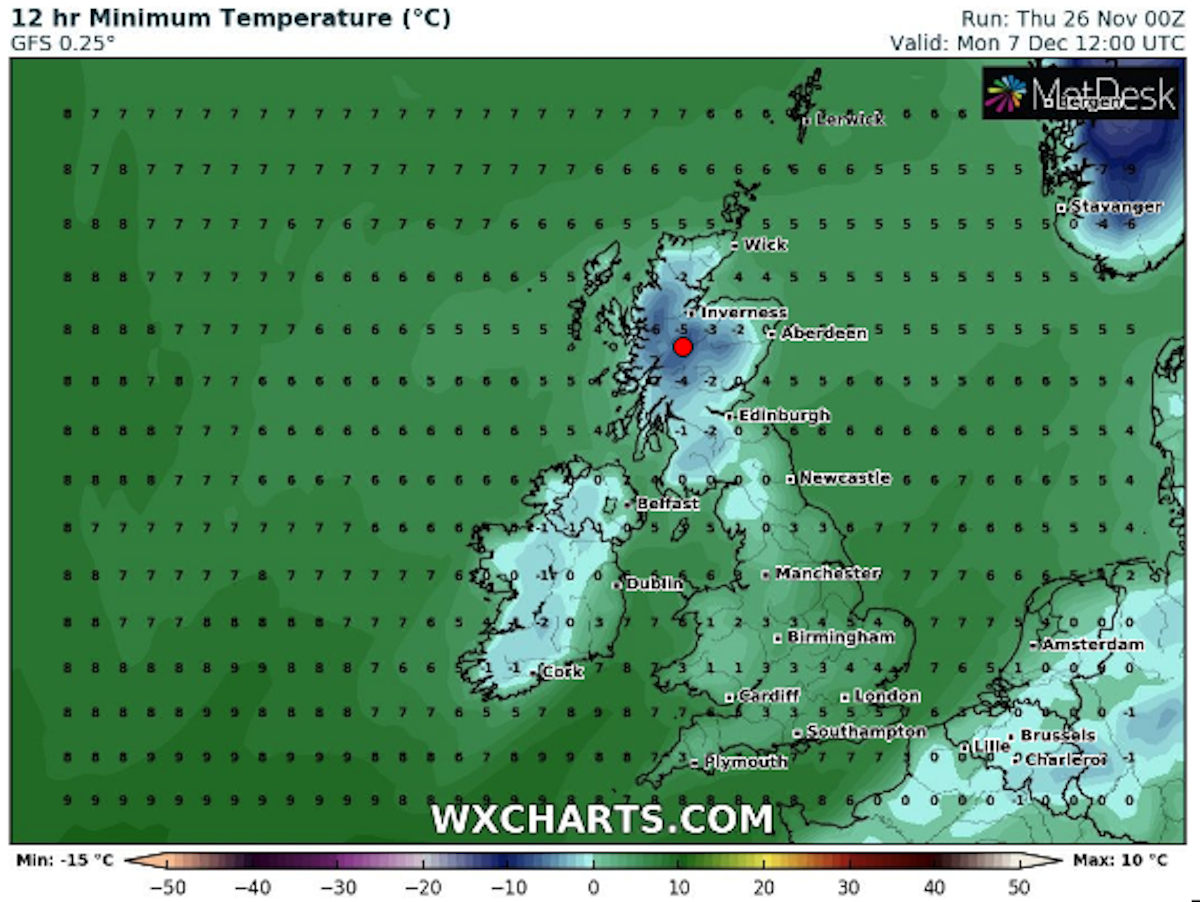 BBC forecasters also warned colder temperatures are expected from the end of next week.

They state: “The most likely outcome for the second half of the week is for Atlantic low pressure areas to encroach from the north-west…

“By the end of the week, there is a reasonable chance of colder air returning from the north, with some night frosts and scattered wintry showers.”

Met Office forecasters said: “Most confidence can be placed in that the south is likely to continue to see the majority of fine and settled conditions, and the north and west seeing the worst of any unsettled conditions.”