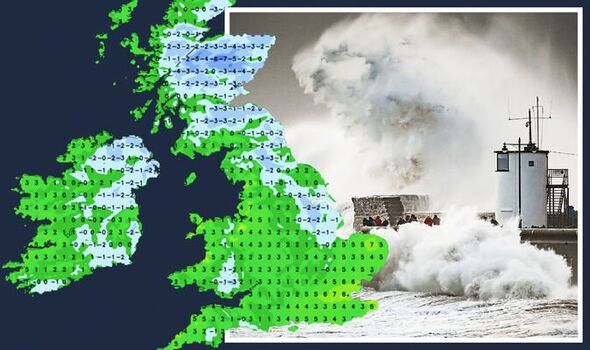 A dramatic change in the weather will also unleash heavy downpours through the coming days, forecasters warn. It comes after an Easter mini-heatwave pushed the mercury to 23C in parts during the warmest spell of the year so far.

Sunshine and blue skies will through the coming days give way to cloud, morning frosts and chilly winds as Britain’s weather returns to form.

Jim Dale, meteorologist for British Weather Services, said: “Once we are out of Easter, the weather will once again turn very changeable.

“The flip-flopping to and from less settled and cooler conditions that we saw earlier in the month is likely to resume.

“There is the potential for more in the way of rain through the next week as weather fronts from the Atlantic take more of an influence over the weather.”

Temperatures overnight will drop close to freezing bringing the risk of frosts and even a dusting of hill snow, he added.

He said: “Through the week we expect to see temperatures of around 1C and 3C and there will be some colder starts.

“This will see the return of some morning frosts.

“It will be dry and warm in the sunshine, but out of the sun, and in the breeze, especially along the coasts it will feel like you need to put on a jersey.”

A change in weather patterns allowing eastern high pressure to build while low pressure gathers to the west will drive in cold easterly winds.

Weather models reveal bitter winds coming off the North Sea will make it feel close to -7C in parts of the UK.

Feel-like temperatures elsewhere will hover between freezing and low-single figures in icy gusts.

Maximum temperatures by the end of the week will struggle to rise much above 15C, much cooler than the low-20Cs enjoyed over easter.

Britons who have enjoyed waking to golden rays should brace for frosts and chilly showers.

Met Office meteorologist Dan Stroud said: “With clear skies, temperatures will dip into single figures so there is the chance of a rural frost particularly across parts of the northwest.”

Heavy downpours will bring an unwelcome drenching to parts of the country, he warned.

He added: “Showers will start to break out more widely than on Monday and some of the showers on Tuesday will be reasonably heavy.

“It will be rather chilly at times especially across some eastern areas later in the week.”

Meteorologists have warned sun-lovers to brace for a cooldown as north-easterly winds take a bite out of the summer-like temperatures.

Heavy rain in parts later today will add to the gloomy feel with showers turning widespread into tomorrow.

Parts of the country will enjoy a couple more days of warm weather before the mercury dives, according to weathertrending meteorologist John Hammond.

He said: “In the week ahead, if you’ve had it warm you are going to notice a cooldown especially later in the week with a cool north-easterly.

“On Tuesday we could see some more prolonged rain, but showers will be rather more widespread.

“Towards the middle of the week, by day it will feel fine, but the air will be inherently chillier by then and overnight we are not ruling out some frosts during the middle part of this week in rural prone spots.

“There will be some dampness around which will add to the chilly feel.”

It is not all bad with the chance of some further sunny spells and dry weather on the way he said.

He added: “It won’t feel anything like it has done for some of us over the last few days, although there will be some fine weather around.”