The Met Office has issued two yellow weather warnings for areas in England due to dense fog. However, this should lift in time for the weekend, which could see temperatures soar up to 17 degrees. The warnings cover areas in the north east and south of England bringing risks of travel disruptions.

For the south, the Met Office said: “Fog and freezing fog patches will be dense in places with visibility less than 100 metres for some to begin with today.

“Early fog will, however, soon lift and clear this morning.”

In the north east, the Met Office said some places will be “unlucky and hang on to mist and fog patches well to the afternoon, most likely parts of the Vale of York.” 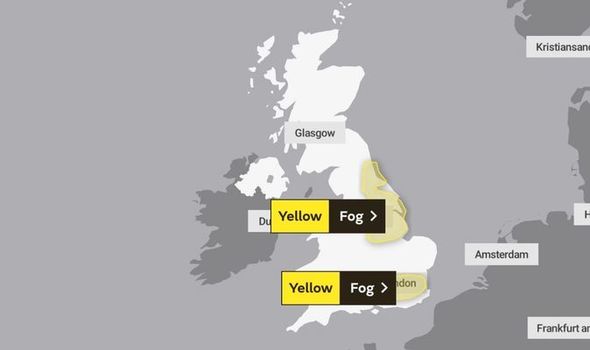 “But this year is likely to be very different and we’re not entirely sure how much bonfire smoke there will be.

“Nevertheless it is still likely to be a chilly and in places very foggy start to Friday.”

The north Midlands, north east England where will be covered in a “very dense fog” at the start of Friday, according to Mr McGivern. 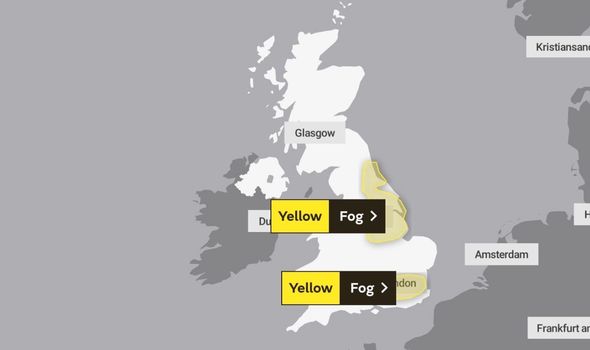 The dense fog may not clear for some time on Friday, bringing chillier temperatures in parts of the UK.

Mr McGivern said: “The dense for there persisting for much of the morning I think past the Midlands into north east England and a few other patches elsewhere.

“In some places the fog might not burn off until the afternoon and that will suppress the temperatures in those areas so feeling cold where the fog remains.”

But some areas were the fog is less persistent, will see a few sunny spells. 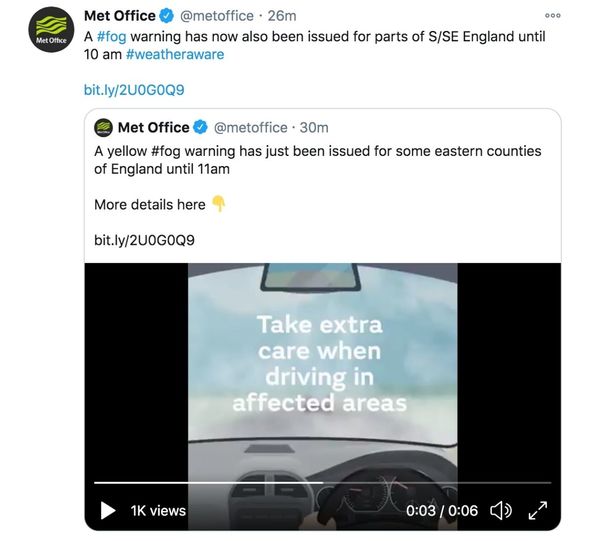 “Other parts of Britain see a mixture of sunny spells, brightness and then more cloud.”

There will be a breeze in the south west of England on Friday.

Mr McGivern added: “That breeze heling to bring areas of cloud across much of England and Wales into Friday evening.

“The cloud is medium and high level cloud.

“Whilst it could be thick enough to give a few light showers it will be falling from quite a height so a lot of that might just evaporate before it reaches the ground.” 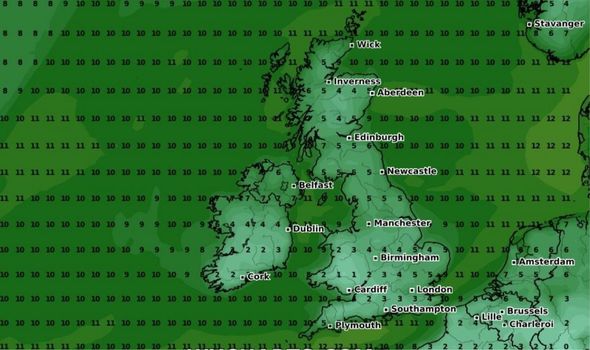 Ms Farrow added that “widespread low cloud will flow in over England and Scotland” by Friday evening.

She said: “This cloud will result in patchy rain over SE Britain on Friday evening which moves northwards over more of eastern England with some heavier bursts towards midnight.”

Chilly temperatures are set to hit the UK on Friday night before a much milder weekend approaches.

Temperatures could climb up to 16 or 17C at the weekend for southern parts of the country.

However, this could be the last of the mild weather before forecasters have predicted an “early winter” later this month.