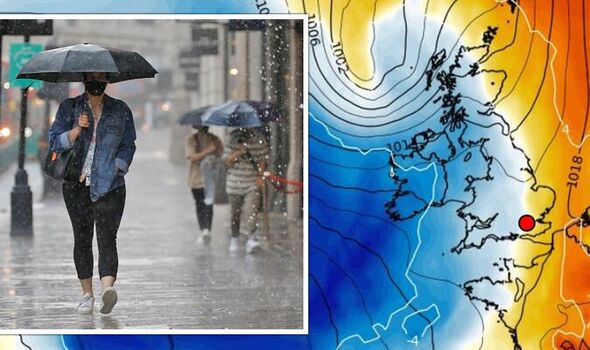 After delivering the warmest spell of the year so far, the British weather is about to turn the heating back down. Balmy southerly winds from Africa will give way on Easter Monday to chilly northeasterlies and rain-laden fronts from the Atlantic.

Temperatures will dip to zero in parts of the country this week as forecasters warn to ‘get jumpers back out’.

Jim Dale, meteorologist for British Weather Services, said: “Rain will start to set in across Scotland on Sunday as fronts come in from the Atlantic.

“For the most part this is the picture for the rest of the week after the bank holiday.

“There will be the risk of frost in parts of the country with overnight temperatures of around 1C to 3C.”

As the sun sets over the Highlands of Scotland, freezing temperatures could even bring a touch of snow.

Mr Dale added: “There will be the chance of some wintry showers over the hills and mountains in the north.

“It will feel cooler compared to the past few days, and even cold overnight.

“It is time to get the jumpers back out.”

Further fine weather is forecast through today before the return to cooler and wetter weather.

“As we head into Monday there is a change coming and it will turn more unsettled with thicker cloud bringing outbreaks of rain for some of us.

“It will certainly feel cooler than over the Easter weekend.”

Britons are warned to wrap up for a significant change in the weather with rain to sweep the country on Easter Monday.

Showers will set in today in Scotland while the rest of the UK enjoys one last day of sunshine and blue skies.

Met Office meteorologist Alex Deakin said: “On Sunday, a weather front will bring some showers over parts of Scotland but generally high pressure and southerly winds will bring a lot of fine weather.

“It will be cooler with some rain on Monday, but there will still be some fine weather.

“This will last into Tuesday and beyond where it looks cooler and more unsettled as low pressure takes control.”

North-easterly winds will trigger a change in the weather through tomorrow as sun-driving high pressure weakens and drifts away.

Britain’s weather will be dominated by low pressure through the rest of the week, according to Weathertrending’s John Hammond.

He said: “After the dry weather brought by high pressure this weekend, there is almost an inevitability that we will slump back into a damper trough of low pressure by the end of the Easter holiday.

“We will then spend much of next week on the northern flank of this low pressure which means that cool north-easterly winds will bring cloudier skies and some showery rain.

“High pressure will move northwards taking the fine weather with it.”

Scotland and parts of northern Britain may hold on to the sunshine slightly longer than the rest of the country, he added.

Maximum temperatures nationwide will struggle to lift much above 15C by the end of the week.

Warm weather over the weekend has spelled misery for hay-fever sufferers causing tree-pollen levels to rocket.

The Met Office predicts high pollen counts across southern and central Britain through this week with medium levels forecast elsewhere.