The UK kicked off this week with scorching highs of 28C in parts of the south on Wednesday. However, the mercury plummeted yesterday, which resulted in the Met Office issuing weather warnings for south-east and central England until 6am on Saturday. But hot air in Europe could soon help temperatures in the UK soar above 20C from next week, according to WXCHARTS’ latest maps.

The same maps then show the red shades of hot air pushing upwards towards south-eastern England on the same day.

The hot air could then send temperatures in Kent, Essex and London soaring to 22C.

Northern regions including Yorkshire and Manchester could also bask in 19C. 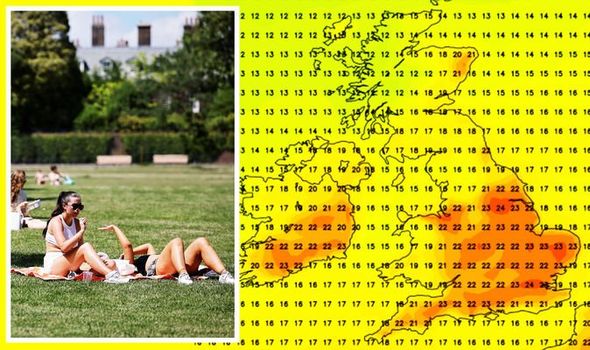 The maps also show the heat lingering until the start of July, with highs of 23C hitting Kent on the first day of the month.

Eastern regions along the country including Lincoln, Grimbsy, Cambridge and Norwich could all average 20C on the same day,

And Cumbria and Newcastle in the north could see 19C.

Meanwhile, Brian Gaze, a forecaster at Weather Outlook, said the rain is expected to subside by the middle of next week, which will allow “brighter periods” to arrive. 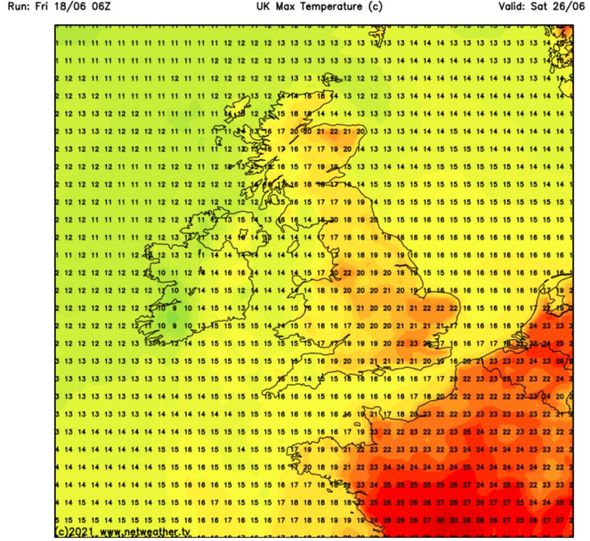 He said: “Through Sunday heavy outbreaks of thundery rain spread northwards. In the afternoon it becomes drier in southern and central regions. Feeling chilly in the wet areas.

“Monday brings sunny spells. There will be showers which could be heavy and thundery in places.

“During Tuesday showers increasingly become focused on central and eastern England. Other regions should have a good deal of dry and bright periods.

“The middle part of the week could bring more settled conditions as high pressure builds in from the west.” 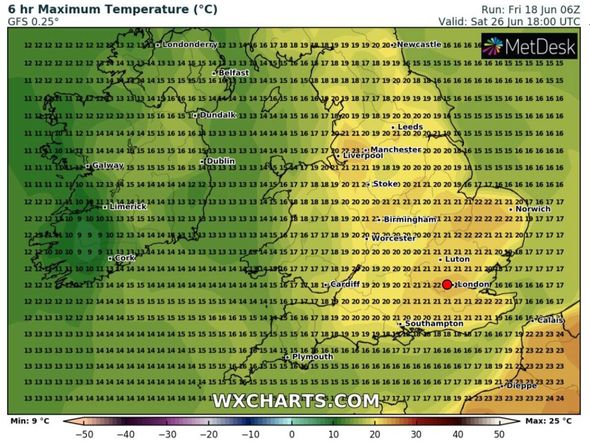 The BBC’s long-range forecast between Monday, June 21, and Sunday, June 27, added next week is expected to start with stormy weather, before high pressure helps send the temperature soaring again.

It said: “Unsettled conditions are most likely to continue through the third week of June.

“A few days of potential heavy showers or thunderstorms are likely early on in the week, mainly for the eastern half of the country.

“Temperatures will be close to or a little below average for late June. 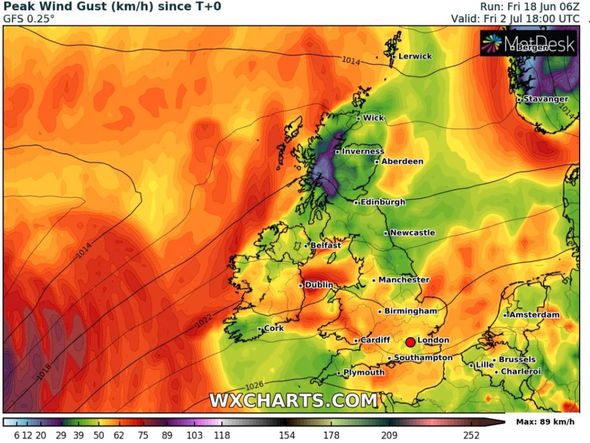 “Later in the week, there are some signs that a high pressure ridge will try to extend eastwards into western Europe again.

“This could cause temperatures to lift a little above normal, although more likely in southern and eastern areas where drier and potentially sunnier conditions could develop.”

The Met Office also said the humid and hot air could cause further thunderstorms, but there will still be “dry and sunny spells”.

The forecast said: “Atlantic air then looks likely to spread across the country from the west through the week, bringing a change to cooler and more changeable conditions. 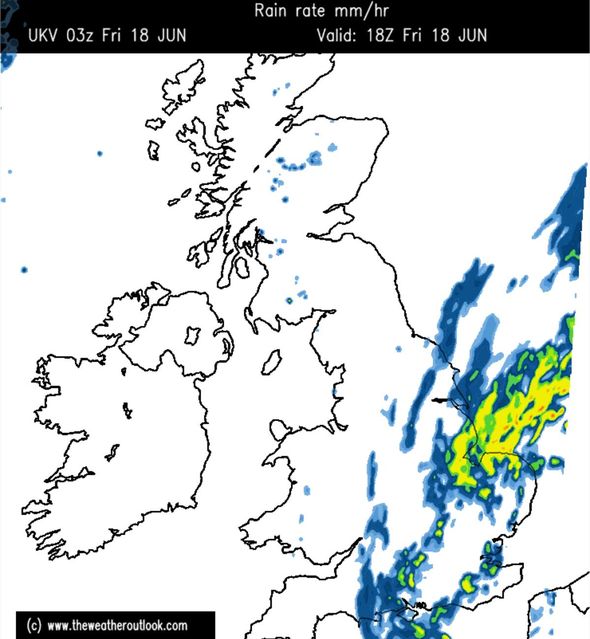 “This will likely bring spells of rain or showers interspersed with periods of dry weather and sunny spells.

“The driest and brightest conditions are likely in the southeast, though further showers or thunderstorms are possible here. Temperatures are likely to recover to near normal by the end of the month.”

Before that, Met Office spokesman Stephen Dixon said parts of East Anglia, the Midlands and the South East could be lashed with up to 2in (50mm) of rain in just two hours on Thursday, and up to 2.8in (70mm) throughout today and into tomorrow.

He said: “Prolonged and heavy rain is expected to spread northwards on Friday, but we’re uncertain about how far north it will progress. Parts of the country could see between 50mm and 70mm of rain.”