The UK is in the midst of a spell of warm, dry weather. Last week parts of the UK saw thundery showers and some strong winds, with a few Met Office weather warnings issued. However this week most of the UK will be basking in glorious heat and sunshine, according to the latest forecast.

Many Brits were greeted by sunny skies over the bank holiday weekend.

But in case you were wondering if the blissful conditions were just a blip, the Met Office predicts the warm weather is here to stay for at least the next week.

Met Office spokesperson Nicola Maxey told Express.co.uk the UK will continue to see “warm and sunny” weather, with temperatures potentially creeping up over the course of the week. 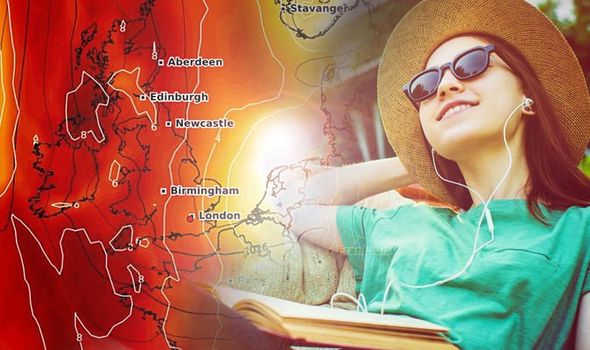 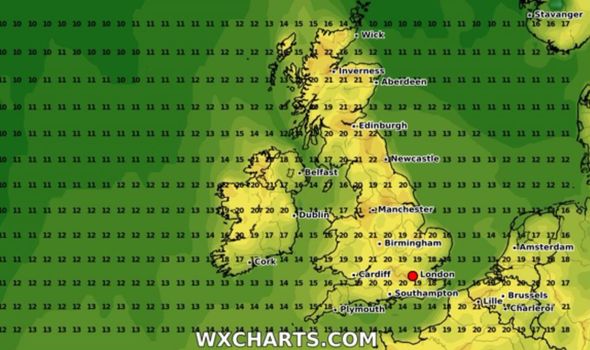 “Quite a lot of sunshine around, some isolated showers in the far north, northwest, but really apart from that everybody is going to see a fairly warm dry sunny day.

“Today London could see temperatures of around 27C, Birmingham between 21 and 22C, and Edinburgh will maybe see 18C, Aberdeen 19C.”

The warm weather pattern looks likely to continue throughout the rest of the week and into the weekend. 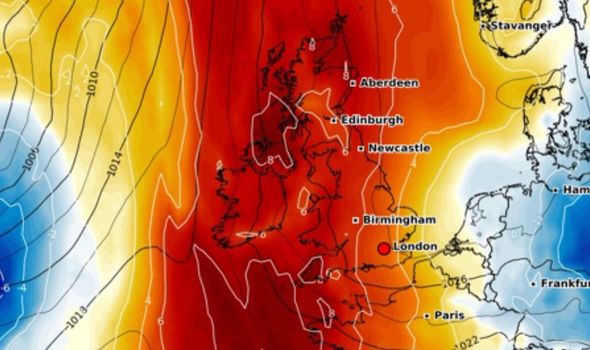 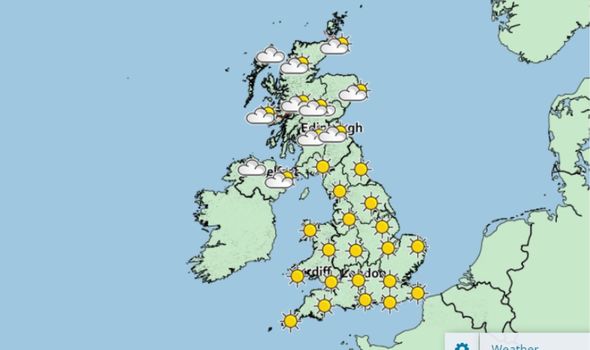 “By Friday we’re certainly looking at temperatures getting up into the mid-teens for Scotland and London seeing widely around 23 to 24C, but an isolated chance of seeing 27C.”

The warm weather will be spread across most of the UK over the coming days, with some parts of the UK forecast to see highs of 28C.

Ms Maxey said: “Quite widely across the country will see these high temperatures.

“Nottingham may see isolated highs of 27C, Norwich 26C, Birmingham quite widely 24C but an isolated chance of 28C.

Motorists could be fined up to £5,000 for driving in hot weather – INSIGHT
Pollen count: Three steps to reduce your risk of an asthma attack – EXPLAINER
Hot weather could have affected initial coronavirus spread in Wuhan – ANALYSIS

“The warmth is across the whole of the country really. We’re going to see this weather into the rest of the week and into the weekend.”

According to the Met Office, the recent warm spell of weather is due to a high-pressure system dominating UK weather patterns.

The arrival of a low-pressure system brought strong winds and thundery downpours for some regions of the country.

But the current high-pressure system is causing clear skies, allowing temperatures to build up and sunny spells to shine through. 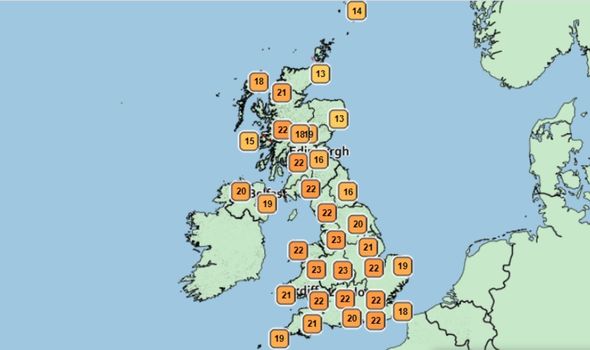 Although confidence is lower for the weeks to come, the Met Office is predicting the good weather could also bleed into the start of next week.

The Met Office long-range forecast for Saturday, May 30 until Monday, June 8 reads: “Much of central and southeast England should see a good deal of dry and settled weather next weekend with plenty of sunshine, though a little breezy.

“Temperatures will generally be very warm, but there is the risk of some thunderstorms breaking out at times.

“Cloud and outbreaks of rain seem most likely for Scotland and some other northern and western areas, where it will probably feel cooler.”

Further on in the period, the Met Office forecast a “shift to a more unsettled regime at first”.

The Met Office added: “Cloud and spells of rain may spread to most parts of the UK, but will predominately remain in the northwest.

“Temperatures should return to around average and may go slightly below in places.”