The alert is in place for the Highlands and Eilean Siar and is coming into place from 5pm today until 10pm tonight. The Met Office said: “Thunderstorms currently affecting mainland Scotland are expected to cross Orkney during the late afternoon and early evening. Some torrential downpours are likely with 25 to 50 mm of rain possible in a few places. Frequent lightning and hail are additional hazards.” 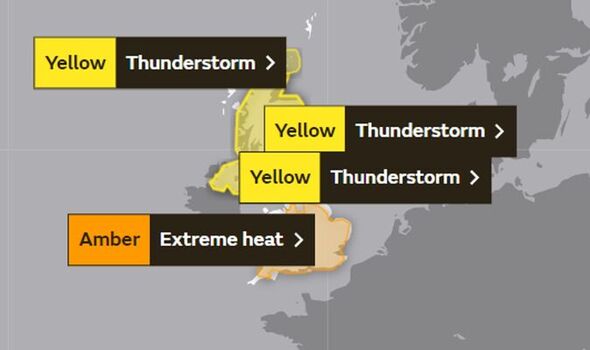 It comes parts of the UK were placed on an amber warning for extreme heat, with temperatures hitting 32C.

The Met Office announced earlier today that the heatwave is set to break with thundery showers across Scotland, with the rest of the UK expecting storms tomorrow.

Writing on Twitter, they said: “The #heatwave is starting to break with thundery showers across Scotland as shown in the latest radar sequence.

“Over the coming days heavy and thundery showers will become more widespread across the country as the hot conditions give way.”

The Met Office warned that the thunderstorms could cause some travel disruption and flooding in some areas.

Met Office Deputy Chief Meteorologist Jason Kelly said: “The current hot weather will make way for a thundery breakdown from the west, which will spread south and east in the early part of next week. Ahead of this, isolated but intense thunderstorms are possible Sunday, Monday and Tuesday.

And the heatwave is not over just yet, with temperatures tomorrow still reaching high 20s tomorrow for the south of the UK.

Forecasters have warned that while some may be looking forward to the downpours and storms, there is a risk of surface flooding following the drought.

A spokesperson said: “With England having had its driest July since 1935 some locations, particulalry in the south, could feel grateful for some rain, but these thundery showers bring with them the chance of some surface water flooding, as the heavy rain falling on to dry ground is often not absorbed.”

He told the Independent: “Experience around the world has shown what can happen when heavy rain follows a very dry and hot period that has baked the soil hard. The water can’t soak in easily, most of it just runs straight off the surface, which can quickly turn into flash floods.”