The UK’s heatwave came to an abrupt end over the weekend, where scorching temperatures were replaced by severe thunderstorms and heavy downpours. Forecasters now warn an “extratropical” storm will sweep across Britain this week, as the remnants of Storm Kyle move in.

Weather forecaster Marko Korosec has warned an unseasonably strong cyclone, caused by the remnants of Storm Kyle, will hit Ireland and the UK at the end of the week.

Storm Kyle formed off the US East Coast over the weekend, and is forecast to head across the North Atlantic and merge with a developing deep over love coming from Greenland – causing severe weather conditions.

Mr Korosec said: “The remnants of tropical storm Kyle will somehow get ingested into a large, strengthening upper low coming from Greenland into the North Atlantic.

“This will cause a rather rapid intensification of both disturbances and form an extratropical storm.” 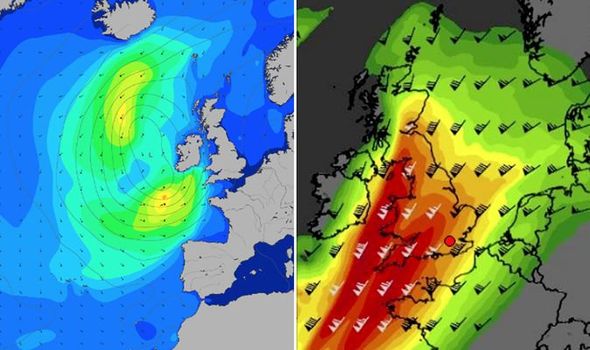 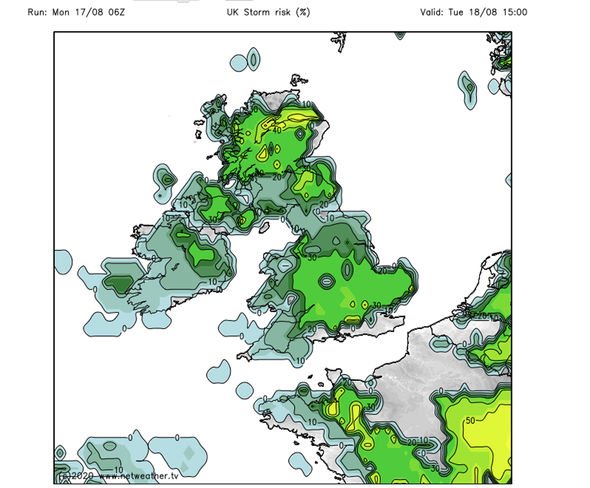 As a result, the forecaster has warned: “This will likely result in an explosive development of unseasonably strong extratropical cyclone.

“The system is expected to blast into Ireland and the UK on Friday.”

Weather maps shows more storms are set to engulf the whole of the UK on Tuesday afternoon, before Storm Kyle batters Britain later in the week.

The chart by Netweather shows much of the UK turn green, indicating a high storm risk. 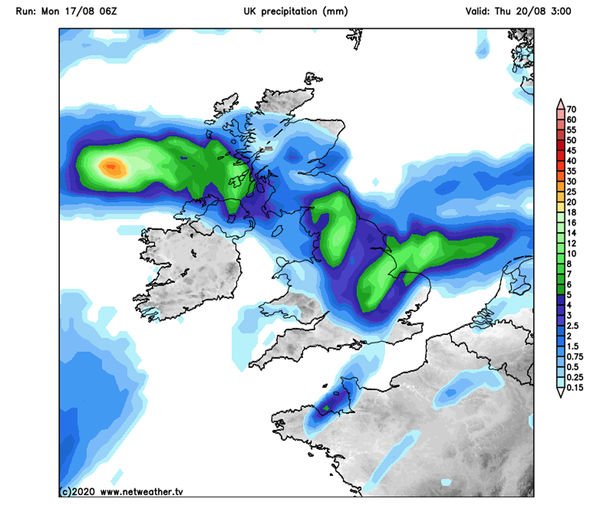 The remnants of Storm Kyle is forecast to reach Ireland from Wednesday, prompting heavy rain and strong winds.

Maps from Netweather also highlight how the weather system will mainly hit the west of the UK and Northern Ireland on Thursday, with the south east expected to miss much of the storm. 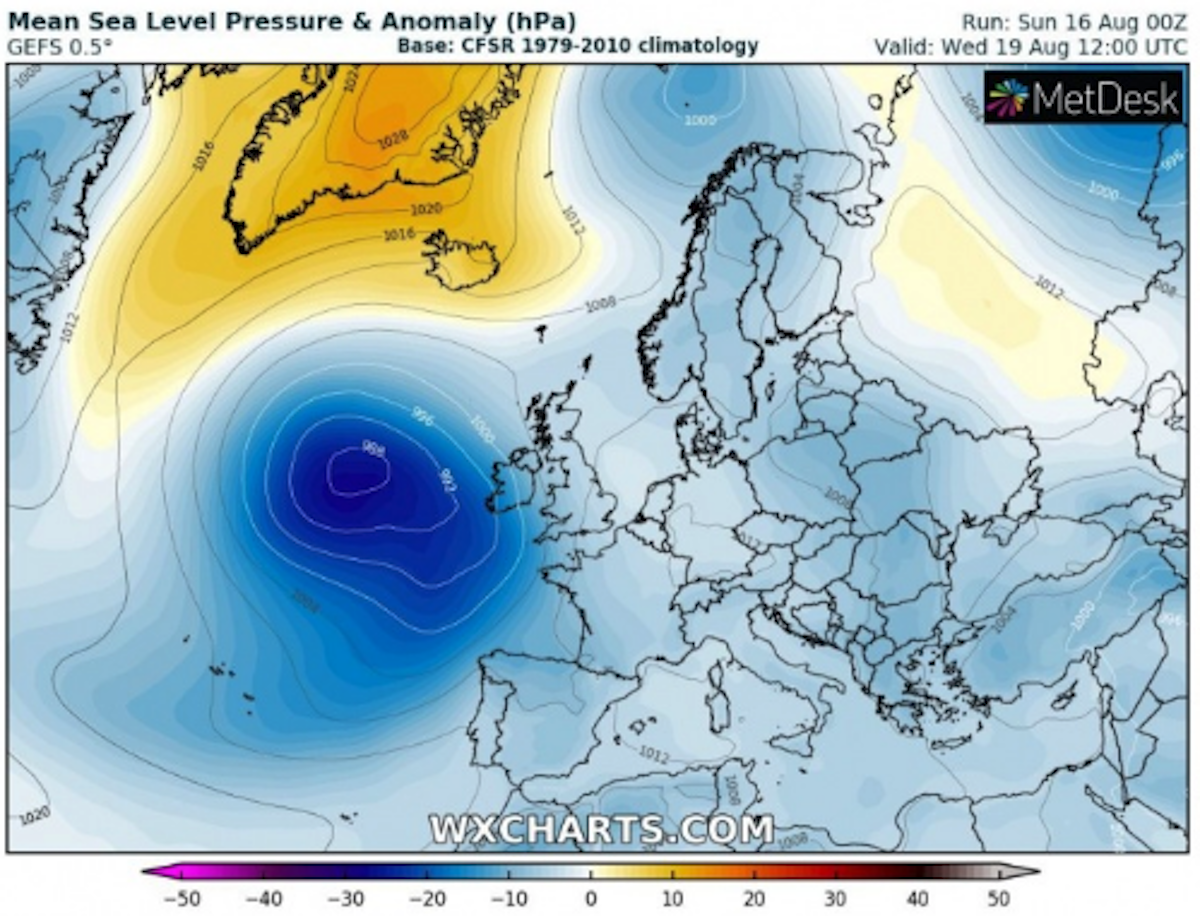 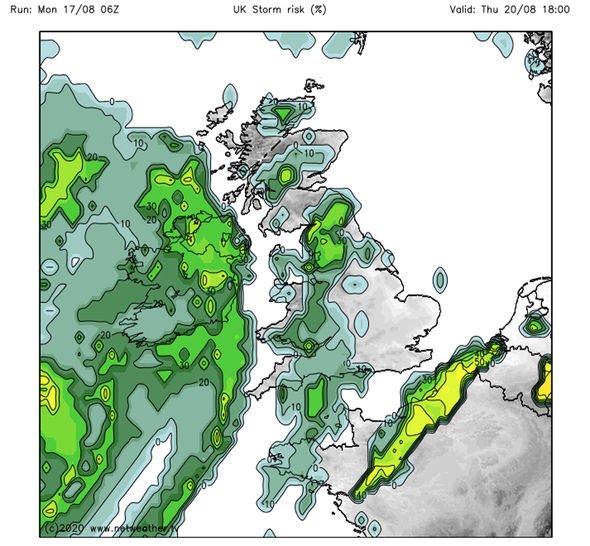 But weather charts highlighting wind speed suggests much of the UK will be hit by strong gusts of wind.

By Friday, the storm will cover much of the UK, particularly Norther Ireland, Scotland, Wales and the west coast.

Temperatures will be much cooler this week, reaching just the early 20s.

Thursday is set to be the warmest day of the week, as the mercury could rise to the high 20s for the east of England. 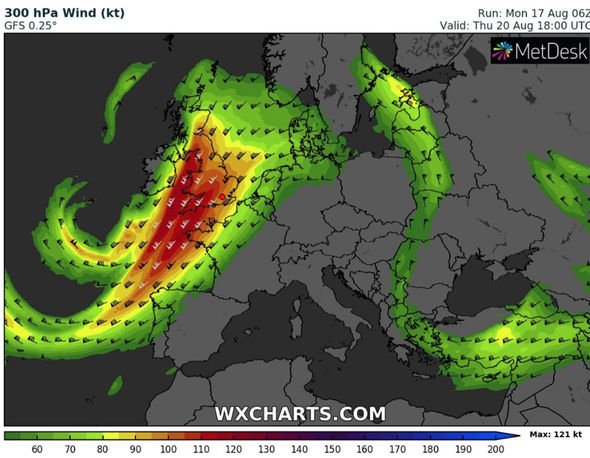 But it will feel significantly cooler to last week’s heatwave, when temperatures peaked at 37C.

The Met Office currently has weather warnings in place covering Monday and Tuesday this week.

Today’s warning covers much of England and Wales, and warns of heavy showers and thunderstorms.

Tuesday’s yellow warning is for rain in Scotland, as heavy downpours are expected.