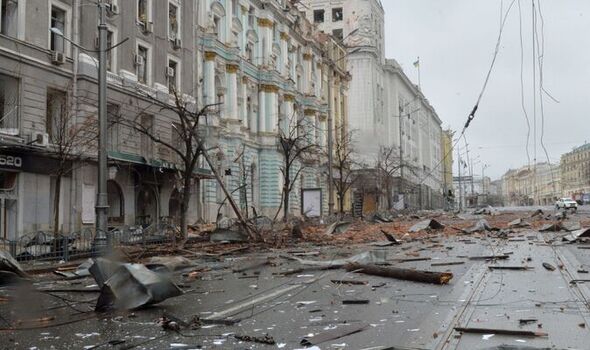 Last week, the Russian President launched a full-scale invasion of the former Soviet nation but his attempts to capture the country have not yet succeeded. However, reports have no surfaced that the Ukrainian city of Kherson has now fallen into Russian hands.

Michael Schwirtz, from the New York Times, tweeted: “Kherson has fallen to the Russian military, becoming the first major Ukrainian city to come under Russian control since the invasion last week.

“The mayor, Igor Kolykhaev, told me he met today with the Russian commander who plans to set up a military administration.”

The Mayor of Kherson said Russian troops were in the streets and had forced their way into the city council building.

Ukraine’s government had earlier played down reports that Kherson had fallen into Russian hands, which would be the first sizeable city to do so since the invasion began last week.

Kolykhayev urged Russian soldiers not to shoot at civilians and publicly called on civilians to walk through the streets only in daylight and in ones and twos.

He said: “We do not have the Armed Forces in the city, only civilians and people who want to LIVE here!”

Since Putin launched his invasion, nearly 836,000 people have fled Ukraine.

On Wednesday, the UN General Assembly voted in favour of condeming Russia’s actions.