Satellite images appear to show that more than 100 vehicles have been moved from the Alakurtti military base near the Finnish border, according to Euromaidan press. The vehicles likely have been moved to Ukraine as Russian losses mount there. Dozens of armoured personnel carriers and other vehicles, along with 800 – 1000 soldiers are reported to have left. Russian expert Marko Eklund said: “It is very likely that they were sent by train to Ukraine.” Russia has not announced any troop movements from the base. 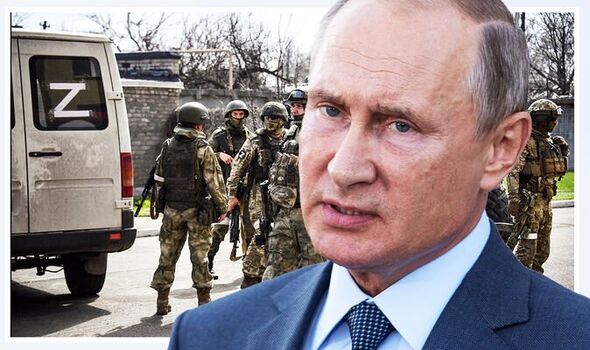 The news comes as Canada became the first NATO country to ratify Sweden and Finland’s request to join NATO.

If Finland joins the alliance, it would more than double NATO’s land border with Russia – a serious blow to Putin who has claimed NATO expansion is a threat to Russian security.

Canadian Prime Minister Justin Trudeau said: “Canada has full confidence in Finland and Sweden’s ability to integrate quickly and effectively into NATO and contribute to the Alliance’s collective defence. We have always welcomed their close partnership with the Alliance and their valuable contributions to transatlantic security.”

RUSSIAN war goals in Ukraine are regime change and territorial expansion far beyond the Donbas, according to the Institute for the Study of War (ISW).

The claims come following comments by Nikolai Patrushev, who echoed Vladimir Putin’s initial war goals when the invasion began in February. Mr Patrushev is secretary of the Security Council of Russia.

The comments make an unlikely ceasefire even less so, as Ukraine has said it is determined to never give up territory to Russia.

Following the capture of the city of Lysychansk, Russia controls all of the Luhansk region, one of Putin’s stated war goals.

Next in the Russian sights is the Donetsk region, which together with Luhansk makes up the Donbas.

However, Ukrainian forces have dug into defensive positions in the area and Russian troops will face an “extremely determined Ukrainian resistance”, according to the Ministry of Defence (MoD).

As Russian forces move to consolidate their forces in Luhansk, it is very likely the next key battle will take place in the Ukrainian held city of Sloviansk in Donetsk.

The MoD said in a tweet: “Russia likely continues to consolidate its control over Lysychansk and Luhansk Oblast. To the north, it has committed most of the remaining available units from the Eastern and Western Groups of Forces to the Izium axis.

“Over the last week, Russian forces have likely advanced up to another 5 km down the E40 main road from Izium, in the face of extremely determined Ukrainian resistance.

“Russian forces from the Eastern and Western Groups of Forces are likely now around 16 km north from the town of Sloviansk.

“With the town also under threat from the Central and Southern Groups of Forces, there is a realistic possibility that the battle for Sloviansk will be the next key contest in the struggle for the Donbas.”