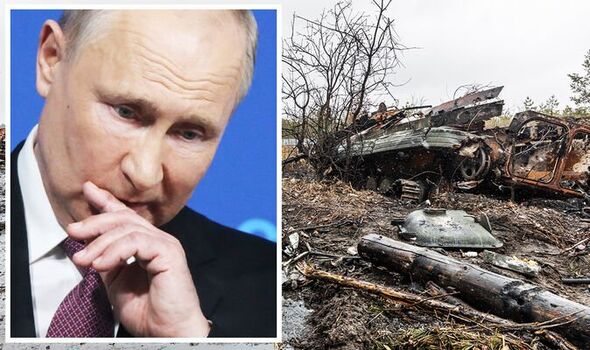 Brutal Chechen leader Ramzan Kadyrov – who is accused of human rights abuses in the Muslim republic of southern Russia – accused Kremlin spokesman Dmitry Peskov of failing to recognise true patriotism amid the ongoing invasion of Ukraine. Mr Kadyrov said: “Something should be done about this.” His thinly veiled threat comes shortly after he also criticised Vladimir Medinsky, the head of the Kremlin’s delegation at talks with Ukraine, over his announcement of the withdrawal from the Kyiv region. A whistleblower known as the Wind of Change from the Russian security services said: “It seems he has decided to go for broke. Kadyrov launched a powerful campaign in the Kremlin to discredit the leaders of the security wing. Now there is such turbulence that he might succeed. If [Putin] gives him the security bloc, even partially, tomorrow he will have all of Russia in his hands.”

Russian forces will need “significant re-equipping and refurbishment” before they can be redeployed in the east, according to the latest intelligence update from the British Ministry of Defence (MoD).

Troops are currently pulling out of areas such as Kyiv and Chernihiv in the north of Ukraine after failing to make any significant progress.

The MoD warns that low-level fighting may continue while forces are withdrawing.

Good morning from London. I’m Tara Fair, I’ll be bringing you all the latest developments on the war between Ukraine and Russia. Please feel free to get in touch with me as I work if you have a story or tips to share! Your thoughts are always welcome.