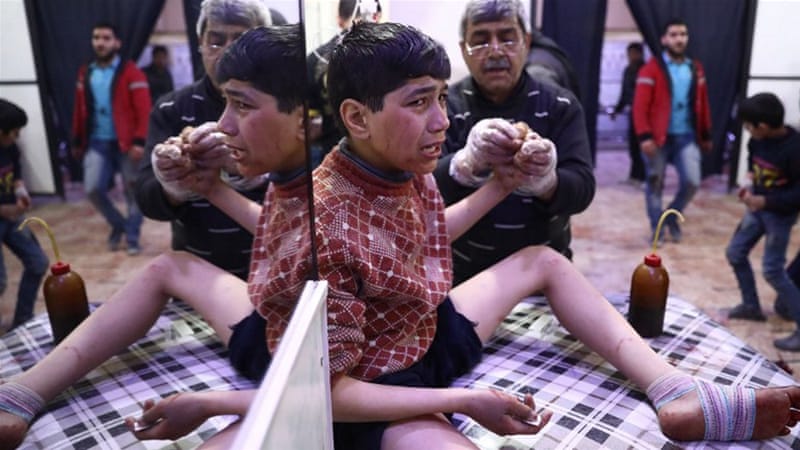 Organisation for the Prohibition of Chemical Weapons (OPCW), the global chemical weapons watchdog, has explicitly blamed the Syrian government’s air force for launching toxic attacks in the country’s western Hama region in March 2017.

The report, the first of its kind released by the OPCW on Wednesday, concluded that poisonous chlorine and sarin nerve gas was thrown over the town of Latamneh at least three times in the month.

“There are reasonable grounds to believe that the perpetrators of the use of sarin as a chemical weapon in Latamneh in 2017 … and the use of chlorine … were individuals belonging to the Syrian Arab Air Force,” OPCW team leader Santiago Onate-Laborde said in a statement.

The attacks on March 24, 25 and 30 killed civilians and medics as well as wounding dozens of people.

A special investigative unit was established by the OPCW in 2018 to identify perpetrators of the illegal attacks.

The detailed report will likely lead to fresh calls for accountability for the government of Syrian President Bashar al-Assad, who is backed by Russia and has been battling opposition factions in the country’s long-running war.

The UN body said it reached its conclusion by conducting interviews with “persons who were present in the relevant places at the time of the incidents”.

It also conducted “analysis of samples and remnants collected at the sites of the incidents, review of the symptomatology reported by casualties and medical staff, examination of imagery, including satellite images, and extensive consultation of experts”.

Al Jazeera’s James Bays, reporting from the UN headquarters in New York City, said that the investigation has been a “very long process”.

The incidents in the report are only a handful of similar attacks witnessed by Syrians in various parts of the country.

On April 4, just days after the attack on Latamneh in 2017, Syrian government forces used the banned nerve agent in a separate attack on the rebel-held town of Khan Sheikhoun in Idlib. The attack killed 87 people. UN investigators later determined the use of sarin gas.

The use of chemical weapons is strictly prohibited by international law.

Syria’s government has denied involvement and claims it no longer possesses chemical weapons following a 2013 agreement, in which it pledged to surrender its chemical arsenal.

Previous reports indicated that Syrian government forces launched other chemical attacks in the war-ravaged country since March 2013, in areas including the regions of Idlib, Hama and eastern Ghouta.

The bloody conflict, now in its 10th year, has killed at least 400,000 people and has driven millions of others from their homes, according to the UN.