Congressional legislators accuse officials of pushing policies that ‘threaten to silence the voices of millions’. 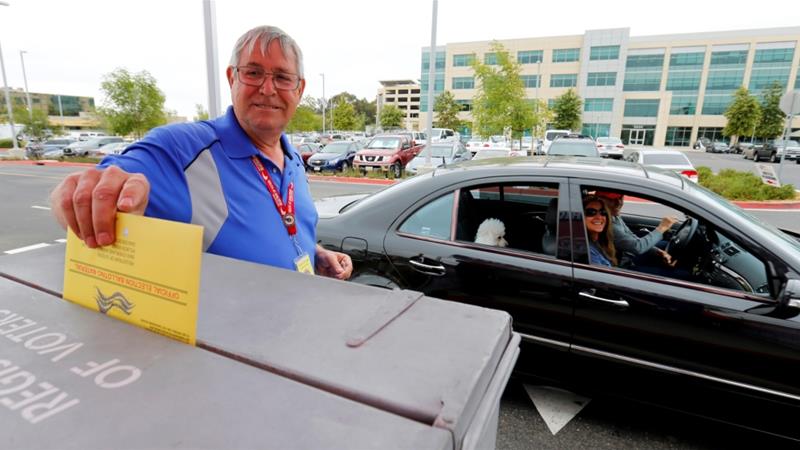 Congressional Democrats have accused the leadership of the United States Postal Service (USPS), including President Donald Trump’s recently appointed postmaster general, of pushing policies that “threaten to silence the voices of millions” in the country’s November election.

In a letter on Sunday, top Democrats including House Speaker Nancy Pelosi and Senate Minority Leader Chuck Schumer called for Postmaster General Louis DeJoy – a major Trump donor who took over the agency in June – and US Postal Service Chairman Robert Duncan to testify on August 24 in front of the House Oversight and Reform Committee.

The move comes amid mounting criticism that the White House is attempting to hamstring the cash-strapped USPS to suppress mail-in voting, which states have been expanding amid the coronavirus pandemic.

“The President has explicitly stated his intention to manipulate the Postal Service to deny eligible voters access to the ballot in pursuit of his own re-election,” the letter said.

The USPS’s internal watchdog recently launched an investigation into recent cost-cutting measures implemented by DeJoy that have slowed mail delivery in the country. DeJoy has said he is modernising the money-losing agency to make it more efficient.

The Washington Post newspaper reported last week that USPS has warned 46 of the 50 US states and the District of Columbia that it may not be able to assure voters’ mail-in ballots would be returned to election administrators in time to be counted under the deadlines in the current state laws.

“The Postmaster General and top Postal Service leadership must answer to the Congress and the American people as to why they are pushing these dangerous new policies that threaten to silence the voices of millions, just months before the election,” the Democrats’ letter said.

Trump has been vocal about his opposition to widespread mail-in voting, repeating, without evidence, that a surge in such voting would lead to fraud. The White House has also cited a possible delay in election results as a reason for its opposition.

On Thursday, the Republican president said he had held up talks with Congress over a fresh round of coronavirus stimulus funding to block Democrats from providing more funds for mail-in voting and election infrastructure.

Trump later walked back those comments, saying he would not veto a bill that included funds for USPS.

Chief of Staff Mark Meadows told CNN on Sunday the White House would agree to $10bn to $25bn in fresh funding for the USPS. Democrats have sought $25bn.

House Speaker Pelosi is also currently considering recalling legislators from a summer recess to address the changes at the agency, a Democratic congressional aide said on Saturday.