Despite half the planet living in lockdown, the virus continues to spread rapidly and claim lives at alarming pace. 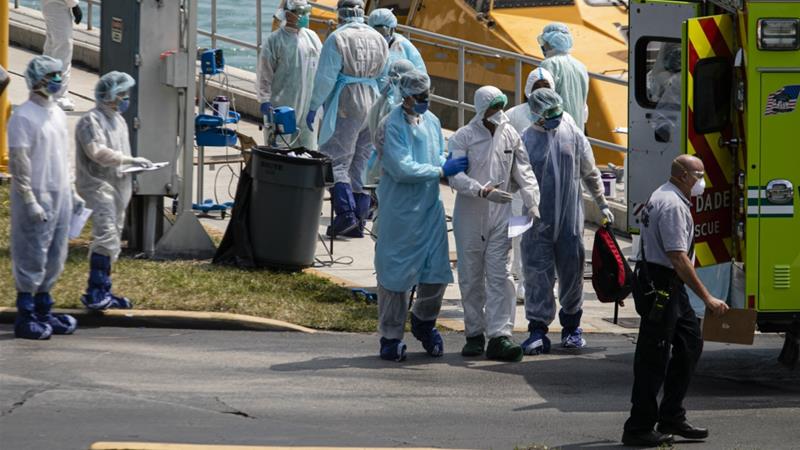 The United States recorded the single deadliest day during the coronavirus pandemic with nearly 1,200 people killed.

The Johns Hopkins University reported early on Friday there were now 6,057 deaths in the US and more than 245,500 confirmed cases.

The grisly statistics came as the number of confirmed coronavirus cases around the world soared past one million, with deaths topping 53,000 globally.

Despite more than half the planet living in some form of lockdown, the virus continues to spread rapidly and claiming lives at an alarming pace with the US, Spain and the United Kingdom all seeing their deadliest days yet.

As the death toll rose, so did the economic fallout. New unemployment numbers showed the outbreak has thrown 10 million Americans out of work in just two weeks in the swiftest, most stunning collapse the US job market has ever witnessed.

Roughly 90 percent of the US population is under stay-at-home orders.

The pandemic will cost the world economy as much as $4.1 trillion – or nearly 5 percent of all economic activity, the Philippines-based Asian Development Bank said on Friday.

At least one million people in Europe are estimated to have lost their jobs over the past couple of weeks. Spain alone added more than 300,000 to its unemployment rolls in March. But the job losses in Europe appear to be far smaller than in the US because of countries’ greater social-safety nets.

Estimates of those in China, the world’s second-largest economy, who have lost jobs or are underemployed run as high as 200 million.

The government said on Friday it would provide an additional one trillion yuan ($142bn) to local banks to lend at preferential rates to small and medium-sized businesses that provide the bulk of employment.

World leaders have announced huge financial aid packages to deal with the crisis, and the World Bank on Thursday approved a plan to roll out $160bn in emergency cash over 15 months.

The US now accounts for about one-quarter of all known infections around the globe, and its death toll is rocketing up.

White House experts say between 100,000 and 240,000 Americans could ultimately die from the disease.

Disaster response agency FEMA on Thursday asked the US military for 100,000 body bags.

In New York, the epicentre of the US outbreak, Mayor Bill de Blasio urged residents to cover their faces when outside, and Vice President Mike Pence said there would be a recommendation on the use of masks by the general public in the next few days.

Europe has been at the centre of the crisis for weeks, but there have been signs the epidemic could be approaching its peak there.

Italy and Spain together account for almost half of the global death toll, but experts say the number of new infections in both countries is continuing to slow.

“The data show the curve has stabilised” and the pandemic has entered a “slowdown” phase, Spanish Health Minister Salvador Illa said.

The virus has chiefly affected the elderly and those with pre-existing medical conditions, but recent cases of death among teenagers and even of a six-week-old baby have highlighted the dangers for people of all ages.

“The very notion that COVID-19 only affects older people is factually wrong,” said Hans Kluge of the World Health Organization on Thursday.

Severe cases have been reported among teens and young adults, with some requiring intensive care and also resulting in several deaths, he said.

In the UK, Prime Minister Boris Johnson promised to “massively increase testing” as his health minister said the aim was 100,000 tests a day within weeks.

Johnson, who has himself tested positive for COVID-19, has come in for criticism for his government’s failure to provide widespread screening, particularly for front line health workers.

France recorded a running total of about 4,500 deaths in hospitals with 471 in the past day. But officials expect the overall toll to jump significantly because they are only now starting to count deaths in nursing homes and other facilities for older people.

France’s Prime Minister Edouard Philippe said he and his government colleagues are “fighting hour by hour” to ward off shortages of essential drugs used to keep COVID-19 patients alive in intensive care.

In Russia, President Vladimir Putin extended paid non-working days until the end of April as the number of confirmed cases jumped by more than 25 percent to 3,500.

Most of the Russian population is on lockdown, while Thailand became the latest country to impose strict measures with the introduction of a curfew from Friday.