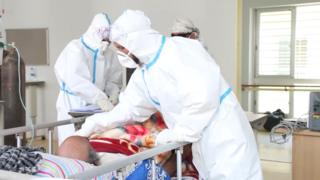 As coronavirus spreads in Afghanistan, the cracks in the country’s healthcare system – already weakened by decades of war – are starting to show. BBC Pakistan and Afghanistan Correspondent Secunder Kermani reports on the country’s worsening Covid-19 crisis.

When Ahmad Shah’s wife developed coronavirus symptoms, he tried to take her to one of Kabul’s government hospitals. But free beds are in short supply in the city, and resources are desperately stretched. Even though she was experiencing breathing difficulties, doctors advised Mr Shah to treat her at home himself.

“One told me, ‘If you truly love her, please take her home and do the treatment there,” Mr Shah told the BBC.

He bought his own oxygen supply and mask. Demand has been so high during the pandemic that the price of cylinders has doubled in recent weeks. They now cost around $200 ($162).

“It’s very hard to find oxygen these days,” Mr Shah said. “It’s not just expensive but you need to know someone in the company selling it to be able to buy it.”

Doctors say the already weak healthcare system in the war-torn country is struggling to cope with the pressure of Covid-19. Concerns have been raised about the supply of oxygen and other resources to government hospitals.

A doctor in Kabul described patients’ families having to “fight for oxygen” when cylinders arrived, before bringing it to the intensive care unit themselves.

There are issues with testing too. Low levels of testing suggest there are “substantially” more Covid-19 cases than the official figures, according to World Health Organization (WHO) representative for Afghanistan, Dr Rik Peeperkorn.

About 31,000 infections have been recorded to date. Close to half of all tests conducted so far have been positive, one of the highest rates in the world.

Dr Peeperkorn told the BBC the number of test laboratories would be expanded from 11 to 21 in the “coming months” and called for greater “global solidarity” in ensuring a regular supply of the necessary equipment.

One doctor, who wanted to remain anonymous, described a worrying lack of staff in a critical-care unit he worked at in a major state-run Kabul hospital.

“One night many patients died because there was no staff to look after them,” the doctor said. He said the patients’ relatives were “furious” and broke windows at the hospital in anger.

The doctor, now working in a private hospital, added that many families were reluctant to seek treatment at public institutions.

“They don’t trust the quality of the treatment,” the doctor said. “They say, ‘take as much money as you want but get our patient admitted.'”

But private hospitals too, he added, are routinely having to turn patients away due to a lack of beds.

Another doctor told the BBC even staff members at his private hospital were unable to get their own family members treated.

“A doctor rang and said, ‘One of my relatives is having breathing problems, we are sending him to you, please admit him.’ I asked him for forgiveness… We couldn’t look after his relative, so think what happens to ordinary people who come here?”

Afghanistan’s healthcare system was already under-resourced before the pandemic – those needing medical care would often travel to neighbouring Pakistan or India for treatment if they could afford it. Many of the doctors who spoke to the BBC blamed corruption for the current lack of staff and equipment in government hospitals.

One described the situation as “frustrating and depressing”.

There has been a spate of investigative reports in local media in the past few weeks, and public anger is rising. Officials are investigating a story by Pajhwok Afghan News, alleging that 32 ventilators were stolen from the Health Ministry and smuggled to Pakistan for sale.

In another case, an employee of the health department was arrested for allegedly demanding an $80,000 bribe in order to complete a contract with a company producing protective equipment for medical staff.

Lotfullah Najafizada, head of Tolo News, told the BBC that corruption was “a huge issue” across the government, but in particular at the moment in the Health Ministry because of the extra resources that have been recently allocated to tackle Covid-19.

“The ministry never managed this amount of money in the past,” he said, adding that the urgency meant “you can’t put an efficient oversight process in place”.

It’s difficult to assess the true scale of coronavirus in Afghanistan.

A doctor working in Kabul suggested the health system might be overwhelmed largely because “capacity is so low”. However, anecdotal reports from graveyards suggest they have seen significant rises in the number of burials.

A sense of stigma attached to the disease means many families are reluctant to acknowledge deaths from coronavirus. One doctor from the southern city of Kandahar told the BBC it was clear even from his own social circle that a large number of people are dying.

“If you look at Facebook, on a daily basis there is an increased number of deaths,” he said.

He said in most cases the deaths were said to be the result of “typhoid” – a bacteria infection – or “unknown causes”, but that he was “100% sure it was due to Covid-19”.

The doctor, who normally treats victims of Afghanistan’s war, said years of conflict and tragedy had desensitised some of the city’s residents to the deaths, which they described as “the will of God”.

Meanwhile, the violence in the country continues, with an increase in Taliban attacks and targeted killings by unknown militants in the capital Kabul. Healthcare workers are at times directly affected. Earlier this month, the charity MSF announced it would withdraw from a maternity unit in Kabul that was attacked by militants in May, killing sixteen expectant mothers, among others.

The UN has also documented a dozen other violent incidents, including the repeated abduction of medical staff by the Taliban, and one instance of government security forces looting medical supplies.

Concerns are also rising about the impact of coronavirus on both levels of poverty in the country, and efforts to tackle other diseases. Afghanistan is one of only two countries in the world yet to eradicate wild polio, but vaccination campaigns have been suspended. In recent weeks polio cases have been discovered in provinces that were previously considered polio free.

Dr Peeperkorn, from the WHO, told the BBC it was crucial that “fragile” progress made in the last decade – in reducing the infant mortality rate, for example – was is not rolled back as a result of increasing public distrust of the health system or a lack of investment due to economic pressures.

For doctors on the frontline, the immediate priority is getting the support they need to look after coronavirus patients. According to the WHO, more than $5 million worth of medical supplies has been procured so far, with $17 million worth of equipment due in the coming weeks. It is much needed.

“It feels really bad to see our own people dying in front of us,” said one doctor, wearily, from the western city of Herat, where the country’s outbreak began.

“We are the same as doctors anywhere else in the world, but we don’t have the beds, staff or resources,” he said.