The highly-contagious virus has infected more than 830,000 people across 202 countries and regions and killed over 41,000 since December, according to AFP. “Without solidarity, we will lose the battle against the new coronavirus,” Mr Lenarcic told French newspaper Le Figaro, as the bloc’s leaders remain bitterly divided over how to respond to the worsening health crisis. “It is true that at the beginning (of the outbreak) there was a lack of solidarity. But the idea that a country can tackle this pandemic alone and have sole control over the situation is an illusion,” he insisted.

“If we act together, we will emerge stronger from this crisis,” Mr Lenarcic continued, adding that the bloc had to “pool all of its resources to manage the pandemic and protect its economy”.

“The virus affects all of us,” he said.

Hundreds of millions of the bloc’s citizens are currently under strict stay-at-home orders imposed by governments last month to slow the spread of the flu-like infection that has killed scores and crippled everyday life.

The novel coronavirus has claimed more than 30,000 lives in Europe alone, a global tally showed on Wednesday.

However, EU leaders have struggled to build a unified response to the deadly epidemic currently running rampant across the bloc. 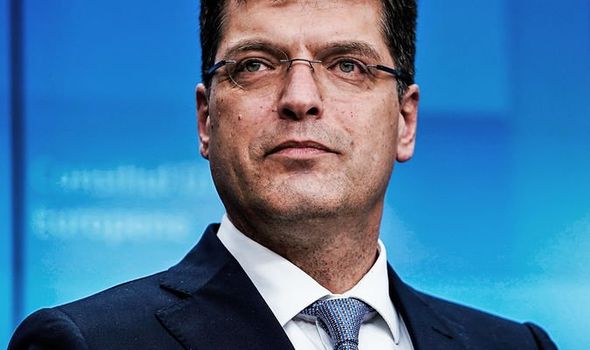 “When European states really needed to be there for each other, too many initially looked out for themselves,” European Commission president Ursula von der Leyen told a parliamentary session last week.

“When Europe really needed an ‘all for one’ spirit, too many initially gave an ‘only for me’ response,” she added.

Divisions between EU states were exposed last Thursday after leaders hit an impasse over how to minimise the economic damage from the crisis and prepare for an eventual recovery, with the poorer south irked by the reluctance of the richer north to offer more support.

Italy, Spain and France – the hardest hit European countries so far – are pushing for the creation of so-called “coronabonds” that would pool the debt of the 19 countries in the eurozone.

But frugal northern countries, led by Germany and the Netherlands, are strongly opposed to what they see as efforts by their southern neighbours to take advantage of the cheap borrowing rates and push long-standing demands for eurozone members to pool public debt.

“Coronabonds,” would, in their view, become a back door to “eurobonds” and could undermine the stability of the single currency.

More than 830,000 people have been infected across 202 countries and regions and 41,000 have died since the pandemic emerged in China in December, according to AFP.