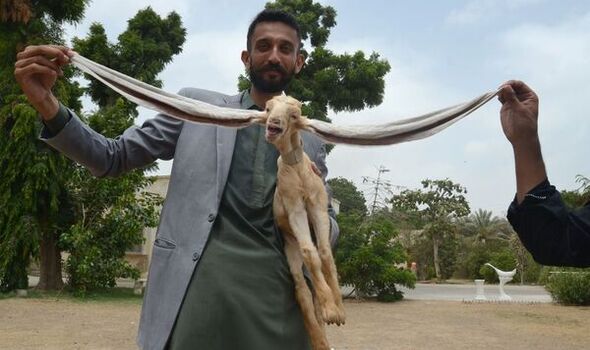 The baby goat, named as Simba, has ears that measure 46cm long, leaving them nearly touching the ground as she walks. Simba, who is just a few weeks old, is a Nubian – a goat breed that is known for its long ears.

Their ears are designed to keep them cool in the hot weather, but Simba has still beaten the world record with her extra long ears.

And her owner, Muhammed Hassan Narejo, appears very proud of her impressive ears, as he shows her off in pictures.

It has been reported that Simba is becoming a “celebrity” in Pakistan thanks to her new world record.

Nubians tend to have long, bell-shaped ears that extend an inch below the face, and small upturned tails.

In Pakistan, the most common type of goat to be found is a Kamori which is found in the Sindh province and in neighbouring India.

Pakistan has been revealed as being the third-largest goat-producing country in the world, with around 54 million goats.

Some breeds are raised for meat and some are used for both meat and milk.
Nubian goats produce a high-quality, high-butterfat milk, which can be drunk or used to make ice cream, yogurt, cheese, and butter.

DON’T MISS:
Why you shouldn’t use whitening toothpaste according to a dentist  [COMMENT]
How Meghan Markle showed ‘the world she was nervous’ [PICTURES]
easyJet cancellations: Full list of affected airports [INSIGHT]

Many people who are allergic to cows’ milk can better tolerate the milk of a goat.

Due to their Middle-Eastern heritage, these goats can live in very hot climates and have a longer breeding season than other dairy goats.

They are the most popular dairy breed in the US.