Home » World News » What makes a gathering a ‘superspreader’ event? 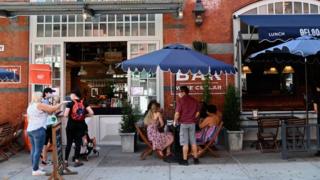 Now months into the US coronavirus outbreak, safety precautions have become routine: stand 6ft (2m) apart, wear a mask, and wash your hands.

But still, certain ‘superspreader’ events – birthday parties, bar nights, and even choir practice – seem to be the culprits in an outsized number of Covid-19 infections.

So how can one night out, or a single infected person, lead to dozens of cases?

We asked Dr Abraar Karan, a physician and public health researcher at Harvard Medical School, to look at three different cases since the US outbreak began to understand how some events can shift from low to high risk, and how to avoid attending a superspreader event yourself.

First, what is a superspreader?

At a superspreading event, the number of cases transmitted will be disproportionately high compared to general transmission, Dr Karan says.

And the risk of these superspreading events may balloon in the presence of superspreading people, who pass on their infection more widely either by being in contact with more people or emitting more of the virus.

“I tend to think of it as this: the vast majority of people may not infect any other people, and some people in certain situations infect a lot of people,” he says. “One person may infect 10 people, or 15 people or 20 people.”

Research is still being done, Dr Karan says, but early results indicate that coronavirus spread is primarily powered by these supercharged events.

“Different models have looked at this and they suggest that 20% of people account for 80% of spread.”

And while risk profiles will vary widely between similar events, Dr Karan says there are certain factors that should raise a red flag.

“If you have any of the following in combination: indoors, crowded, closed spaces, without any sort of personal protective equipment like masks, which you’re not going to have eating – I think those are all high-risk,” he says.

Back in March, early in the US outbreak, 61 members of a choir group in Skagit County, Washington, met for their weekly choir practice. One person at the two-and-a-half-hour meeting displayed cold-like symptoms.

Days later, after an investigation by the US Centers for Disease Control and Prevention (CDC), 53 Covid-19 cases were identified – 87% of the group that had assembled to sing. Two members of the group later died.

During the 10 March rehearsal, chairs were arranged in six rows of 20 chairs each, spaced 6-10 inches apart, according to a report by the CDC. Members took their usual rehearsal seats, with some space left over by the roughly 40 people not present that night. Some shared snacks during a 15-minute break, though no member reported physical contact between those present.

In this case, the key factor is likely the group’s reason for meeting: to sing.

When you sing, similar to when you speak loudly or shout, you expel respiratory droplets from you mouth and nose, Dr Karan says.

“When you really are breathing out heavily from your airway you’re producing more aerosol, smaller droplets that can hang around in the air,” he says.

In the Skagit County choir, the initial sick member could have expelled these droplets as they rehearsed, which then hovered in the air as members sang and socialised for more than two hours.

On 30 May, the Barbosa family gathered in a group of 25 for a surprise birthday party. The north Texas family told US media that the host was unknowingly infected with Covid-19.

By the end of June, family member Chance O’Shel said that eight family members and 10 friends of the family had contracted the virus, including grandparents Frank and Carole Barbosa, who were approaching their 68th anniversary.

“They were even more cautious than they were before, but it still lead to my grandma, grandpa and aunt in the hospital,” Mr O’Shel said of the gathering to local TV station KAVU.

To Dr Karan, a birthday party similar to that of the Barbosa family’s could have all the ingredients for a superspreading event.

“You can imagine if you’re indoors at a birthday party, there’s a lot of close contact there,” he says. “There’s also people maybe lining up to use the restroom”, crowding together in small hallways where social distancing is impossible.

“We’re asking people to change their behaviours, we’re asking people to do things that are not natural to them”, to help curb the spread, Dr Karan says. “If you introduce things like alcohol, it’s more likely that people revert to their normal behaviour, they’re less inhibited so they may forget.”

And it matters who was initially infected, he explains. When the index case is someone central to the gathering, someone familiar with the guests – like the host of a party, as was the case at the Barbosa birthday – that added intimacy and contact may contribute to extra infections.

On 8 June, the owners of Harper’s Restaurant and Brew Pub – a 10,000 square foot indoor restaurant with a large outdoor deck – opened its doors after weeks of Covid-19 closures.

Managers provided training on safe practices, tables were pushed six feet apart and capacity was limited to around half of its typical crowd, allowing for approximately 225 customers.

But as of 2 July, a reported 152 infections in 13 counties across Michigan have been tied to Harper’s. Of these cases, 128 reported they were present at the restaurant between 12 June and 20 June, and the remainder are close contacts of those who did.

Heading to an indoor bar or restaurant may bring you into some risky territory, Dr Karan explains.

Similar to a birthday party, food may be a factor.

If loud music is playing, or a crowded venue makes it difficult to hear, loud speaking will also pile on some risk, “like a party in overdrive”, Dr Karan says.

The high temperatures that come with summer will add yet another complication, he says.

Add in the use of public restrooms, several high touch-point areas like doorknobs, and you have ready-made potential for superspread.

“I think taking precautions is important,” Dr Karan says. “But at the end of of the day, no matter how many precautions you take, some things are just high-risk, and I think bars are one of those things.”