A few things we know about Kanye West.

As a rapper and producer, he has made some of the best-selling and most acclaimed music of our era. His marriage to a reality TV star has made him part of one of the most famous celebrity couples on the planet. He is a father and a successful fashion designer. He is not afraid of speaking out or courting controversy. He once accused President George W Bush live on air of racism and said the current incumbent has “dragon energy”. He caused outrage by humiliating Taylor Swift on stage. Most recently he announced, not for the first time, that he is running for the US presidency.

All of this and more have made him a figure of enormous public interest.

Here’s one important thing we don’t know about Kanye West – the inner workings of his mind.

That this remains unknown should be remembered in the light of a much discussed campaign launch and a follow-up series of tweets.

The rally, and social media messages, have sparked alarm. Some people have mocked him. His behaviour has been called a “meltdown”. So what to make of his latest actions?

West’s situation is complicated by the fact that he has been candid about his mental health.

Last year, he stated he had bipolar disorder, describing being in a “hyper-paranoid” state and pleading for understanding.

“It’s a health issue that has a strong stigma on it and people are allowed to say anything about it and discriminate in any way. This is like a sprained brain, like having a sprained ankle. And if someone has a sprained ankle, you’re not going to push on him more,” he said.

“As many of you know, Kanye has bi-polar disorder. Anyone who has this or has a loved one in their life who does, knows how incredibly complicated and painful it is to understand,” she wrote.

He is a “brilliant but complicated person” whose “words sometimes do not align with his intentions”, she added.

The condition, although varying in its symptoms and severity for individuals, can cause extreme mood swings, with patients suffering both depression and high-energy “manic” phases.

Stick to what you know

The overwhelming message from mental health experts is that, no one, not even professionals, should try to guess what an individual is going through, however famous they are.

Speculation should be avoided, they say, not just for the good of a person in the public eye but for the wider understanding of mental health. 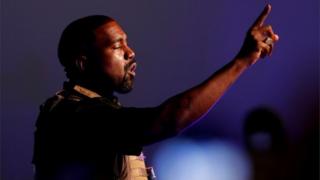 “You’ve got to think about all of the other people in the world who may be struggling with similar sorts of issues and think about what it means for those problems to be dragged up in the public eye,” says Peter Kinderman, Professor of Clinical Psychology at the University of Liverpool.

Prof Kinderman says unusual behaviour can be scrutinised but it is important not to link it to mental health conditions.

“If it were to be the case that a particular candidate for president was rambling and incoherent, say that he was rambling and incoherent. Give the evidence. If you think there is evidence that somebody is making bizarre and unsubstantiated claims, then say they are making bizarre and unsubstantiated claims. Whether or not somebody decides that that meets the criteria for a so-called mental illness of bipolar is another matter.”

“Stick to the facts, stick to what people do, and don’t speculate to potential psychiatric causes of people’s behaviour,” he says.

Be kind and constructive

For counselling psychologist Dr Carolyne Keenan, a celebrity raising awareness about mental health and sparking a discussion can have a positive impact.

But she says the condition needs to be separated from the figure.

“We have no idea who is in control of his social media accounts. So we take it at face value what’s being put out into the world wide web are his words but actually, we don’t know,” she says.

“We have no idea what this man, the actual human man behind the celebrity face, is experiencing or going through.”

“I think everybody – members of the public, celebrities, need to remember that they don’t know the full story. And so even making comment is really difficult because you don’t know what you are commenting on.”

“Sensationalising these difficulties whether they are members of the public or celebrities is really problematic for anyone who is experiencing mental health because it gives a very small picture of what might be going on.”

People should respond with “curiosity and kindness” if they feel they need to respond at all to West, she says.

Or just don’t say anything at all

The idea of kindness might be anathema to the often brutal world of celebrity news and social media but despite the negative posts there has been a swell of concern and a wider discussion of the issues involved.

Some commentators saw an element of hypocrisy amid the sympathy, pointing to the jokes faced by singers Azealia Banks and Britney Spears, who also faced public questions over their mental health.

Others expressed concerns about attaching labels.

we should still be mindful how we’re discussing mental health, accountability, and ableism.

One of the most shared responses came from singer Halsey, who called for understanding while admitting her own struggles with bipolar disorder.

No jokes right now. I have dedicated my career to offering education and insight about bipolar disorder and I’m so disturbed by what I’m seeing. Personal opinions about someone aside, a manic episode isnt a joke. If you can’t offer understanding or sympathy, offer your silence.